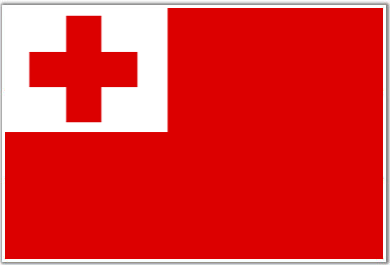 Real economic growth in Tonga has been slow for the past decade, averaging a little over 1 percent per annum (Figure 1). However, the last three years have shown some improvement, with an average of more than 2 percent growth, and with 2010/11 on its own recording 4.7 percent growth. This recent growth has been supported by exceptional amounts of development partners’ assistance, mostly through aid-funded construction, and the associated addition of incomes earned by the foreign-aid construction workers that have been in Tonga for more than 12 months. 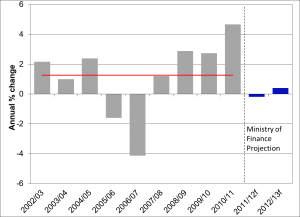 While these recent growth figures have been promising, the Ministry of Finance projects that our economy will slow in the foreseeable future as our partner support is expected to wane. In any case, the flow-on effect to the overall population from recent growth has been limited. 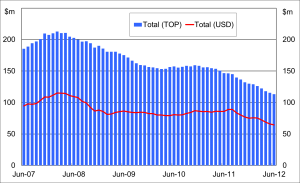 Another reason for Tonga’s bleak economic outlook is an ongoing decline in remittance flows. Remittances have traditionally propped up the Tongan economy, accounting for around 30 percent of GDP in 2008. Since 2008, remittances have fallen by $100 million (Figure 2), equivalent to almost 15 percent of GDP in 2011. This is largely a result of the global financial crisis and its impact upon developed countries, particularly the US, New Zealand and to some extent Australia.

Exchange rates have also had an impact. More than half of our remittances are denominated in USD, and since the Tongan currency (TOP or Pa’anga ) has recently appreciated against the USD, converting USD remittances into Pa’anga now gives us less Pa’anga than it once did. 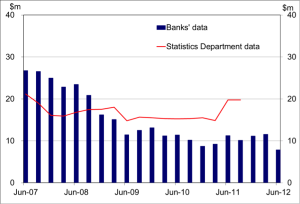 Figure 3: Annual export receipts have fallen by T$20m since 2007

Tonga’s exports have always been small and are also in decline, though different data sources tell different stories (Figure 3). According to the banks’ overseas exchange transactions data, exports declined from 3.5 percent of GDP in 2008 to 1.5 percent in 2011. By contrast, imports are almost 30 percent of GDP. A large part of the fall in exports over recent years is due to the loss of the squash market. Another factor is the deteriorating economic conditions overseas. Short-term export prospects are also limited as natural resources, such as sea cucumber and sandal wood, become less available.

Fortunately, the news on our export market is not all doom and gloom. Tourism is showing potential to support growth in the medium to long term. But in order to maximise the benefits of tourism, related sectors like agriculture and fisheries need to be developed simultaneously to support it and to minimise leakages through imports. 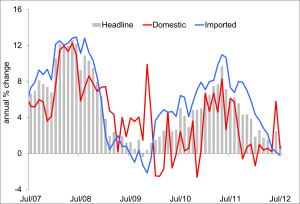 Inflation, heavily dependent on the prices of imports, has declined markedly in recent years (Figure 4). This is a reflection of the downward trend in world oil prices: almost all of our electricity is sourced from diesel generators that run on oil shipped from Singapore. 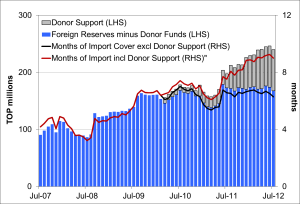 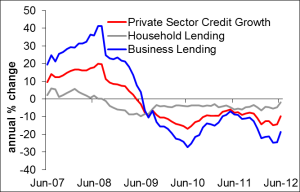 The combination of the National Reserve Bank of Tonga’s (NRBT) recent economic stimulus and generous donor support has allowed liquidity to grow to unusually high levels, with banks’ exchange settlement accounts now sitting at around 15 percent of GDP. So liquidity is certainly not a restraint for economic development. 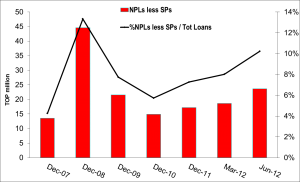 Despite this, lending to both households and businesses has been declining and credit growth remains negative (Figure 6). This can be explained by the high level of non-performing loans (Figure 7): an unusually large number of borrowers went into default from 2008 onwards. Efforts so far by the National Reserve Bank of Tonga (NBRT) and donors have not been enough to outweigh the forces that have been reducing the banks’ appetite to lend, particularly the decline in asset quality. 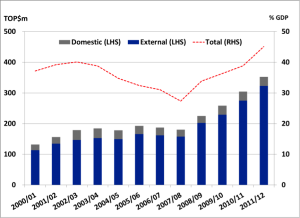 The government has also unfortunately used most of its capacity to stimulate the economy thanks to a record number of expansionary budgets. Given the debt level –  approaching 50 percent of GDP (Figure 8) – the government has adopted a ‘no further borrowing’ strategy.

The NRBT and central government have exhausted their policy tools by progressively easing monetary policy since 2008 and implementing expansionary budgets. Within this context, the NRBT launched a two-day conference in March of this year under the title ‘Economic Dialogue’. Stakeholder discussions and a survey we conducted in the lead up to this highlighted three main areas of concern:

The two day dialogue produced specific strategies and actions to meet these concerns, including the creation of a National Growth Committee to consider the suggested actions, some of which have been put into this year’s budget.

What next for Tonga?

The key challenges facing our economy are:

On balance, recent economic developments in Tonga have been negative and our economy is in need of a lot of support. If we are to avert a bleak economic future, we need to stop our reliance on private remittances and become more productive.

This is a part of our blog series summarising presentations delivered at the 2012 Pacific Update. The rest of the series can be found here.

Siosi C. Mafi is the Governor of the National Reserve Bank of Tonga. This post is a summary of her presentation (powerpoint available here, video here) to the 2012 Pacific Update.

Siosi C. Mafi is the Governor of the National Reserve Bank of Tonga.