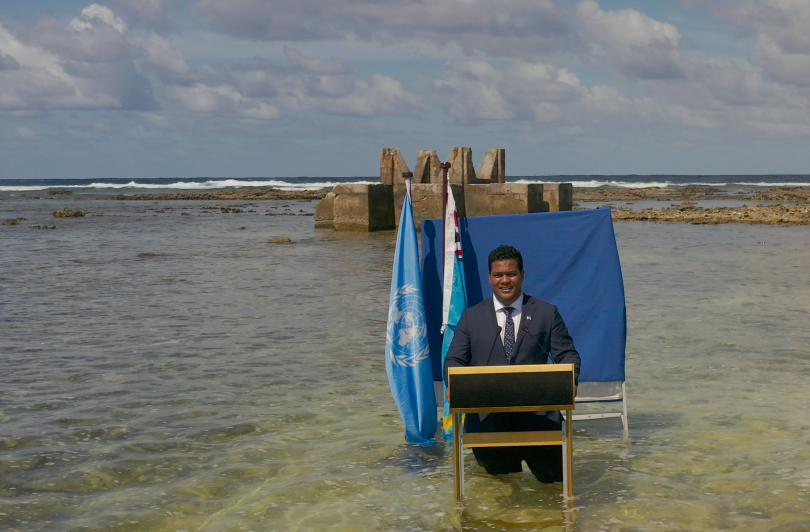 Wednesday 27 October marked the official national launching of Tuvalu’s Future Now Project (or Te Ataeao Nei Project in Tuvaluan), a new initiative by the Ministry of Justice, Communication and Foreign Affairs. The project takes a proactive stance toward what has been highlighted as the potential worst-case scenario for Tuvalu under climate change – Tuvalu’s threatened disappearance as sea levels rise and lands are submerged.

In full disclosure, as the Minister for Tuvalu’s Ministry of Justice, Communication and Foreign Affairs, I have a vested interest in promoting the Future Now Project. However, the launching of the project has prompted me to further reflect on its three major initiatives – promoting values-based diplomacy, ensuring the permanency of statehood and maritime boundaries despite the effects of sea level rise, and building a digital nation – and what these say about Tuvalu, climate change, and Pacific regionalism.

The project’s first initiative promotes diplomacy based on Tuvaluan values of olaga fakafenua (communal living systems), kaitasi (shared responsibility), and fale-pili (being a good neighbour), in the hope that these values will motivate other nations to understand their shared responsibility to address climate change and sea level rise to achieve global well-being.

A values- or culture-based approach to diplomacy is not new for Tuvalu, and is well reflected in the country’s 2020 Foreign Policy Te Sikulagi. Recent academic projects on “oceanic diplomacy”, which explore the diplomatic practices and principles that have come out of the diverse cultures of the Pacific, suggest a similar and more regionally focused appetite for this approach to international relations. From a high-level conceptual perspective, Tuvalu hopes that by proactively asserting its communal values system within international diplomacy, there is an opportunity to reverse the inward-looking and nation-centred approaches that have allowed climate change to so decisively take hold of and threaten us all.

The second and third initiatives under the Future Now Project are the more pragmatic ones. Although Tuvalu stands against relocation as a solution to the climate crisis, in seeking to be proactive and practical, the project responds directly to the question “What will Tuvalu do if its land territory is lost to sea level rise?” Consequently, the project’s second initiative pursues domestic, regional and international legal avenues to ensure that, should Tuvalu’s land territory be lost to sea level rise, Tuvalu’s existing maritime boundaries and claims will remain intact, and Tuvalu will still be recognised as sovereign.

Whereas the first initiative is dependent on an optimistic view of a global community that will come together to combat climate change in recognition of the importance of Tuvaluan values, the second realises the very real possibility that Tuvalu may not be able to “wait for the world to get its act together” to solve the thorny issues of statehood and territory under climate change. This again aligns with moves at the regional level.

Domestically, Tuvalu has already begun using new joint communiques when establishing diplomatic relations that provide for bilateral recognition of Tuvalu’s statehood and maritime boundaries as permanent. Regionally, leaders of the Pacific Islands Forum have this year inked the Declaration on Preserving Maritime Zones in the Face of Climate Change-related Sea-Level Rise, which seeks to ensure that Forum members’ maritime zones cannot be challenged or reduced in the face of climate change. Obviously, Pacific nations will always work at the international level to gain global consensus on climate change solutions, but there is also clear realisation that bold steps must be taken at the national and regional levels now – waiting for others to resolve the legal and political unknowns climate change has caused for those threatened with land loss is not an option.

The third initiative under the Future Now Project is similarly pragmatic, and comes as an extension of work under the second initiative. It looks more at the question “What will Tuvalu do if it gains recognition of its statehood as permanent but its land territory is lost to sea level rise?” Basically, how will Tuvalu continue to function as a nation with no land? Here, the solution is to rapidly adopt innovative digital tools and platforms, and build a digital nation. This would involve creating a digital government administrative system that could, in the very worst-case scenario, allow Tuvalu to shift its government operations to another location and continue to fully function as a sovereign state. It also looks toward national efforts to preserve and digitise historical documents; records of cultural practices; and other important texts, images, or multimedia that should be protected in the face of climate-induced disasters. And the idea to “go digital” is not isolated to Tuvalu alone – there have, of course, been efforts throughout the Pacific toward digital transformation, although Tuvalu may be among the first to link the effort to climate mobility.

Tuvalu’s Future Now Project, and its links to Pacific regional initiatives, reflect two phenomena in advocacy on climate change for those countries most affected by this threat: (1) a view to continue work towards influencing and shaping the mindsets of the global community on climate action, while clearly signalling that those most affected by climate change are more than willing to take bold steps by themselves to help themselves; and (2) recognition that, as the dire and unceasing impacts of climate change become more and more clear, there must be immediate movement to develop innovative solutions in the face of extreme worst-case scenarios. The tagline for the Future Now Project reads “preparing today to secure tomorrow” as a reflection of both phenomena.

Simon Kofe is the Minister for Justice, Communication and Foreign Affairs for Tuvalu.