Despite its openness and smallness, Vanuatu’s economy has been performing well over a number of years. It had weathered the global financial crisis and the political instabilities that the various governments have gone through. Sustaining this growth in the medium term is the key. In this post, I shall briefly discuss the economy and its prospects and assess briefly whether this growth is sustainable.

Past, present and future economic growth 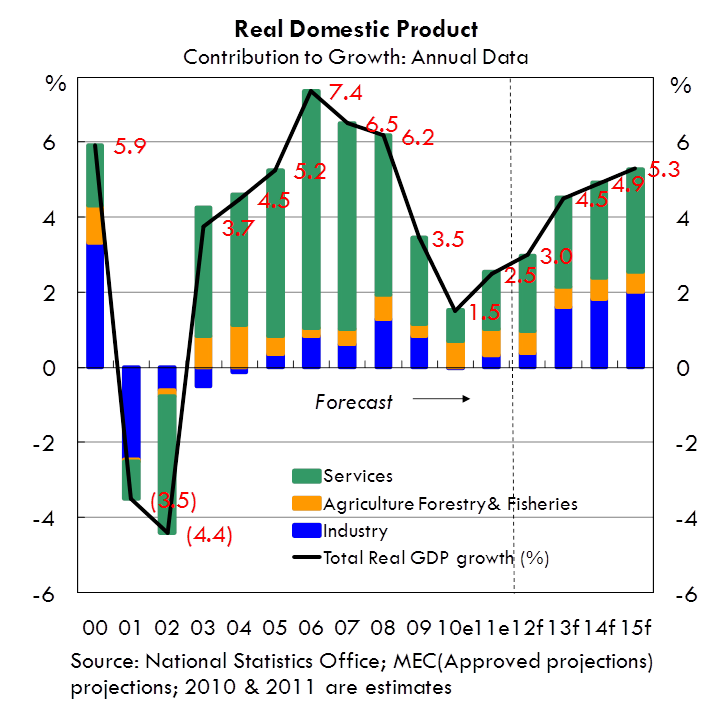 From 2003 to 2008 the economy of Vanuatu grew at an average rate of 6 percent. This is a huge contrast compared to the two decades after independence where growth had been poor and income per capita declining. The dismal performance during earlier decades was attributable mainly to political instability and weak governance institutions and arrangements. As a result of this poor performance, the Government adopted the Comprehensive Reform Program (CRP) in 1997 under the auspices of the Asian Development Bank (ADB). These reforms, and others that came after such as the liberalisation of telecommunications and air services, coupled with political stability resulted in higher growth.

From 2009 to 2011 economic growth declined markedly to an average of around 2.5 percent. This was attributable to: major public projects coming to an end, such as the US-funded Efate ring road and Santo East Coast road; increasing competitiveness in tourism products from other Pacific Island Countries such as Fiji and the Cook Islands; and the lagging effects of the global financial crisis. These shocks were largely experienced in the real estate sector. Agricultural sector production also declined during this period, mainly due to a fall in world commodity prices.

2012 will be the ninth year of recording positive economic growth, estimated to be over 2 percent. The services sector, comprised mainly of tourism, is expected to be the driver for this growth. In terms of the medium-term outlook for the domestic economy, it is anticipated to remain positive.  This will be mainly attributable to these factors:

What is important now is for the Government to continue with its policy and economic reforms as recently highlighted in the National Trade Policy Framework (available here[pdf]).  This policy framework focuses on trade as an engine for growth. In addition, to date economic growth has not sufficiently translated into better development outcomes. As it stands the Vanuatu Government may find it difficult to meet its Millennium Development Goals target by 2015.

Generally, inflation in Vanuatu remains low and continues to be within the Reserve Bank of Vanuatu’s target range of 0-4 percent. The years where inflation was high was mainly due to an increase in aggregate demand associated with increased growth and increases in imported food and fuel prices. This was especially the case from 2007 to 2009. 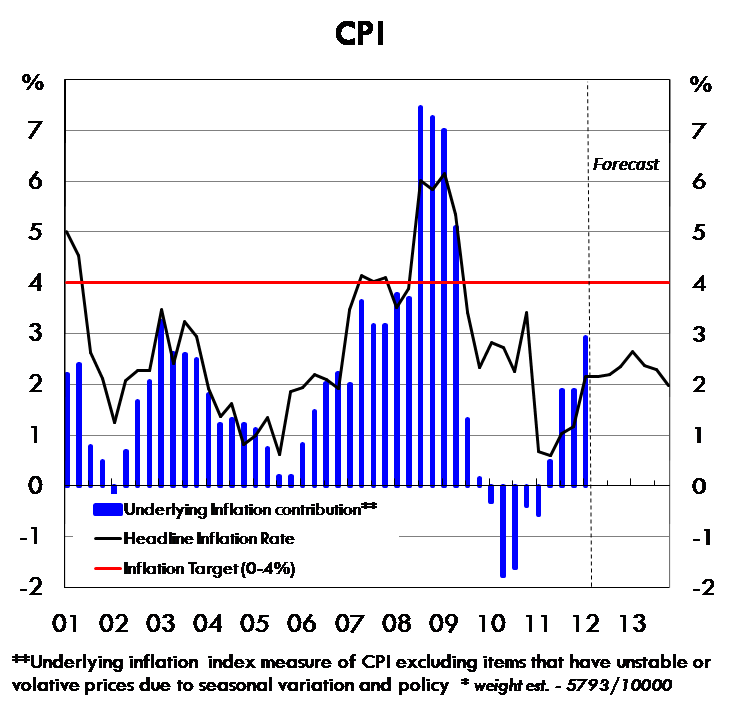 Inflation in the current year is estimated to remain within the target band of 0-4 percent. In the first quarter of 2012, it registered 2.1 percent and is expected to remain low throughout the year.

The balance of payments in Vanuatu consistently record current account deficits. This is a result of persistent trade deficits recorded over the past years. Imports are four times larger than exports and this imbalance is mainly funded by a surplus in the financial and capital account of the balance of payments, which comes mainly from donor funding and foreign direct investment flows.

Foreign exchange reserves are growing (see graph below). The months of import cover provided by reserves is comfortable, hovering above six months, well above the target of 4 months. 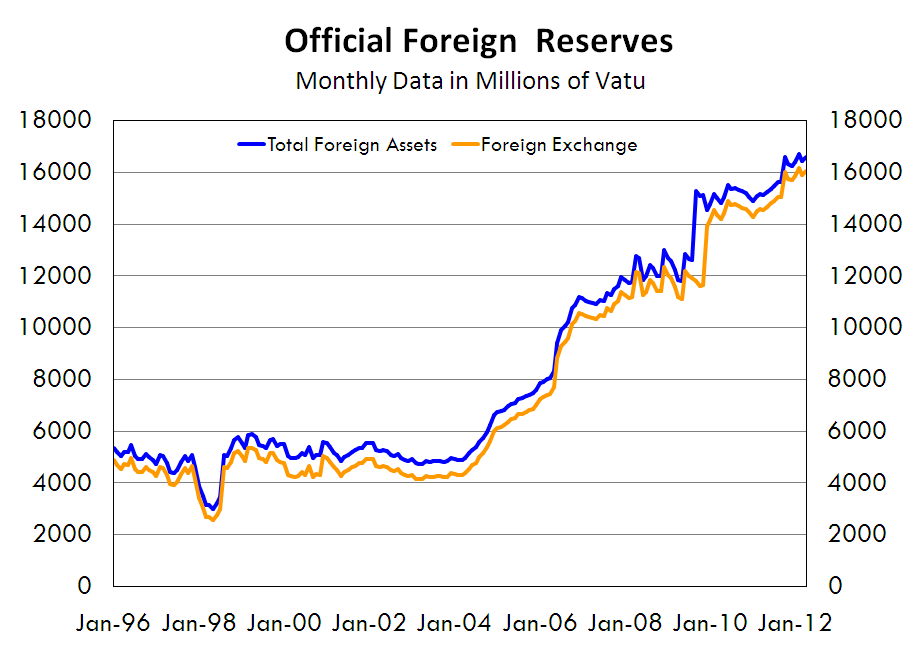 On the fiscal front, the Government budget has continue to record a deficit since 2010. These deficits, though manageable, need to be addressed immediately and the current Government stance of a return to a balanced or surplus budget in the medium term is a welcome development. The reasons for these deficits stemmed mainly from major fiscal challenges experienced by the Government. The economy slowed down markedly which was reflected in revenue yields declining, though this was also in part associated with low compliance. Government spending also continues to increase rapidly exerting pressure on the cash flow management of the Government. Despite these dactors, debt to GDP remains at a respectable rate of just over 30 percent.

It is to be stressed that the increasing demand for services for a growing population coupled with a narrow tax base is challenging for a small economy like Vanuatu.

The medium term prospects of Vanuatu’s economy look promising.  As discussed, the macroeconomic fundamentals remain strong and this is a good foundation for growth in the future. However, the fiscal front still remains a major risk and the Government’s recent plans to return to fiscal balance/surplus in the medium term are welcomed. Also the Government’s plan to continue with major structural and institutional reforms as highlighted in its recent National Trade Policy Framework is a positive step to ensure that the economy continues to grow at a sustainable level and remain competitive. Coupled with these reforms, a commitment to good governance is also vital to secure long term economic growth that could in turns translate into better development outcomes.

Odo Tevi is Governor of the Reserve Bank of Vanuatu. This post is a summary of his presentation (powerpoint available here) to the 2012 Pacific Update.  The rest of the series can be found here.