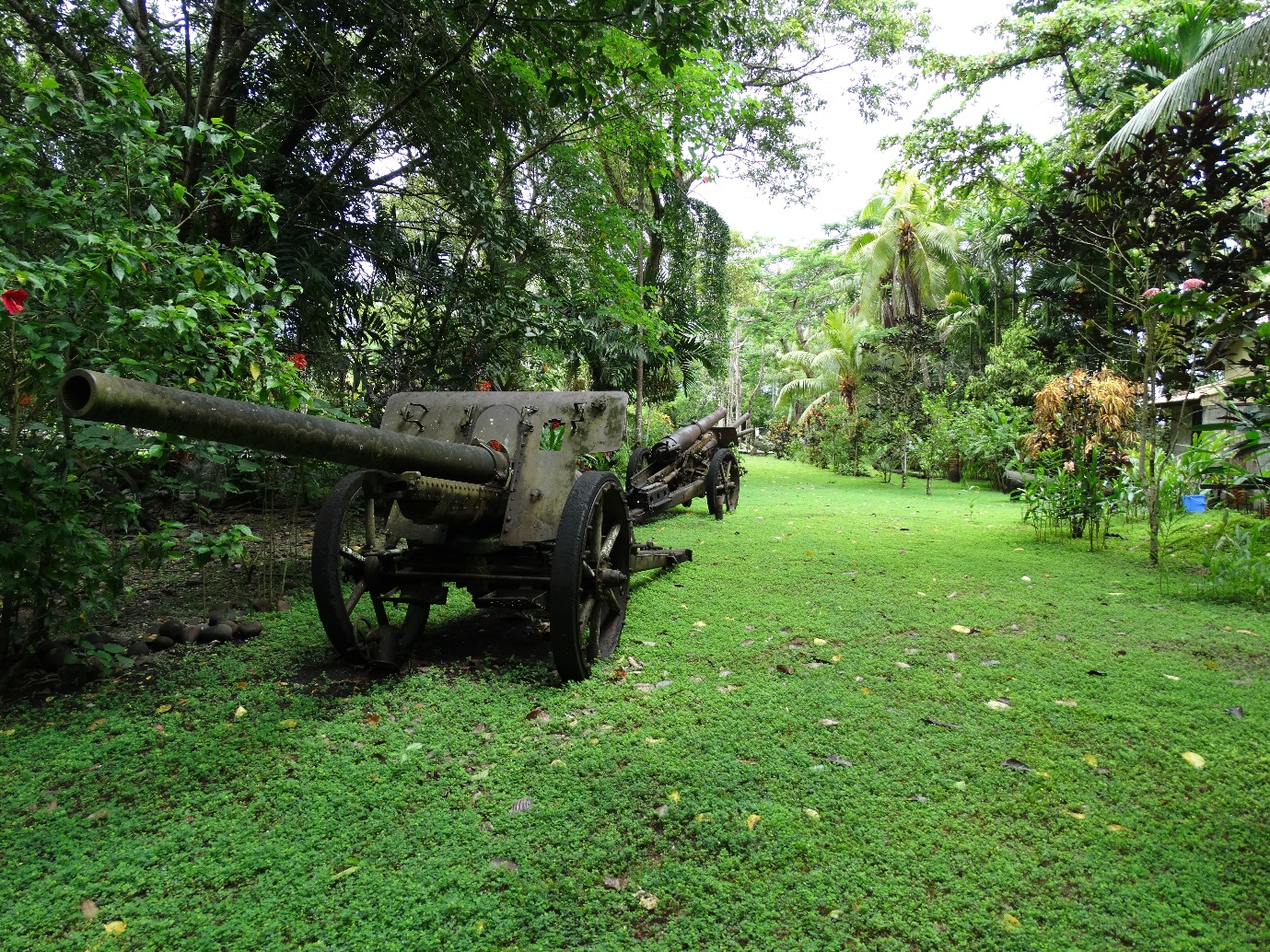 Tourism in Solomon Islands is in its infancy. The number of ‘genuine tourists’ to the country is extremely low, with probably only 6,000 visitors each year. There is nevertheless considerable optimism for the sector, which is considered to have strong growth prospects. ‘Niche tourism’ associated with activities such as diving and hiking is seen as a potential source of revenue in a country where the forest and mining industries – the traditional earners of foreign exchange – are in their last years of operation. Solomon Islands’ extensive, and still visible, World War Two history is also an attraction for international visitors.

The Vilu War Museum is hidden behind forest cover about one kilometre from West Guadalcanal Rd. It is less than an hour from Honiara by car, and the recently refurbished road is in good condition. Finding the museum is a challenge. There is no signage on the main road, and the muddy dirt track to the museum is overgrown with long grass.

I was fortunate to visit the museum with a friend who lives in Honiara, and who knew (vaguely) how to find it. We made a few wrong turns, and were twice pointed in the wrong direction, but eventually found our destination. (The challenge of finding the museum seems to extend to the internet: the Australian War Memorial describes the museum as being east of Honiara, when it is in fact west). 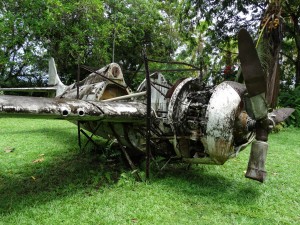 The museum itself is a remarkable assortment of Japanese, American, Australian and New Zealand war relics; remnants of the Guadalcanal campaign in which approximately 30,000 Japanese troops were killed. Aircraft, artillery pieces, and unexploded shells sit in varying condition outside on the beautiful lawns, alongside monuments for fallen Japanese, American, New Zealand, Australian, and Fijian soldiers. The aircraft include a Corsair, Japanese Betty bomber, Lockheed Lightning, and a Wildcat – the latter with still working foldaway wings.

The museum could be a major tourist attraction, and it is visited by World War Two veterans and enthusiasts. But there were no tourists there when we visited, and Anderson Dua (the museum’s owner) seemed very excited at our arrival.

The museum itself has an interesting history. The assortment of war memorabilia were originally collected in the 1960-70s from across Guadalcanal by Dua’s uncle, the late Fred Kona, who brought them to their current location (in some cases against the wishes of veterans who wanted them left in the jungle). Dua assisted his uncle to collect many of the artefacts as a child. He speaks with obvious passion and knowledge about every artefact, and delights in pointing out the best locations and angles for camera shots.

During the ‘Tensions’, the museum was effectively abandoned. Many of its pieces were stolen or vandalised. Dua has done his best to re-assemble pieces and expand the collection. But he laments the fact that the museum’s collection is not as extensive as it was in the 1990s.

Managing the museum has its challenges. Vandalism is an issue. When asked why he hadn’t put up a sign on the main road, Dua smiled. He has put up signs. Three times, in fact. Every sign has been torn down and stolen. So Dua has given up on signage, and relies instead on the odd drop-in visitor and some organised group visitations from Honiara. These are mainly Japanese, American, New Zealand and Australian World War Two enthusiasts. On the wall at the entrance even sits a photo of Dua with Fijian PM Bainimarama, who in 2013 visited the museum’s monument to the 50 Fijian servicemen killed in the Guadalcanal campaign.

But Dua does have plans for the museum. When hearing that one of us was from the New Zealand High Commission, he enquired about how he could get funds for a chainsaw. Some of the trees that sit around the war artefacts need to be cut. Money is also needed for a fence to keep vandals out. Several of the monuments have been damaged by thieves trying to steal materials. Dua cannot afford these investments without assistance: there are simply not enough visitors to the museum, and credit from the bank is not an option without collateral.

The challenges to managing the museum are therefore similar to those faced by other private sector enterprises in rural Solomon Islands. Limits to law enforcement in rural areas result in theft and vandalism. The lack of access to credit (and absence of collateral) hinders investment in the museum. There is also very little support from the government – national or provincial – and next to no promotion by the Solomon Islands Visitors Bureau.

One positive development is the recent rehabilitation of West Guadalcanal road, which was funded by Solomon Islands Government, Asian Development Bank (ADB), Australia and New Zealand. Visitors can now drive to the museum in less than an hour from Honiara, on a sealed road, and in a two-wheel drive vehicle. That’s assuming they can find it, of course.