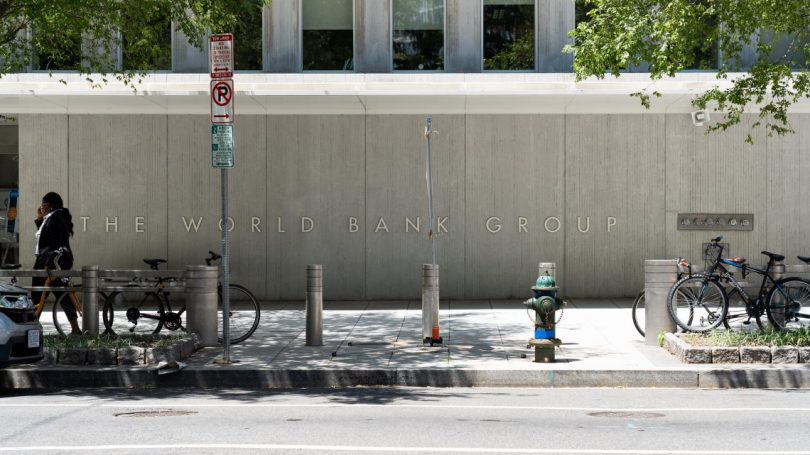 As one of the World Bank’s five development financing agencies, the International Development Association (IDA) focuses on the world’s poorest countries by providing them with grants or highly concessional loans to help them meet their development needs. IDA supports a broad range of development activities across various sectors and relies on replenishment cycles to raise funds to finance its development programs.

The latest round of fundraising – IDA19, which actually concluded in December 2019, but has gone unnoticed in Australia – delivered a record-breaking US$82 billion in total. While the total amount of funds raised by the IDA has increased in nominal terms over the last five replenishment cycles, the proportion of contributions from donor countries has fallen each cycle, as Figure 1 illustrates. 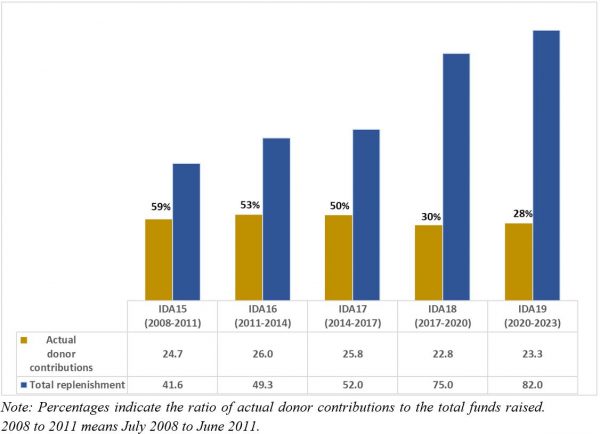 How can IDA be growing, when donor countries are becoming no more generous? The growth in total funds raised is due to greater support from the World Bank Group itself, via IDA reflows (amounts paid back from recipients of earlier IDA loans), International Bank for Reconstruction and Development profits, and, since IDA18, market borrowings.

With Australia’s shrinking aid budget, it is not surprising that Australia’s IDA contributions have declined in recent replenishment cycles – both in absolute and relative terms. Since IDA17, seven countries – Austria, Belgium, China, Denmark, Norway, Saudi Arabia and South Korea – have surpassed Australia in their generosity to IDA, and Australia has dropped from the 11th in IDA17 to 12th in IDA18 to the 18th most important donor in IDA19. Notably, China’s nominal contributions have quadrupled from US$300 million in IDA17 to US$1.2 billion in IDA19.

Figure 2: Countries that have contributed more to IDA than Australia 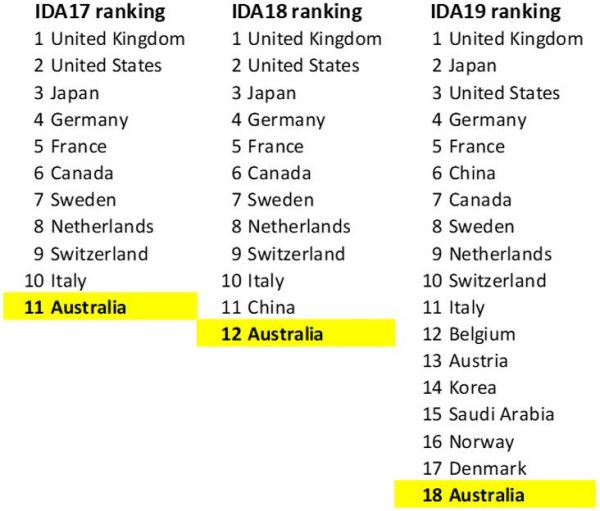 Australia’s falling ranking is consistent with our declining burden share, from 1.8% in IDA16 and IDA17 to 1.55% in IDA18 and 1.07% in IDA19. Although, due to IDA’s arcane accounting (explained in the endnotes), burden shares combined do not necessarily add to one, their total is largely unchanged over the last three rounds. We have reduced our share of total country IDA funding by 42%: from 2.5% of the total in IDA17 to 1.5% in IDA18. 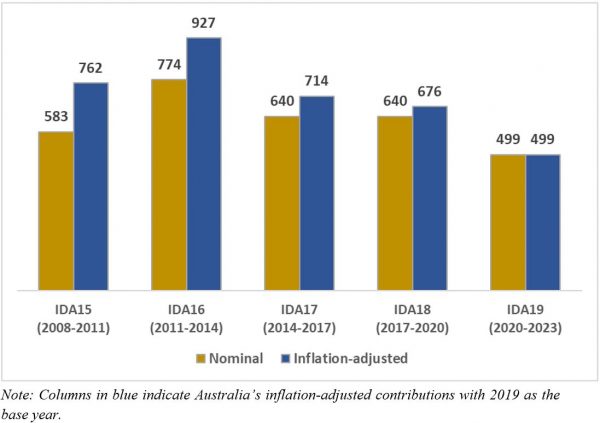 Cutbacks in programs across Asia and the rest of the world are an inevitable consequence of Australia’s Pacific pivot and a declining aid budget. Multilateral funding has overall been kept high, but with ongoing aid cuts, and increases to more popular global institutions, Global Fund and Gavi, something had to give. Australia can talk about the importance of the multilateral system, but if we start defunding it, and becoming a less important donor, it will remain just talk. In 2014, the Coalition boasted that it was maintaining Australia’s IDA burden share. Why does it now make sense to cut that share almost by half?

Even from a narrowly Pacific perspective, this cut seems short-sighted. Australia has negotiated over the years for an increasing proportion of IDA to flow to the Pacific. All Pacific countries have an income (GNI) per capita far above the IDA threshold of US$1,185 currently. But, due to a small-island carve out, a large number are nevertheless eligible for IDA, including relatively prosperous ones such as Fiji. (The full list of Pacific countries eligible for IDA on account of this special exemption are: Fiji, Kiribati, Marshall Islands, Micronesia, Papua New Guinea, Samoa, Solomon Islands, Timor-Leste, Tonga, Tuvalu, and Vanuatu.) Not only are these countries all eligible, but IDA guarantees them at least US$21 million a year, up from only US$5.5 million before 2017. Other countries have to compete for IDA funding on the basis of their poverty, size and performance. Having secured such a good outcome for the Pacific, does it make sense for Australia to reduce its funding of and therefore influence within IDA?

Correction, 8/2/2022: The phrase ‘(the blue columns)’ was deleted from the paragraph below Figure 1 in this blog as it did not correctly describe the graph.