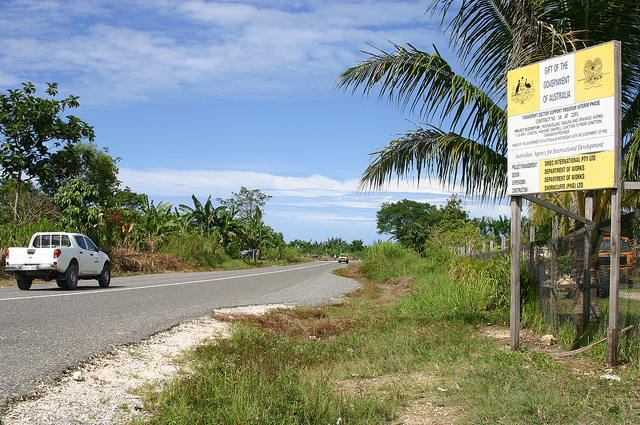 Two and a half years on, what has happened? Has the aid program become more transparent under the Coalition? There has been some progress over the last couple of years after an initial sharp reversal. The Blue Book [pdf] has come back (recoloured as orange), and this provides some useful consolidated data. But I’ve always thought that what really matters for transparency is concrete, unvarnished information about specific activities and relationships. And while the new integrated aid website has been populated with some documents, overall transparency does not seem to have improved.

Here is an illustration, which I have selected because it concerns our biggest aid project to our biggest aid recipient, the PNG Transport Sector Support Program, worth about $400 million between 2014 to 2019. Go to the DFAT website and look up transport aid to PNG and you will find this: 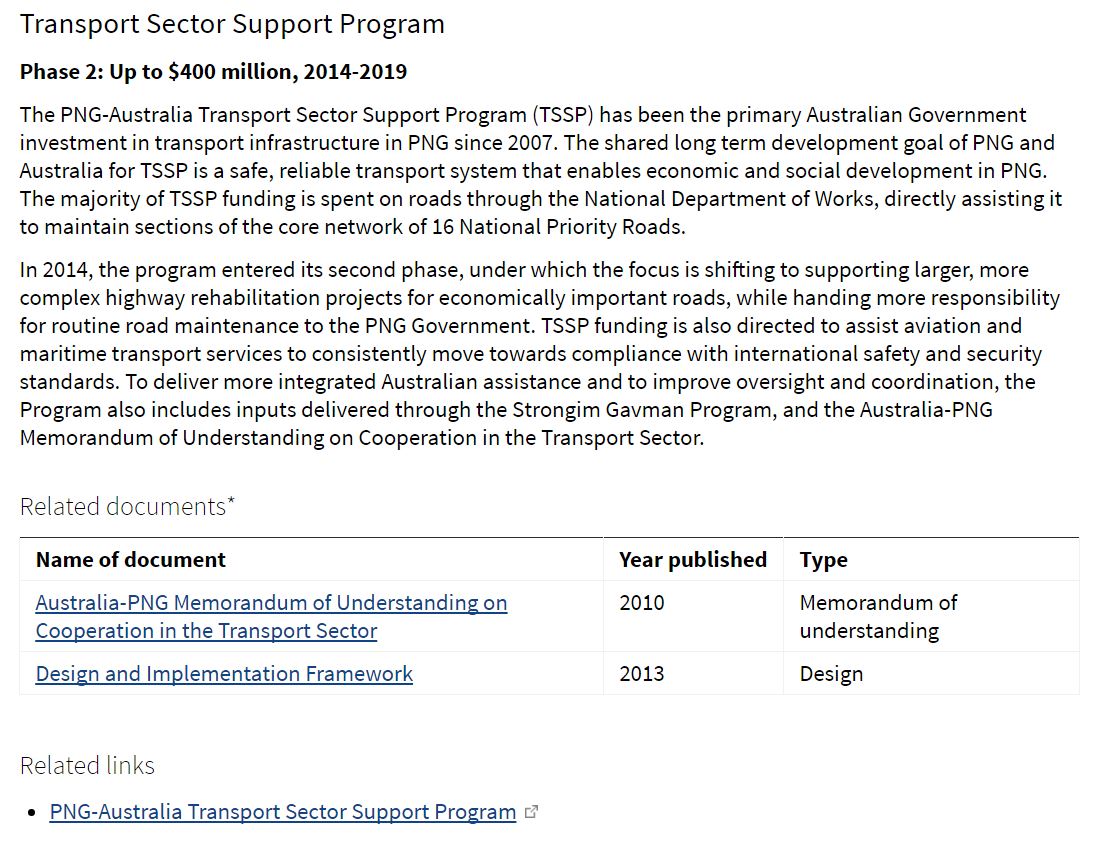 Note the links to two documents. One is a 2010 MOU, of unclear current relevance, between the two countries’ transport departments. The other document is from January 2013, and provides the design (though not the budget) for the above-mentioned $400 million project. And then there is a link to the website for the same project, which is glossy, but light on documents. As far as I can tell, it has no project reports either.

So, a $400 million project, with one design document, three and a half years old, and a few announcements.

We can compare this to the situation prior to the Coalition coming to office for the same project by using the very useful web.archive.org tool. I went back to its 15 August 2013 snapshot of the web as a record of what things were like just before the Coalition came to power. Here it is for PNG transport: 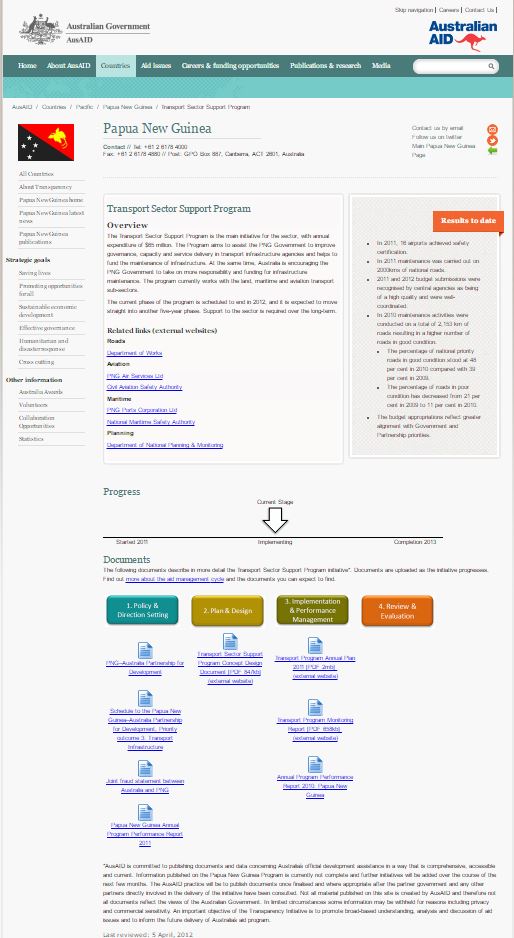 So, document availability was not crash hot under Labor, but better in this case than under the Coalition. For completeness — at least for this case — I should mention that useful remarks about many projects can be found in the annual country portfolio reviews. According to the latest PNG annual review, the PNG transport project is going very well. Such synthetic, summary information is important, but no substitute for project-level data.

Admittedly, this is only one example, though it is an important one: the biggest project for our biggest aid recipient. We did a transparency audit in 2013, and found pretty mediocre performance by Labor relative to its own Transparency Charter. We found that while two-thirds of projects had a design document on the web, only just over one-third had a project report. And on average, project reports and reviews were two years old. We haven’t yet done a transparency audit for the Coalition. Some other PNG projects are better documented, especially in the area of governance, though there is no mention there of the new mega Governance Facility, which is about to take over from transport as the biggest PNG project, even though the tender has already been awarded. The most recent PNG health monitoring or evaluation report is from 2013, and there are no education reports, only three plans from 2010 and 2011. Perhaps other countries provide better documentation, but I noticed, for example, that the Indonesia website has only one monitoring or evaluation report dated 2015 and none from this year.

If there have been improvements, they have been patchy, leaving major holes of missing or out-of-date information still to be filled in. One positive is that perhaps more evaluation documents are now published, including through this useful list (though strangely I couldn’t find an evaluation of the first PNG transport project, despite the fact that the second is now well underway).

In the meantime, other countries have moved streets ahead in terms of transparency. If we want to be “as open as possible” we need to look not only at the historical record but at other countries, as it is international performance that sets the benchmark. Take DFID, and their largest aid recipient, Pakistan. DFID’s biggest project to Pakistan is in Punjab for education. The Punjab education project page is shown below: 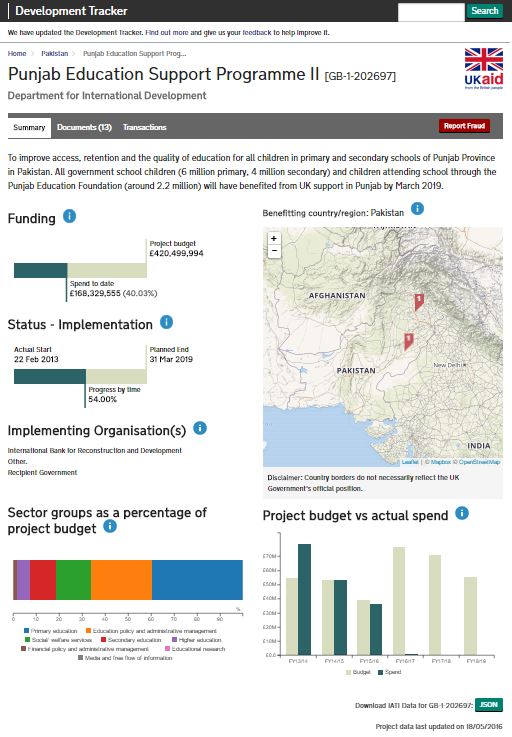 It has 13 documents attached to it, the most recent a February 2016 review. Moreover, and unlike their Australian counterparts, the DFID project pages provide clear information on how much has been spent on the project, both in the current year and in earlier years. The DFID Development Tracker is an IATI (International Aid Transparency Initiative) portal, and draws both the annual information expenditure and the various documents from the project information that DFID publishes to IATI. Australia reports the same budgetary information to IATI (not documents apparently), but has not developed a user-friendly portal. In theory, as Robin Davies explained, you can use a generic portal to search for this Australian spending data, but it’s far from easy, and, since the government is not making the data easily available to the public, hard to know how reliable it is. (Robin points to some major problems with the Australian IATI data he unearthed: Myanmar programs classified under Indonesia, for example.)

So, here we are, three years on, with still a poor performance on aid transparency, in a context in which other donors are moving ahead rapidly.

Let’s hope that if the Coalition is returned, Julie Bishop makes transparency a second-term priority, for example, by making performance in this area one of the aid program’s performance benchmarks. And that, if Labor win office, Tanya Plibersek follows through on the emphasis she has given in her recent remarks to effectiveness and accountability. Australia might have become a below-average donor in terms of generosity, but we should still aspire to be not only above average, but best practice when it comes to effectiveness. Transparency is an important part of that, it’s an area in which it is not hard to do well, and we have lost time to make up for.