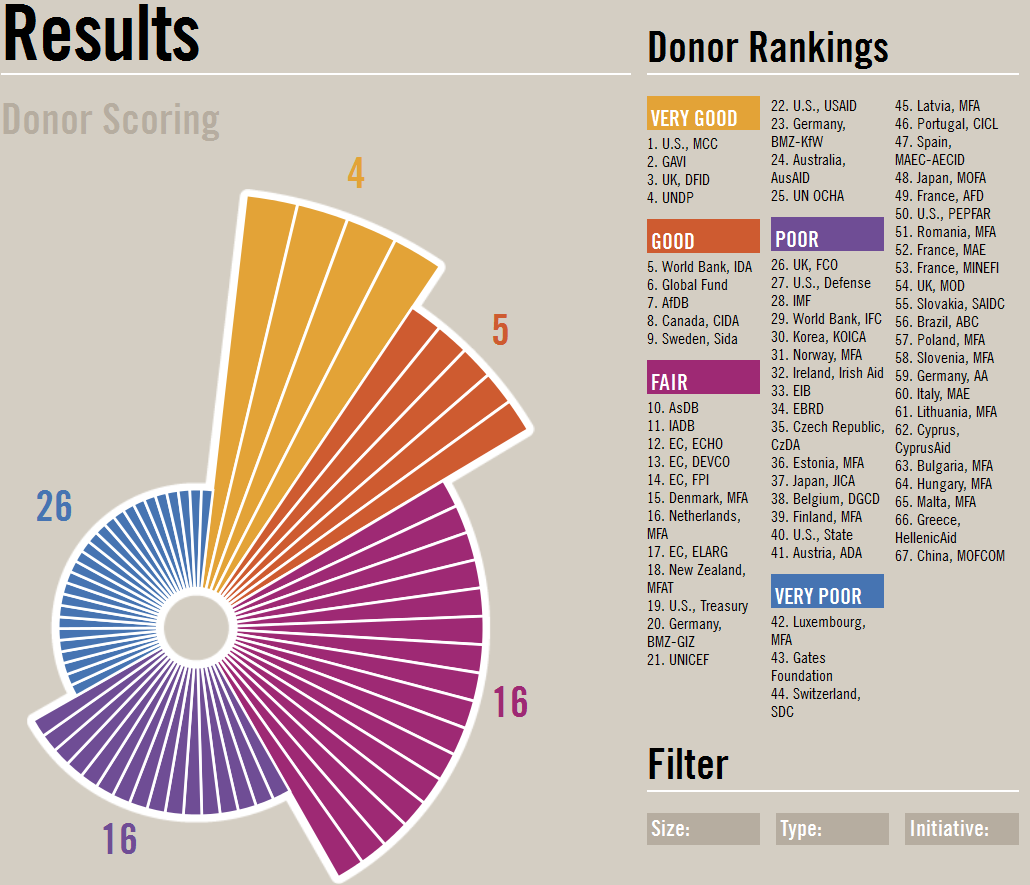 Transparency is a vitally important pillar of development – a necessary condition that facilitates effectiveness, accountability and social change (see Owen Barder’s terrific justification of transparency here). For aid to be transparent it needs to be shared openly in a timely, comprehensive, comparable and accessible way. Donors have two ways of promoting transparency, first by releasing more documentation on their own website, and second by publishing more aid information to the International Aid Transparency Initiative (IATI), the global standard for publishing aid information that satisfies the aforementioned conditions.

So how are donors faring in the new world of transparent aid?

The 2013 Aid Transparency Index (ATI), recently released by Publish What You Fund (and previously blogged about here), measures transparency using 39 indicators across three levels: commitment to aid transparency, publication at the organisational level and publication at the activity level. The index is now in its third year of operation and this year has reviewed 67 organisations made up of a combination of bilateral and multilateral agencies, vertical funds, humanitarian agencies and private foundations.

The index’s methodology has also been considerably revised this year to measure for the first time not only the quantity but also the quality of information published by donors. The Index now awards more points to agencies publishing information in formats that are standardised, comparable and easily manipulated (i.e. IATI or excel as opposed to PDF). This change in the way the Index works is basically saying that it isn’t enough to dump documents online; they also need to be consistent, timely, useful and reusable.

The results of this new system of measurement are polarising. Only nine donors score above 60%, while 26 score below 20% and an average donor scoring 32.6%. This huge discrepancy between donors reveals the lengths some agencies have gone to in mainstreaming and institutionalising transparency, and the lengths others will need to go to in order to catch up. 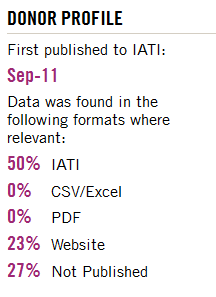 How does Australia perform in the refurbished index? The answer is fair, but barely. AusAID received an overall score of 43%, placing it 24th on the index, just above the 40% ‘fair’ cut-off. This revised ranking comes as a blow to AusAID, which witnessed a near doubling of its score between the 2011 and 2012 indexes (using the old, quantity based methodology) to reach 18th position in 2012, placing it at the top end of the ‘fair’ ranking bracket. Under the new ranking system Australia has now fallen below the US, Canada, and Germany. AusAID is now rated as the 9th most transparent bilateral aid agency.

The major reasons for Australia’s relatively low and falling score are:

You can see AusAID’s individual performance against each indicator in the image below.

The index provides three recommendations to improve transparency. First, Australia should increase the publication of aid information to the IATI registry, especially at the project level. Second, it should take a whole of government approach to publishing information on aid spending. Third, it should produce an Open Government Partnership (OGP) national action plan to further transparency commitments..

In June 2012 at a speech at the ANU, now Foreign Minister Julie Bishop called for “an increased focus on accountability, transparency and a reassessment of priorities within the Australian aid program.” The recent announcements surrounding the future of the Australian aid program suggest that a reassessment of priorities is in full swing, but will accountability and transparency follow? It is too soon to tell, but one worrying sign is that AusAID’s Transparency Charter, launched in 2011 by then Foreign Minister Kevin Rudd, no longer enjoys the profile it once had on the AusAID website. The Charter can still be found [pdf] if you search for it, but transparency has been dropped as one of AusAID’s highlighted aid issues. It’s a worrying sign.

Improving the transparency ranking of Australia’s aid should be an early priority for a new Government eager to make its mark on both reassessing and improving the effectiveness of Australian aid.

Jonathan Pryke is a Research Officer at the Development Policy Centre. Wilma Gillies is an intern at the Centre.

Wilma Gillies is an intern at the Development Policy Centre.