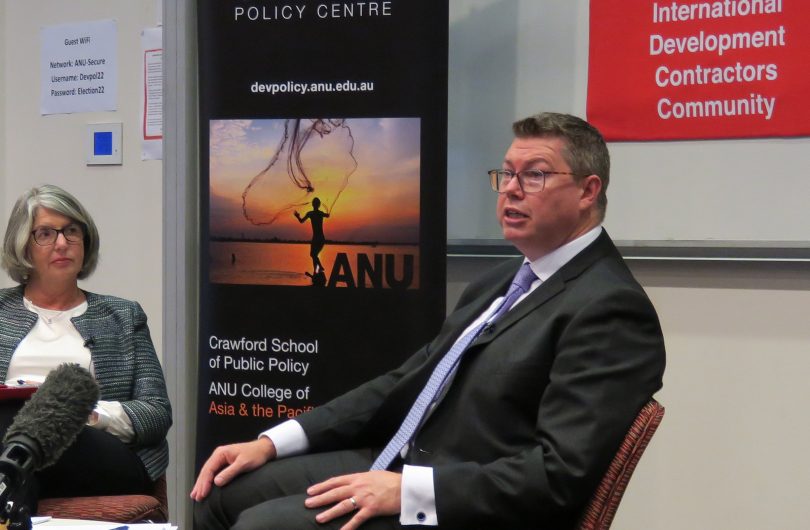 Minister for International Development and the Pacific, Pat Conroy speaking at ANU on 9 May 2022 (Devpol)

As well as increased aid to the Pacific and Southeast Asia, among Labor’s pledges during the federal election campaign was its promise to conduct a DFAT-led review “to examine new forms of development finance and develop policy options for consideration in government”.

Discussion about whether and how Australia should diversify its sources of development finance – and, in particular, whether it should establish a dedicated development finance institution (DFI) – has featured on this platform for almost a decade. Indeed, one of the earliest proposals for an Australian DFI came from Bob McMullan, a Labor predecessor of the new development minister, Pat Conroy. The NGO sector is also on board with the idea, publishing a useful policy brief ahead of the election.

The former Coalition government went some way towards setting up several DFI-like structures, with the establishment of the Australian Infrastructure Financing Facility for the Pacific in 2018, the commencement of a new blended finance fund in 2020, and the 2021 decision to allow Export Finance Australia to take direct equity stakes in overseas projects. But Australia remains one of the few Western donors not to have established a formal DFI. Such an entity, properly designed, could be an effective mechanism for progressing the new government’s ambitions in areas such as regional climate finance.

So where should the review begin?

A useful first step would be to release the recent review conducted by John Eyers, a former senior Treasury official. According to evidence provided by DFAT to the Senate in 2019, this review “explored whether expanding the range of financing options available to the aid program (including loans, equity, guarantees and insurance) would help deliver on the Foreign Policy White Paper objectives across the Indo-Pacific”. This sounds like a reasonably comprehensive exercise, it means the new government doesn’t have to start from scratch, and it would be good to know what it found.

The review should also look to international lessons, including the recent experiences of two of Australia’s most comparable donor peers – the UK and Canada.

Until recently, the UK’s principal bilateral mechanism for encouraging private sector investment in low- and middle-income developing countries was the 70-year-old CDC Group (formerly Commonwealth Development Corporation). In 2022, the Johnson government rebranded the CDC Group as British International Investment (BII) with the (somewhat lofty) goal of “grow[ing] economies across Asia, Africa and the Caribbean while drawing them closer towards free-market democracies and building a network of liberty across the world”.

Canada is a more recent addition to the DFI club, announcing its Development Finance Initiative in 2015 before moving to establish FinDev Canada in 2018. This followed a parliamentary committee report into Canada’s approach to development finance – Focused, independent, and patient: building a world-class Canadian development finance institution.

The experience of both countries suggests that standing up new development finance entities is not without its complexities, and that there are several threshold questions with which the review will need to grapple.

The first question concerns the issue of multiple objectives; specifically, how would an Australian DFI manage the balance between securing attractive commercial returns (viability) and ensuring long-term development impact (effectiveness)? In the UK, NGOs have criticised the establishment of the BII, charging that it will further dilute a focus on poverty reduction. This criticism, however, overlooks the division of labour between ODA and other forms of development finance – that is, “to help the poorest and most marginalised, the ideal policy mix would be some combination of measures targeted at them directly [through traditional aid] and those aimed at accelerating economic transformation and the growth of the formal sector [through blended finance and DFIs]”. Canada’s parliament recommended that, while the core objective of its DFI should be “catalysing private investment for international development”, FinDev’s mandate should also “clearly state the institution’s objective of balancing development goals with financial returns”.

But the question of how to manage trade-offs within this broad division of labour remains. For instance, a geographic focus on investments in low-income countries in sub-Saharan Africa and South Asia (an unlikely focus for Australia) might generate greater development impact but lower financial returns, while a focus on middle-income Southeast Asia (a likely focus for Australia) may produce the opposite.

And in smaller Pacific island countries, where genuine private sector investment opportunities are scarce, investments may still need to be supplemented with grant-based technical assistance to generate either. This suggests that explicit criteria for assessing possible trade-offs between investment viability and effectiveness (e.g. through discounting for income levels) and dedicated technical assistance support needs to be built into the model from the outset.

A second, related issue concerns the governance arrangements that would apply to an Australian DFI; namely, the balance between independence and oversight. Best practice would entail an independent entity, subject to legislated accountability and transparency requirements through parliament, with a clear mandate and governed by a board with the necessary financial and development expertise. This would be the way to go if Australia – keen to differentiate itself from China’s approach to development finance – is genuine about market-driven mechanisms that take environmental, social and governance standards seriously.

Broadly speaking, this is the approach that the UK has pursued, with BII established as a stand-alone entity under the existing CDC Act and with an independent board. Despite the committee’s call for a high degree of independence, the Canadian government opted to maintain FinDev as a subsidiary entity of Export Finance Canada (EFC), with “day-to-day operations and transaction decisions the responsibility of its Board and executives”. The CEO of EFC chairs FinDev’s board. As argued elsewhere, this model runs the risk of blurring export promotion and development objectives. And it would make it harder to differentiate ourselves from China.

A third issue surrounds the financial and developmental ‘additionality’ of DFI funding – that is, ensuring that it doesn’t crowd out private investment that would have occurred otherwise and can also demonstrate genuinely supplementary development impacts. This was a deficiency highlighted in a 2016 audit of BII’s predecessor, the CDC, which found that, while achieving its investment return targets, “it remains a significant challenge for CDC to demonstrate its ultimate objective of creating and making a lasting difference to people’s lives in some of the world’s poorest places”. More recent evaluations of CDC’s financial institutions and infrastructure portfolios have made similar findings.

In an effort to address these concerns, BII has adopted a new performance and impact framework (based around portfolio “impact scores”) centred around three strategic objectives: productivity, sustainability, and inclusivity. Canada’s FinDev has produced a detailed development impact framework against which to assess investment performance, including through independent verification.

These questions around multiple objectives, robust governance and demonstrating impact are just a few of the issues that the development finance review will need to canvass if it recommends that Australia establish a DFI. Another, separate challenge will be ensuring that any new entity has the requisite capabilities and skills to manage complex financing proposals, returns and risks.

Indeed, the biggest challenge will not be a lack of lessons and guidance, but ensuring that the review team has the time, resources and access to expertise (both internal and external) required to assemble Australian and international experience into a coherent set of policy options and advice for the new government.