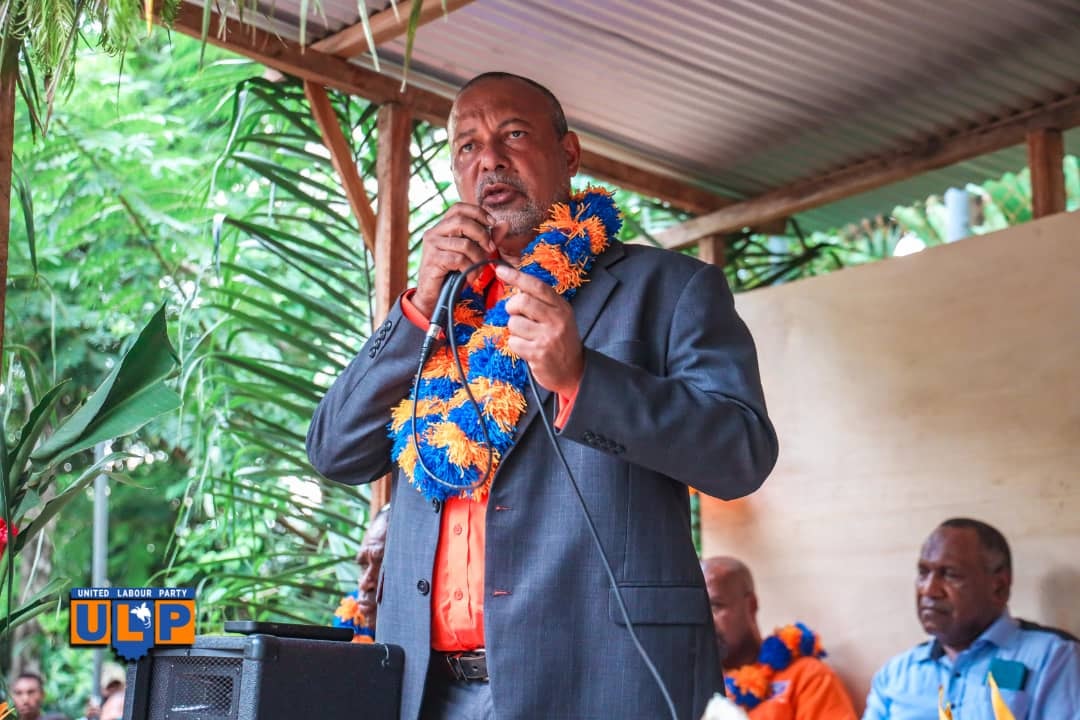 Sam Basil in March this year

Bikpla kumul i pundaun: the political life of Sam Basil

On the night of 11 May 2022, one day before the issue of writs for PNG’s election, Deputy Prime Minister Sam Basil, and his Close Protection Officer First Constable Neil Maino, died in a car accident along the Bulolo Highway. Many tributes have already been given. Here I will focus on the political life of Sam Basil, his achievements and controversies.

Basil first contested the Wau-Bulolo Open electorate in 2002 as a candidate for the People’s Progress Party (PPP) led by Sir Julius Chan. He lost, but in 2007 he contested again and won. He remained with PPP until January 2011, when he switched to the PNG Party led by Belden Namah, and was appointed Deputy Opposition Leader.

When Michael Somare was removed as prime minister in August 2011, Basil served as Minister for National Planning in the new Peter O’Neill-led government for a year, before parliament was dissolved for the 2012 election. He was re-elected in 2012 as a PNG Party candidate, but the party broke ranks with O’Neill, and remained in the opposition when O’Neill formed the government. Basil was appointed Deputy Opposition Leader as well as Shadow Minister for National Planning, District Development and Health and HIV/AIDS.

In 2014, Basil left the PNG Party to become the leader of PANGU (Papua and Niugini Union Pati), one of PNG’s first parties but one that had dwindled over time, and that had been absent from parliament since the 2013 death of Ludwig Schulze, its sole member to be re-elected in 2012. Basil continued as deputy after Don Polye ousted Namah as opposition leader in December 2014. In August 2015, he was joined by a second PANGU MP when their endorsed candidate, William Samb (also sadly recently deceased), won a by-election for Goilala Open.

Under Basil’s leadership, PANGU won a remarkable eight out of the ten seats in Morobe Province in the mid-2017 election. Three other seats were also won by PANGU candidates: Sohe Open in Oro Province, and Madang Open and Goilala Open in Central Province. Sir Mekere Morauta and four other independent MPs then joined PANGU following the election, bringing the total number of PANGU MPs to 16. PANGU was now back in a big way.

In August 2017, after failing to form a government that would displace O’Neill, and despite running on an anti-O’Neill platform, Basil announced his party’s move to the O’Neill-led government coalition. Twelve PANGU MPs followed him, but other PANGU MPs such as Bryan Kramer and Morauta protested this move and remained in the opposition.

Between 2017 and his passing in 2022, Basil held various ministries in the frequent ministerial reshuffles. When he first joined the O’Neill-Abel government in August 2017, he was given the Ministry for Communications, Information Technology and Energy, a position he held to April 2019. When James Marape resigned from the O’Neill government in May 2019, Basil was appointed as Minister for Finance, the position that had been held by Marape.

Basil supported Marape’s election as prime minister in late May 2019, and he maintained the Ministry for Finance temporarily. He was very briefly Minister for National Planning and Monitoring, but then was moved to the Treasury in a further reshuffle, where he remained from June to August 2019. He was re-appointed as Minister for National Planning and Monitoring in August, and as Deputy Prime Minister in October 2020.

Basil was ambitious, and no doubt wanted to be prime minister himself. He deserted Marape in the November 2020 attempted vote of no confidence but, when that was unsuccessful, returned to the government in December and was re-appointed as Deputy Prime Minister, and given the Ministry for Commerce and Industry.

Basil also moved from party to party. After a prolonged dispute with the non-parliamentary wing of PANGU over his switch to the government, in May 2019 he broke away from PANGU, revived the Melanesian Alliance (another party lacking MPs), and became its leader. He took seven PANGU MPs with him. Then in late 2019, with the backing of the PNG Trade Union Congress, he formed the United Labour Party (ULP). In its first fundraising dinner in March 2020 Basil said that, “after a long and tough search for a home”, he and eight other MPs, three of them government ministers, had formed ULP.

Basil’s achievements in politics should be measured against the dual roles of ‘service deliverers’ and lawmakers that PNG MPs hold. On the service delivery front, Basil was among a few MPs who put their constituency development funds to reasonably good use. Among other things, Basil’s electrification program in rural Bulolo district was lauded as a role model by PNG Power Ltd. In a country where only 13% of the population is connected to the main power grids, Basil was successful in bringing electricity to most of the district.

At the national level, Basil is best known for pushing for the establishment of the anti-corruption agency Task Force Sweep (TFS). Though O’Neill is often credited for creating the TFS, according to Sam Koim, its leader, it was Sam Basil’s idea. After realising the magnitude of corruption within the national planning department when he took over the ministry following the change of government in 2011, Basil pushed for an inter-agency body to investigate, arrest, and recoup state funds. TFS’s successes included conviction of Paul Tiensten, a sitting MP and former planning minister. TFS was disbanded in 2014 but it remains the only anti-corruption agency to have made any substantial progress in curbing corruption in PNG.

After cultivating a profile of a principled and non-compromising anti-corruption fighter for a decade, Basil’s switch to the O’Neill-led government in 2017 disappointed many. For the 10 years (2007-17) that Basil was in the opposition, he was a constant critic of the Somare government (2007-11) and O’Neill government (2012-17). Leading into the 2017 election, Basil embodied nationwide anti-O’Neill and anti-PNC (People’s National Congress Party) sentiments. All the incumbent MPs who lost their seats in Morobe in 2017 were either O’Neill’s PNC MPs or those who were supportive of O’Neill in the 2012-17 term.

His reason for switching sides to the O’Neill-led coalition? He said he did not want his new PANGU MPs to be deprived of their constituency funds (District and Provincial Services Improvement Program funds). But Basil had done well from being in opposition for a decade, so the reason surely had more to do with his own ambitions. Of course, switching parties and allegiances is a permanent feature of PNG politics, but many had hoped Basil would show a different way forward.

When made Minister of Commerce in early 2021, Basil increased PNG’s stock market transactions fee to a punitive 0.75%, a move that dented his credibility and reputation for being pro-development. Later in the year, after he had moved on, the fee was drastically cut to 0.03%, and refunds were offered on the higher levy.

Basil’s popularity in PNG, and especially in his home province, was immense. The people of Morobe, PNG’s most populous province, looked to Basil as a future – and PNG’s first Morobean – prime minister. The outpouring of grief and sympathy expressed in the week following his death is second only to that following the death of one of the founding fathers and the first prime minister of PNG, Michael Somare. Whatever his flaws and strengths – and he had both – Basil’s place in PNG political history is secure.

Note: The first part of the title of this blog can be translated as “The big bird of paradise has fallen”.