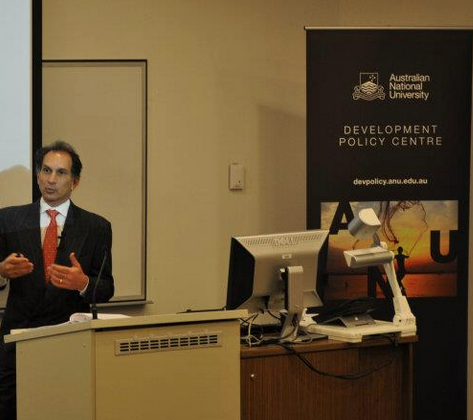 In a new paper from the Overseas Development Institute, Homi Kharas and Andrew Rogerson aim to “stimulate debate on the future of the international development architecture.” The authors envision a changing world where volatility will become the norm and huge amounts of poverty will converge towards low-income, predominantly African, fragile states.

The authors highlight three major ‘disruptors’ that will determine the shape of the 2025 aid horizon: the emergence of private philanthropy, the emergence of new donors and the dynamics of South-South cooperation; and finally climate change finance. The authors have provided vulnerability analysis of donor agencies exposure to the future they envision: the higher the score, the more vulnerable to these changes. 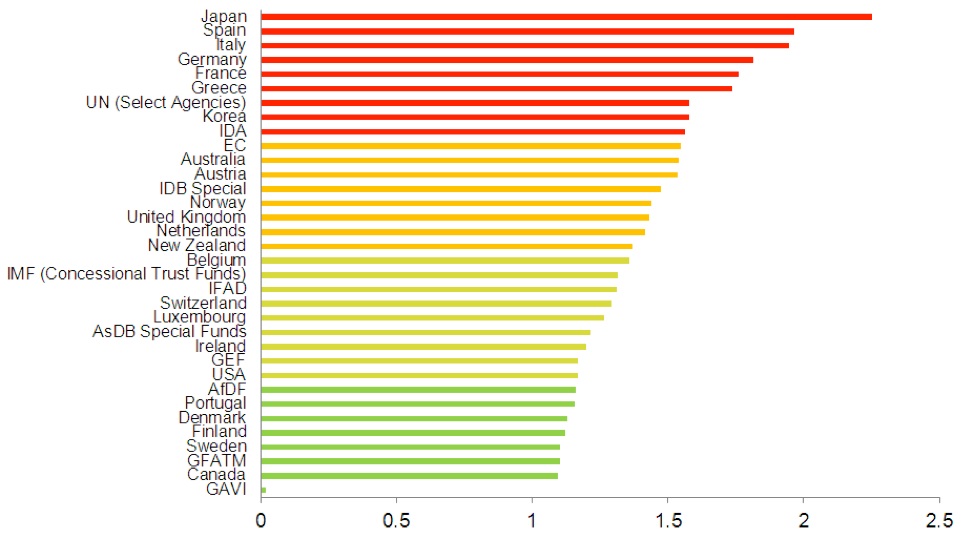 Homi Kharas was in Australia recently and gave a talk on these issues for Devpolicy at the ANU. A video of his presentation is available here.

Family planning back on the development agenda

In a summit held in London this month rich countries have pledged $2.6 billion over the next eight years to family planning. Former World Bank demographer John May, writing for the CGD, provides some good background here. Julia Newton-Howes also provides some important background information in this blog and the Gates Foundation dismisses a lot of the controversy surrounding family planning in this infographic and video:

For the implications for the Pacific, see this post.

Many major donors have pledged to give Afghanistan $16 billion in development aid through 2015 at a conference in Japan last month in an effort to shore up the fragile nation as foreign troops leave. The US is promising at least $2 billion a year until 2017, Japan $3 billion total to 2016, and Germany half a billion a year till 2016.  Australia has committed to increasing aid to $250 million a year by 2015 to make it the fourth biggest donor. Aid to Afghanistan between 2001 and 2010 has already reached over $60 billion, to mixed results. The CGD provides a blog on why less money might be a good thing for Afghanistan.

The World Bank is currently reviewing its operational procurement policies with the aim of ensuring that the Bank’s policies remain relevant in the changing landscape of global public procurement. This is the first comprehensive review of the Bank’s procurement policies since it’s founding. Interested Australian stakeholders are encouraged to share their views and recommendations here, or via email here.

The World Bank has debarred two wholly-owned subsidiaries of the Oxford University Press (OUP), its East Africa and Tanzania businesses, for a period of three years following misconduct in relation to two Bank-financed education projects in East Africa. The subsidiaries are alleged to have made improper payments to government officials for two contracts to supply textbooks in relation to two World Bank-financed projects. OUP has also agreed to make a payment of $500,000 to the World Bank as part of the negotiated resolution and a further £2 million to NGOs working on teacher training and other educational purposes in sub-Saharan Africa. A year ago the Bank debarred Macmillan Publishers for three years after the company admitted to trying to bribe World Bank employees to win book sales in Africa.

The IMF and World Bank have announced more than US$4 billion in debt relief for Côte d’Ivoire.

The World Bank hosts its second ‘international open government data’ conference this week. You can follow the liveblog and webcast here.

New World Bank President Jim Yong Kim provides this statement as he began his tenure July 1 where he prioritised maintaining progress against poverty and creating an ‘economic firewall’ for developing nations in the face of volatility.

Meanwhile, leaving World Bank President Robert Zoellick has announced his next step into policy think tanks, joining the Belfer Center for Science and International Affairs at Harvard University and the Peterson Institute for International Economics in Washington.

The World Bank has announced the winners of its “Apps for Climate” competition.

Oxfam has released a progress report on the food crisis in the horn of Africa.

The OECD-FAO has launched its Agricultural Outlook report 2012-2021, which expects global demand for food to rise sharply over the next ten years.

South Africa announced it had provided R268 million (around US$32 million) in ODA over the last financial year to 19 countries.