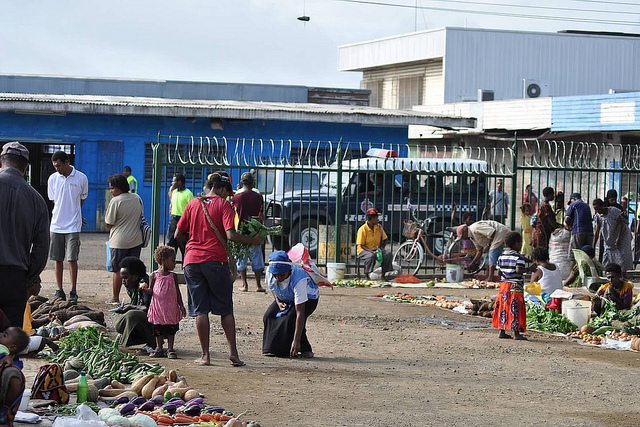 As the National General Election looms Papua New Guineans are contemplating what the future will hold for them. While important issues concerning employment, infrastructure, education and health will be a key feature for most political parties, equally important for most of the urban voting population will be the new government’s approach towards the country’s large and undeveloped informal economy. Apart from market and street vending, PNG’s informal economy includes informal settlement that is expanding rapidly due to high rental costs and limited availability of low cost housing in most urban centres of the country. In urban centres such as Port Moresby and Lae informal economy is central to the livelihoods of the majority of the population. According to PNG’s Urbanisation Policy[1], “more than 80 percent of the urban unemployed are found in unplanned settlements and villages. However, more than not, the unemployed are involved in some form of income generation as they participate in the activities of the informal economy (informal sector)”. This number is expected to increase into the near future as major cities and centres throughout the country experience further growth and expansion.

Driven by promises of transformational outcome as a result of the PNG LNG and large investments, many people rushed into big cities like Port Moresby and Lae in search of useful employment as well as other benefits. However, most of these people end up in the informal economy as employment opportunities become scarce. The situation becomes dire when urban development plans run counter to or do not include the interests of participants in the informal economy.

Fortunately the National government has taken huge strides in addressing the informal economy in a coherent manner with the introduction of the Informal Sector Development & Control Act 2004 and the National Informal Economy Policy 2011-2015. The creation of these two important documents was a landmark achievement for the PNG Government. In 2004 under the auspices of the former Minister for Community Development, Youth & Religion (Dame Carol Kidu) the Somare-led government passed the Informal Sector Development & Control Act. This was followed by the endorsement and launching of the National Informal Economy Policy in 2010.

Although in the initial years both the law and policy struggled to gained recognition and support from government, this is slowly changing due largely to the efforts of the Central Bank (BPNG) in promoting “financial inclusion” and the Department for Community Development & Religion in setting up the “Informal Economy Section” to coordinate the law and policy on the informal economy. Despite this progress the sector lacks “political voice”. The PNC led Government’s push to stimulate the SME Sector has failed to recognise the contribution of the informal economy although it aims to increase PNG-owned SMEs from an estimated 49,000 to 500,000 in 2030. With no clear pathway to graduate/transit into the SME sector, most informal economy micro-enterprises are languishing in the informal economy with very little government support. Subsequently, the government’s ambitious plan to increase the number of PNG-owned SMEs is in limbo. This is where political parties contesting this upcoming general election should consider supporting the “informal economy” as one of their key policy priorities. The sector alone accounts for almost 80-85% of both the rural and urban population. The informal economy will continue to grow as the rate of urbanization increases. Any political party aiming to form the next government should seriously consider the concerns of the informal economy participants who easily make up the largest voting blocks in most urban centres throughout the country.

There is no doubt that the sector is a “sleeping giant” and if given the right support – in terms of  government policies and laws as well as provision of credit and “political voice” – it can contribute significantly towards addressing some of the country’s development challenges such as rising unemployment and poverty.

Busa Jeremiah Wenogo is an economist who works with PNG’s Consultative Implementation & Monitoring Council as a Senior Project Officer specializing in informal economy.