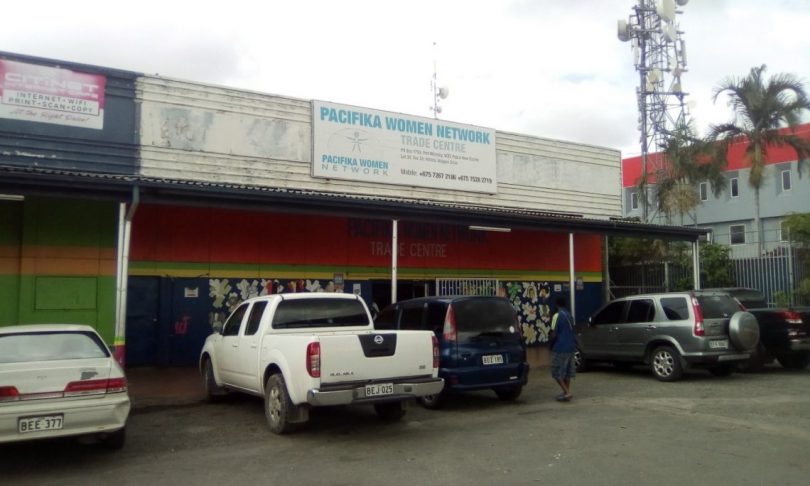 The Pacifika Women Network Trade Centre reopened in May after closing its operations for eight weeks due to the COVID-19 lockdown (Photo credit: Jotam Sinopane)

The PNG government has announced K600 million in additional spending in response to COVID-19. It has also raised K1.8 billion in treasury bonds and has received US$363.6 million (or K1.3 billion) from the International Monetary Fund as a concessional loan. It looks like it might have room, despite a K2.2 billion revenue shortfall, to actually finance that K600 million in additional spending.

The PNG Treasurer announced a breakdown of the K600 million on 11 May. From the K600 million, 47% or K280 million is allocated to health and security, and 53% or K320 million to “agriculture, households and business”. My focus is on the latter amount. The government has divided it up as follows:

Around half or K158.5 million (K113 million plus K45.5 million) is earmarked for districts and provincial governments to promote agriculture development and support rural MSME activities. Each district and provincial government will receive K1.0 million from the K113 million while each district will receive an additional K0.5 million each from the K45.5 million. Agriculture supports the livelihood of around 80% of PNG’s population, and the significant allocation to support agriculture is to be applauded. Most MSMEs, however, are based in Port Moresby and Lae, so it is unclear how the distribution of K0.5 million to districts for business support will be effectively used to support businesses that are affected by COVID-19.

National Research Institute (NRI) analysis shows that corruption in the public sector is a significant constraint to the performance of MSMEs. Hence, how the funds are channelled will be critical. District and provincial governments should work with the Department of Agriculture and Livestock (DAL) and Fresh Produce Development Agency (FPDA) to support their existing food security and agriculture development projects. For the rural MSME funding, the districts should allocate funding to microfinance institutions to provide soft loans to financially distressed MSMEs in their district.

The K41.5 million for subsiding freight and shipping costs from the Highlands to the cities is already being spent and has proven to be effective. In fact, there is an oversupply of fresh produce in the city markets as production from Highlands and Central Provinces increased. The Minister for Planning and Monitoring, Sam Basil, commented that the increase in supply in fresh produce has led to a decrease in the prices of fruit and vegetables in the city. This benefits consumers, but not necessarily producers. It is also not sustainable.

The K50 million to support agricultural commodity producers should be used to pay levies for exporters who can pass the benefit to growers and farmers, or support existing programs where there is a need for funding. The Productive Partnerships in Agriculture Project (PPAP) has been effective in supporting coffee and cocoa institutions and the growers and farmers. The stakeholders could identify funding needs for the stimulus funding. Alternatively, the allocation can be used to pay the administrative levy such as for coffee exports, which is currently set a 10 toea per kilogram of green coffee beans. A similar approach could be taken for cocoa, copra and oil palm.

The PNG Treasurer has tasked the Bank of PNG and the MSME Council to assess the impact of COVID-19 on MSMEs and undertake a survey on commercial banks’ responses, respectively. A portion of the K70 million so far unallocated should be allocated to the creation of a SME Relief Fund, either in partnership with a licensed investment company or in collaboration with relevant government agencies. The fund would invest through debt or equity in financially distressed SMEs that have the potential for growth. Besides providing support for struggling SMEs during this challenging time, the fund’s investments in SMEs would provide returns for the partners in the future.

Wage subsidies to employers and support to businesses have been an effective way to minimise job losses, and have been used by the governments of Australia, New Zealand, Singapore, Malaysia and even the smaller Pacific Island Countries of Fiji, Vanuatu, Samoa and Tonga. These governments have provided some support to individuals and businesses. This could be another possible use for the K70 million, though it is not a lot of money.

In any case, the government needs to move quickly to provide eligibility criteria and other details so that qualifying SMEs can apply for financial support from the government.

In summary, the allocation of the K320 million looks balanced and is decentralised but it presents high risks due to corruption or diversion of funds for political reasons. District and provincial governments should channel the allocated funds to government agencies and development partners that have solid track records, and existing compatible programs with similar target outcomes.

K70 million of the amount for households, agriculture and businesses is so far unallocated. At least a portion should be used to create a SME Relief Fund. The fund should operate independently and invest in distressed SMEs in line with its investment strategy, which should align with the interest of all stakeholders. The fund could be restructured to be a credit guarantee once the COVID-19 crisis has passed.