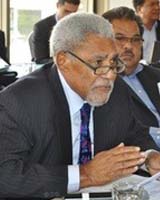 Tess Newton Cain got a chance to meet up with Sir Mekere Morauta whilst he was in Port Vila recently. You can listen to the podcast of their conversation here and read the full transcript here. For a summary of what they discussed, read on…

The main topic of conversation was the ongoing review of the Pacific Plan – Sir Mekere is the eminent person leading the review team. The team was in Vanuatu to undertake consultations with government, civil society and academics as to how the Pacific Plan should be reformed.

In considering how the region had changed in the years since 2005 when the Pacific Plan was adopted, Sir Mekere identified the increased presence and influence of China. Whilst he noted that: “The Pacific Plan is a regional framework. It’s a club. And China is not a member of that club” he also observed, “China is here to stay. And the leaders are welcoming China staying. The question remains is how do we integrate Chinese aid with other donors, multilateral and bilateral?” Another change that Sir Mekere discussed was the increased prominence of sub-regional groups, such as the Melanesian Spearhead Group and the Polynesian Leaders’ Group. But rather than seeing their increased visibility as a threat to regional architecture, he posed the following question: “What are the roles that regional groups can play to strengthen regionalism, cooperation, and integration?”

In assessing the implementation of the Pacific Plan to date, Sir Mekere commented, “There have been successes, failures, and others remain unimplemented.” In terms of the successes he made particular mention of the University of the South Pacific (USP) and the Forum Fisheries Agency (FFA). At the other end of the spectrum, the Pacific Forum Line and Air Pacific have not fared as well in terms of regional delivery of public goods. And then there were other Pacific Plan priorities that have not been implemented, such as bulk purchasing of fuel and pharmaceuticals. However, on the question as of why some initiatives had been more successful than others, he was disarmingly candid: “There’s no easy answer. Because Forum Line is clearly much needed in the Pacific, but it has failed. Why? I don’t really know. I don’t know”.

In terms of what might be a way forward post-review, he stressed the importance of setting priorities that were designed to engender political ownership on the part of Pacific island governments and buy-in from development partners. But underpinning all of this:  “Pacific island countries, as independent nations, must see that this is of benefit to them when it is implemented regionally. Because all of this requires pooling of sovereignty, giving up of some of yours.”

Sir Mekere outlined the methodology being used by the review team (who will travel to 18 countries in total comprising the 16 member states and two associate members: New Caledonia and French Polynesia) in the following terms: “digging and drilling and hunting and gathering of information, and processing that”. He also identified that there was an opportunity for any interested individual or group to contribute to the review by making a submission through the dedicated website:

“We have not only [been] talking to leaders, prime ministers, foreign ministers, finance ministers, directors general, secretaries, environmental heads, businesspeople, professional organisations – we are inviting submissions from different groups. And it’s up to them to tell us what they want to make it public or mix it up with all our materials. So we welcome submissions from individuals and organisations in the Pacific.”

In response to those who have characterised the Pacific Plan as a failure, Sir Mekere put forward this challenge: “I think I’d want people to also talk about why it failed. Just to say failure, is not helpful. I think people who are trained to think should go deeper and point out why it failed, and in what areas should we repair. Because this review is a repairing job, repair the failures of the past to make sure we go into the future.”

Turning to the question of how more or better political ownership of the Pacific Plan might be engendered in the future, Sir Mekere acknowledged that this was a difficult issue but identified a possible way forward: “we’ve got to have stronger, more disciplined processes that involve most importantly the leaders. Leaders getting into more detailed discussions, of the costs and benefits of regional initiatives.”

Sir Mekere acknowledged the challenges posed by Fiji’s exclusion from the Pacific Islands’ Forum, whilst noting that the underlying issues required political solutions: “Fiji is a very important country in the Pacific. A leading country … We look to Fiji as a partner. And Fiji has not been there. For Pacific regionalism, it’s not helpful.”

He also identified problems in relation to the structure and functions of the Pacific Islands Forum Secretariat (PIFS), some of which have been canvassed elsewhere. He noted, “it’s all wrong in the regional architecture. Because that’s the body that’s closest to the leaders. Can it play a more coordinating role than it is doing now? More Forum leading rather than in a group. And make that connection between agencies and the leadership and the priority setting.” With reference to the review of the Secretariat last year, he endorsed the approach of waiting until the Pacific Plan was revised before making significant adjustments to PIFS.

This is the second in a series of interviews that Tess Newton Cain is undertaking with various Pacific leaders and influential voices. The first, with Director General of the Melanesian Spearhead Group Secretariat, Peter Forau, can be found here.

This blog is a part of a series on the Pacific Plan Review. Other blogs in this series can be found here.

Mekere Morauta is the Review Leader of the 2013 Pacific Plan Review. Sir Mekere served as the sixth Prime Minister of Papua New Guinea between 1999 and 2002, and later as Leader of the Opposition. He continued to serve in leadership roles in Government until May 2012, when, after twenty years in Parliament, he announced his retirement from politics.