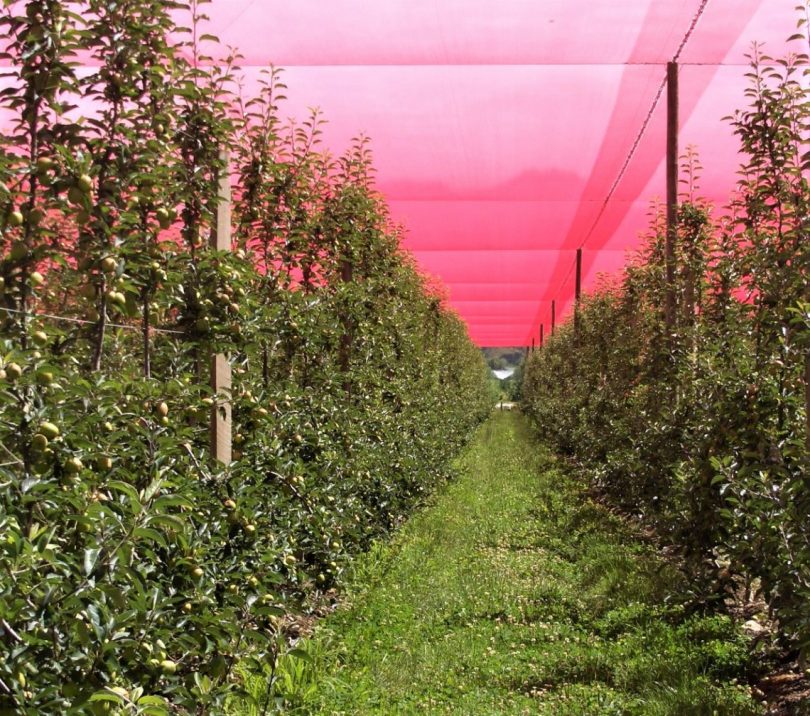 Spring has arrived and with it the new season for New Zealand’s horticulture and wine growing industry, now worth an estimated $9.5 billion to the country’s economy. Over the past decade, strong growth in export markets has led to widespread expansion of areas under planting and a shift towards more productive, higher-yield varieties, which in turn is driving increasing demands for labour.

The Recognised Seasonal Employer (RSE) scheme, which allows for up to 14,400 seasonal workers each year, mainly from the Pacific, to pick, pack and prune horticultural crops, provides a critical supply of seasonal labour during peak harvest periods. In a normal year without COVID-19 travel restrictions, RSE workers start entering the country in sizeable numbers from October onwards.

Figure 1 shows RSE arrivals from September 2019 through to 19 March 2020 when the New Zealand border was closed. Several thousand RSE workers arrived in October and November 2019 and, following a quieter period over Christmas, numbers rose again from February 2020 to coincide with the apple harvest. 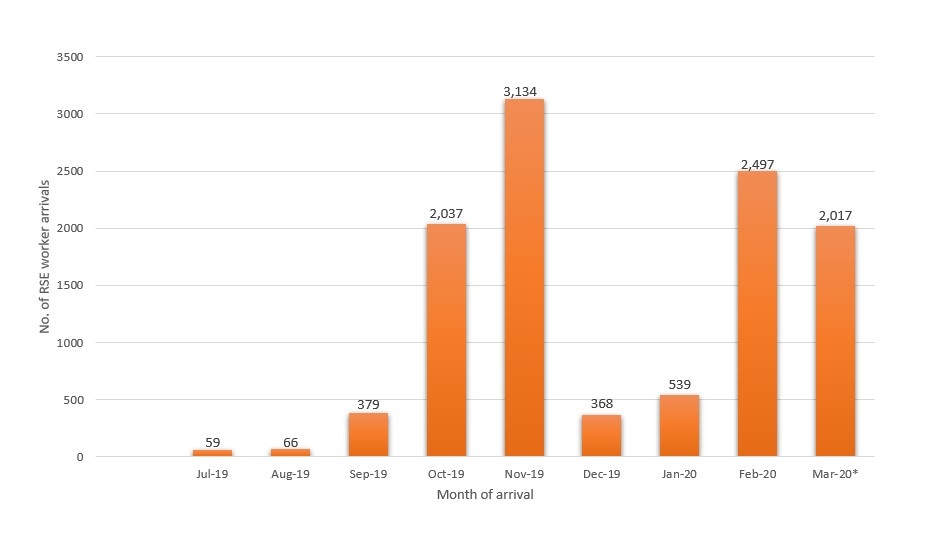 In early September 2020, there were around 7,000 RSE workers still in New Zealand due to COVID-19 travel restrictions. About 2,000 workers have indicated they would like to be repatriated, leaving around 5,000 RSE workers for spring work. If these workers can be easily shifted between employers and regions, then the industry’s RSE labour needs should be met for October and almost met for November.

There are however some important caveats: 1) there are competing seasonal labour demands across crops and regions; 2) RSE workers are only one component of the industry’s total seasonal workforce needs; and 3) the majority of RSE workers will have been in the country for seven to twelve months. Workers will be physically tired and missing their families which may affect their workplace productivity.

Recent research by the New Zealand Institute for Economic Research (NZIER) on horticulture labour supply and demand estimates the net surplus and deficit of available seasonal labour across crops and regions from July 2019 through to July 2021.

Figure 2 highlights three points: 1) the regional variations in the availability of seasonal labour; 2) the widespread shortfalls of labour at different times of the year; and 3) the competing demands for labour across crops and regions to meet these deficits. This research, undertaken prior to COVID-19, assumes availability of RSE workers and other temporary foreign workers. The deficits of migrant labour will be greater from September 2020 onwards if borders remain closed. 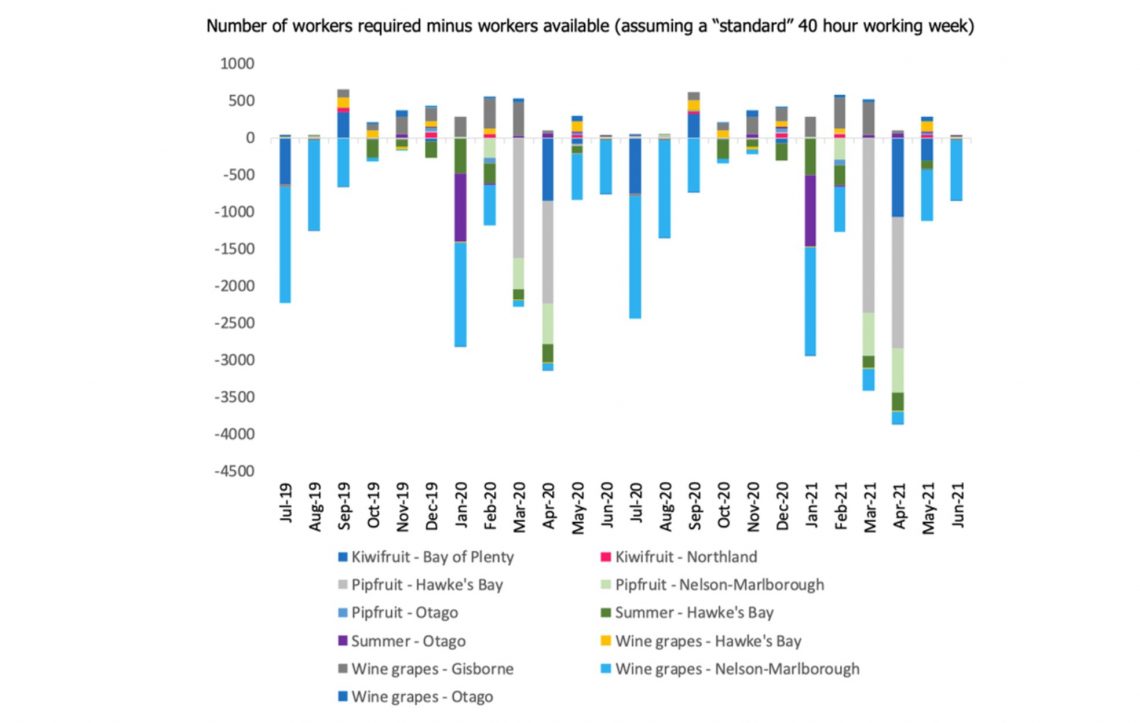 Figure 3 shows the total number of permanent and casual workers available across all crops and regions. The dark blue shading at the top of each bar represents the RSE workers. In all months of the year, except September, New Zealanders – permanent staff, Work and Income clients, Kiwis on the New Zealand seasonal work scheme, and casual workers – make up a larger share of the seasonal workforce than RSE labour. In Central Otago and Marlborough, two regions with historically low unemployment rates, working holiday makers are the biggest component of the casual seasonal workforce, followed by RSE workers. This year, international travel restrictions mean there will be fewer temporary foreign workers available. 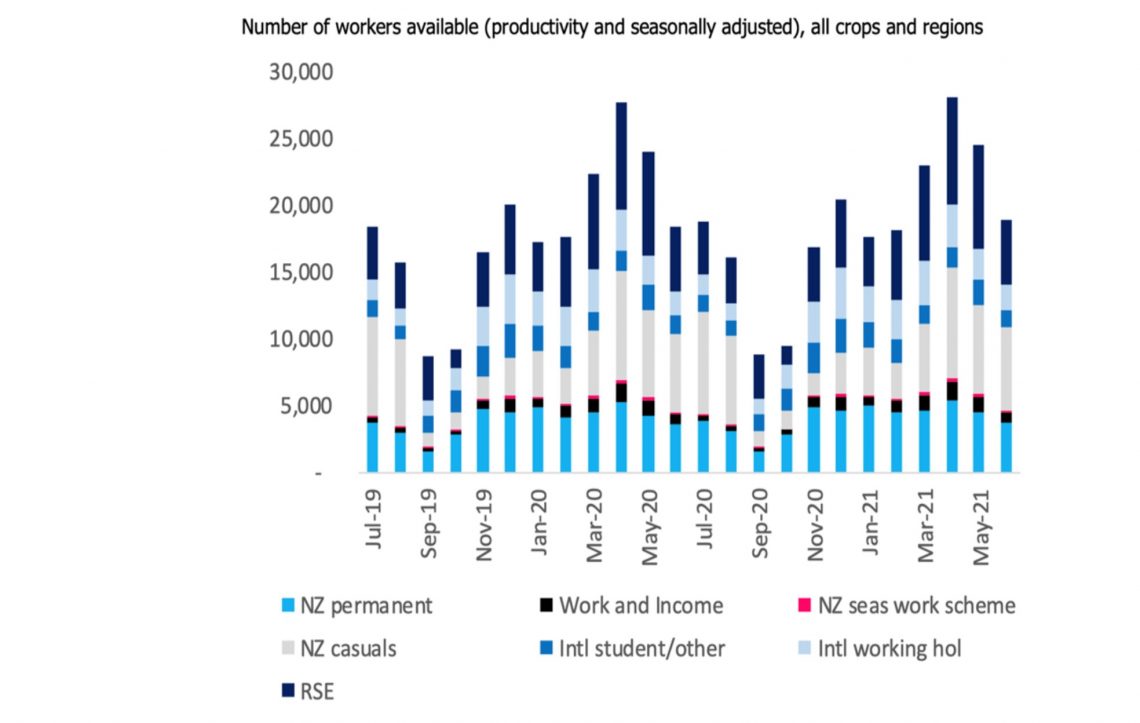 The horticulture industry has been warned by Government that it’s unlikely they will get seasonal workers through the border this year. A range of strategies are being considered to encourage locals into seasonal work, including more flexible work hours, using technology (e.g. automated picking platforms) to lower the physical work requirements, and potentially offering higher rates of pay.

But there are barriers to engaging locals, linked to the nature of the work, the long hours, and the location in rural areas. While the unemployed and students living in rural areas may take up seasonal jobs, it is unlikely that New Zealanders based in urban areas are going to move to the regions for short periods of seasonal work. Furthermore, while RSE workers enter the country solely for the purpose of undertaking seasonal work, and have a visa that ties them to their employer, New Zealanders face no such restrictions – they can leave the job at any time.

In Central Otago, which relies heavily on working holiday makers, lack of suitable accommodation is another constraint to employing locals from outside rural areas. Backpackers often live in self-contained campervans in campgrounds or on the worksite. It is unlikely Kiwis will accept the same accommodation standards. Central Otago growers are looking at options to bus locals in from Queenstown and other nearby towns for work this coming season, but this strategy is unlikely to provide sufficient labour.

Industry leaders warn of a ‘perfect storm’ brewing for the horticulture industry if restrictions aren’t eased for re-entry of RSE workers. The summerfruit industry in Central Otago is forecasting a shortage of 1,500 workers for thinning in October, and a shortage of 5,500 workers for the peak cherry season during December and January. This will leave fruit on the trees and impact severely on the region’s economy to which the cherry harvest contributes $3 million a day. For the pipfruit industry in Hawke’s Bay, approximately 10,000 seasonal workers are needed from October onwards to prune and pick $1 billion worth of fruit. According to New Zealand Apples and Pears’ Chief Executive, the labour shortage has the potential to cripple the region’s economic recovery.

No substantive decision on allowing RSE workers, or other foreign labour, back into the country is likely until after the election (delayed to October 17). The Government has extended the visas of RSE workers still in the country through to December 2020 which provides growers with the certainty of some RSE labour. However, greater operational flexibility is required to allow RSE workers to be more easily shared between employers and regions in an attempt to best manage labour needs for spring.

On 22 September, the Government also announced a Supplementary Seasonal Employment (SSE) visa which will be automatically issued to around 11,000 working holiday makers in New Zealand, whose visas would otherwise expire between October and March, to stay on to fill seasonal jobs where locals are not available. This will be welcome news for growers and provide a much-needed additional source of labour. However, more seasonal workers will be required for peak harvest periods commencing in late 2020/early 2021.

By January 2021 (if not before) border restrictions ought to be eased to allow Pacific workers from COVID-free countries, which include Vanuatu, Samoa, Tonga – the three largest suppliers of RSE labour – to return to New Zealand as seasonal workers. If some countries aren’t keen, this could be an opportunity for others, such as Solomon Islands, to gain market share in the RSE.

When RSE workers enter the country, employers would like to quarantine workers in fit-for-purpose RSE accommodation. During Alert Level 4 or ‘lockdown’, RSE employers were required to implement strict health and safety measures to keep RSE workers in their isolation groups at work and in their accommodation. If RSE employers follow these rules again, there should be no reason why workers can’t complete the quarantine requirements at their RSE accommodation, rather than in managed isolation at the border.

Horticulture has been put forward as the ‘ideal sector’ to spearhead New Zealand’s economic recovery post-COVID. However, the industry can only play that role if labour is available to get fruit picked, packed and to market. Australia has opened up its borders to Pacific workers for the Northern Territory pilot and under the Seasonal Worker Programme and Pacific Labour Scheme to help address their approaching labour shortage. New Zealand should follow Australia’s lead and open up a special pathway for RSE workers to return.