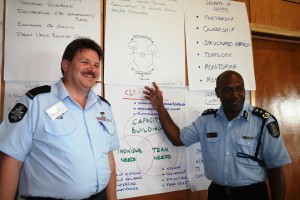 It is too early to reach substantive conclusions about the impact of RAMSI. Only time will tell, as Solomon Islanders digest the outcomes and test whether the systems and security fostered survive into the post-RAMSI era.

Nicholas Coppell’s reference to one RAMSI achievement as being the strengthening of the Office of the Auditor General brought back a memory of a discussion I had in Honiara with an Australian economist who’d been sent to assess the country’s needs about a year before RAMSI’s arrival. At that time the Auditor General was unable, for safety reasons, to venture to his office and no audit reports had been prepared for many years – from a time even before militia began to destabilise the country. On that account alone, RAMSI can certainly be said to have strengthened the “machinery of government pillar”. The question now is, “will it last?”

Nicholas is also of the view that the “law and justice pillar” outcomes are positive. There is no question that the restoration of law and order and the surrender of almost 4,000 firearms were achievements, but how long can the current settled state be sustained? It is common knowledge that some weapons caches remain undetected and, in the course of a consultancy in which I was engaged with Correctional Services Solomon Islands, senior officers reported that this was a major concern of theirs in relation to prison security.

Those officers were happy with the RAMSI assistance from 2006 but had less pleasant memories of the early input of staff whose Australian prisons experience and perspective was applied directly with no thought to the idea that the Solomons prison community might be (and really is) markedly different. Treating prisoners the Australian way got the exercise off to a negative start. But RAMSI learned and moved on to an improved approach. The major remaining impediment to successful outcomes for RAMSI in Correctional Services may be the over-built and maintenance-costly Auki prison.

Mistakes made early in the implementation of RAMSI and the uninformed selection of prison officers was but one. However, Terry Brown’s statement that “Armed troops patrolled the streets of Honiara and back roads of Malaita for many years” gives the wrong impression. In Honiara, as I recall, the display of arms lasted about two weeks before army commanders felt comfortable about sending their soldiers into town unarmed – and these were very few, for banking and shopping.

It might be argued that even for a short period it was unnecessary for soldiers to be armed, but military commanders had to guard against even the remote possibility of surprise attacks. In any case, when RAMSI put on a show of equipment at Town Ground ten days after their arrival, it was attended by an enormous crowd. It was a heartening sight to see a lively flow of pedestrians along streets that for so long had been dangerous and deserted. They came to see the display of helicopters and the breaking and burning of confiscated weapons. As each gun was sawn in two, a cheer rose from the pressing crowd. Noticing curious young men and boys cautiously eyeing armed soldiers I ventured to introduce the two parties. Once they got talking, both sides relaxed. It seemed that it was the soldiers who had the greater need to relax.

Terry’s observation that “RAMSI support was absent in areas arguably much more important: health, education and infrastructure” is beside the point. RAMSI was not intended to be a development assistance agency.

Ashley Wickham has said,“RAMSI has given Solomon Islanders a glimpse of how things ought to be.” True; but he went on to express disappointment that, “If RAMSI could not steer successive parliaments and leaders to using the institutions of government properly, then it has failed.” There was much that RAMSI could do to bring security and to build capacity and institutions – but change the behaviour of Solomon Islander politicians?

There is widespread agreement with Ashley’s observation that “RAMSI became an administration that paralleled SIG but had superior resourcing – both in finance and human resources”. It would have been difficult to avoid this perception, and a key lesson to be learned from the intervention will hopefully lead to guidance as to how to intervene sensitively in similar circumstances, in a way that minimises the risks of undermining the established administration.

RAMSI is only part of the recovery picture. If Solomon Islands is to regain strength and secure lasting peace, then its political leaders need to play their complementary role. Prompt action on recommendations emerging from the Truth and Reconciliation Commission Report, for instance. It is disappointing that apart from the anticipated groans of political displeasure at the unofficial release of the Report there appears to be no public and little private debate on its content.

Ashley expresses it well in saying that, “many people, including national leaders, see government as a garden of opportunities to harvest as they see beneficial for themselves and their voters. And the country wants for a majority of visionary and courageous leaders to provide the space, the resources and the authority to effect change.”

RAMSI, with mixed results, has done its bit to provide some needed space by first securing the country against armed gangs and then repairing and strengthening the three “pillars” of governance. It’s time for Solomon Islands leadership to seize the opportunities this provides, and build on them. The Solomon Islands public is still looking for a sign of a political will to do so.

Dr Graham Baines lived and worked in Solomon Islands at both national and provincial government levels for the greater part of the 1980s and has since made many return visits from his Brisbane base.

Dr Graham Baines lived and worked in Solomon Islands at both national and provincial government levels for the greater part of the 1980s and has since made many return visits from his Brisbane base.