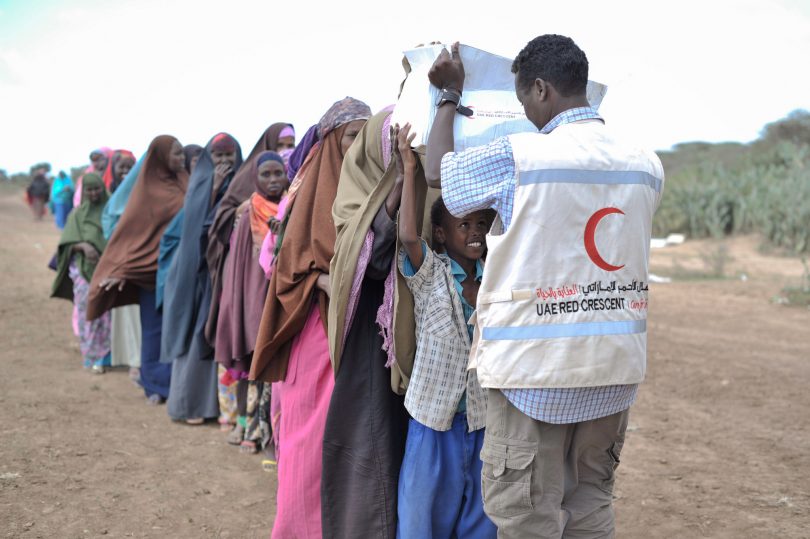 In 1960, the world had 20 states providing foreign aid to developing countries. In 2014, this number more than doubled to 48 official donors, which is an underestimate as it doesn’t include donors like India, China and Brazil that do not report to the Development Assistance Committee (DAC).

This donor expansion occurs even as many observers worry about the relevance and impact of Official Development Assistance (ODA). This form of aid is increasingly a dirty word, synonymous with lack of innovation, dependency and corruption.

How should we make sense of the paradox of high donor growth in this loveless environment? 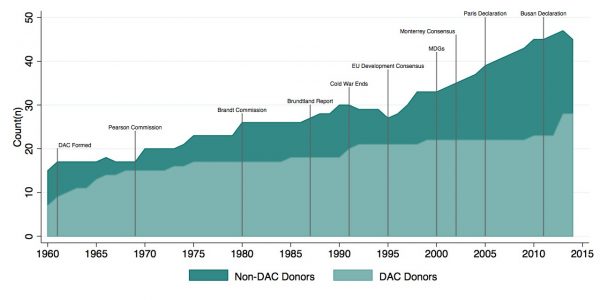 World history has ingrained donorship as something that is good, desirable and appropriate for all modern states. American President Harry Truman’s inaugural speech presented aid as an obligation of all ‘developed’ states. Even states emerging from colonial subjugation saw the potential for identity as a donor, albeit framing their role as a ‘partner’ respectful of state sovereignty. This association between advanced nationhood and donorship has carried over into recent times, for example, with prospective EU members assessed by their capacity to participate in European development initiatives.

In a recent ODI paper with Liam Swiss of Memorial University, we suggest that becoming a donor is muscle-flexing on the world stage, a display of a state’s financial wealth and bureaucratic capacity to assist weaker nations. This is an important reason why western democratic liberal countries are donors, why new EU members must become donors, and why even states that continue to receive aid increasingly provide it as well.

But if foreign policy status is the prime motivation for ‘donorhood’, what kinds of aid providers are new donors becoming in practice? Are these new players more than just donors in name? Are they adopting the donor organisational form as well as adhering to its mission critical functions?  Or is the gap growing between new donors’ organisational form and their functions?

The mismatch between donor form and function

We paint a sobering picture of the kinds of new donors the world is getting. In an analysis of 26 new donor countries (NDCs) over the 2010-2014 period (the best possible sample, though admittedly a restricted one), we highlight a growing gap between old and new donors’ commitment to development as proxied by quantity of aid, allocation to the poorest and most fragile countries, and commitment to multilateralism.

For example, few NDCs have yet to attain the levels of generosity achieved by more established donors. NDCs that are DAC members have a median ODA/GNI ratio of 0.125% over 2010-2014, while NDCs that are not DAC members but report to the DAC have a median ratio of 0.09%. Except for Liechtenstein, Turkey and the UAE, established donors exhibit greater development largesse. 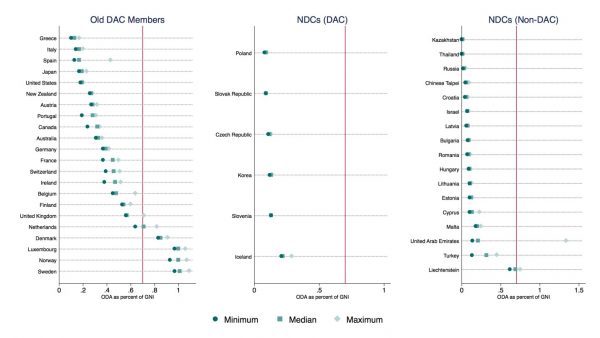 It is only in their allocation through multilateral channels that we might view NDCs expressing a stronger commitment to global development. Nonetheless, disaggregating donors by EU membership status illustrates a more nuanced allocation pattern. Non-EU NDCs provide less than 20% of their ODA through multilateral channels, in contrast to EU NDCs that disburse more than 70% of their aid multilaterally. Obligatory contributions to the EU are the main culprit for this discrepancy, suggesting restrained support for multilateralism among the wider group of NDCs.

That new donors are very different from established ones is not surprising. NDCs tend to invest bilaterally within their region, with poverty and humanitarian needs and multilateralism very much secondary objectives. They are also climbing a learning curve of unknown steepness. Nonetheless, the fact that we see little variance in aid investment or allocation patterns (with perhaps the exception of Turkey and the UAE) suggests that even as NDCs gain experience and capacity as donors, their expressed commitment is path dependent.

These results show it is plausible that NDCs are assuming the donorship mantle without a strong commitment to development in terms of ODA spending, allocation to the neediest nations and support for multilateralism. Admittedly, this analysis cannot be interpreted as suggesting that DAC donors are complying with their collective responsibilities either, where rhetoric is known to exceed reality. Nonetheless, what we observe is a decoupling between adopting to the donor form and adhering to core donor functions.

What should be done?

More donors and more aid should be a win-win for development and the aid community, especially if rumored cuts to some of the largest DAC donors’ aid budgets materialise. New donors can increase the viability of the aid project and revitalise the field with new actors, instruments and forms of engagement.

And yet, more donors exhibiting less commitment to development is worrisome. Beyond the obvious risks of fragmentation and duplication, the growing gap between form and function undermines important donor obligations for which no distinction between old and new actors should be made.

Concerns are also real that the responsibilities of established donors will be downgraded to the lowest common denominator or result in a real decline in their bargaining power. A shared standard of performance could militate against such a possibility. Unfortunately, global benchmarking exercises are caught in a global politics trap, with no acceptable site for either regulating or monitoring the expanded universe of bilateral donors.

Good global citizenship on the part of all donors will clearly not happen overnight. Established donors must model behaviours and reduce the gaps between their intentions and implementation. NDCs will need to self-regulate more, ensuring their search for reputational legitimacy is not always decoupled from a strong commitment to some of the mission-critical functions of a donor. And the DAC will need to move quickly to reform along the lines of what DAC Chair Charlotte Petri Gornitzka has described as “going from being a club to a hub for development.” No state should forget the ultimate purpose of becoming a donor is to act like one.

Nilima Gulrajani is a Senior Research Fellow at the Overseas Development Institute. Download the ODI paper on which this post is based here.

Nilima Gulrajani is a Senior Research Fellow at the Overseas Development Institute.