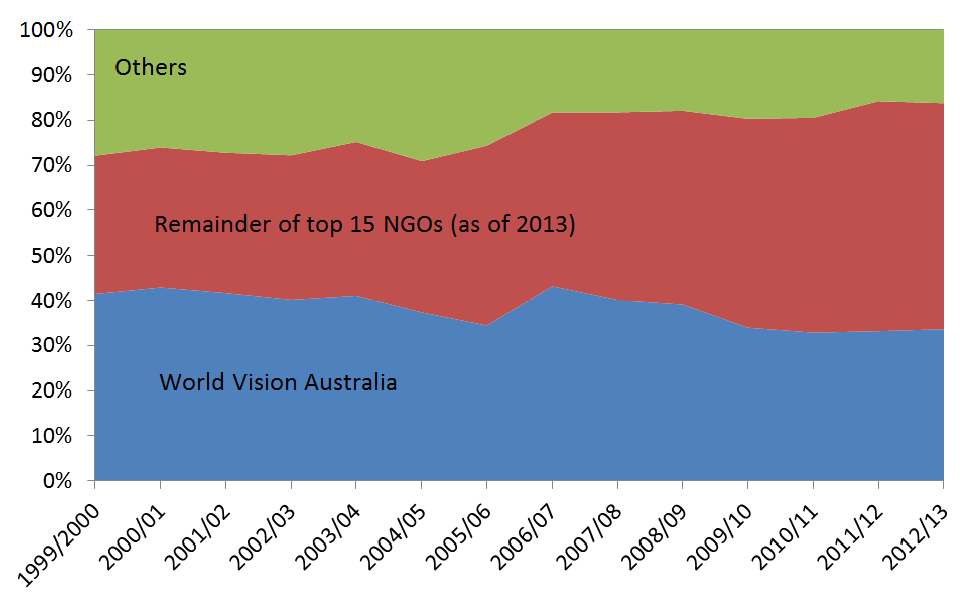 In a post earlier this year we highlighted that since about 2006 public giving to international development NGOs has flatlined, just keeping up with inflation. We are now only giving nine cents in every $100 we have after tax to the overseas poor, down from 14 cents at the height of our generosity in 2004 and 11 cents in 2007. While we are still getting richer, we are also getting stingier.

It’s a dismal story, but what does it mean for individual NGOs? ACFID membership [pdf] has grown rapidly over the last few years, from under 80 members in 2008 to over 120 in 2014, but total AFCID income has not increased, so we have many more NGOs sharing an essentially static pie.

While the average ACFID NGO today must receive less from the public than five years ago, there are some big winners and losers. We focus here, as in our 2013 analysis, which ended in 2010/11, on the top 15 development NGOs ranked by their community donations in the most recent year for which we now have data, 2012/13. World Vision’s share is now steady at a third, and the other 14 are taking an increasingly large share, almost 50% by 2013. (Just a reminder that our universe is all ACFID-member NGOs plus two big non-ACFID development NGOs, MSF and Compassion. And that we are only looking at public donations, not government support.)

Figure 1: Share of donations over time – World Vision Australia (WVA) and others

If we look just at the last two years — updating our earlier analysis, which finished in 2010/11 — we can see that most of the top 15 experienced growth, some very rapid growth. Note the recent fundraising success of the two UN agencies for refugees (UNHCR) and for children (UNICEF). Our 2013 analysis, identified seven high-growth or “insurgent” NGOs. Most of these enjoyed high growth in donations in the last two years as well. But Compassion and SCF are no longer in the high-growth group. 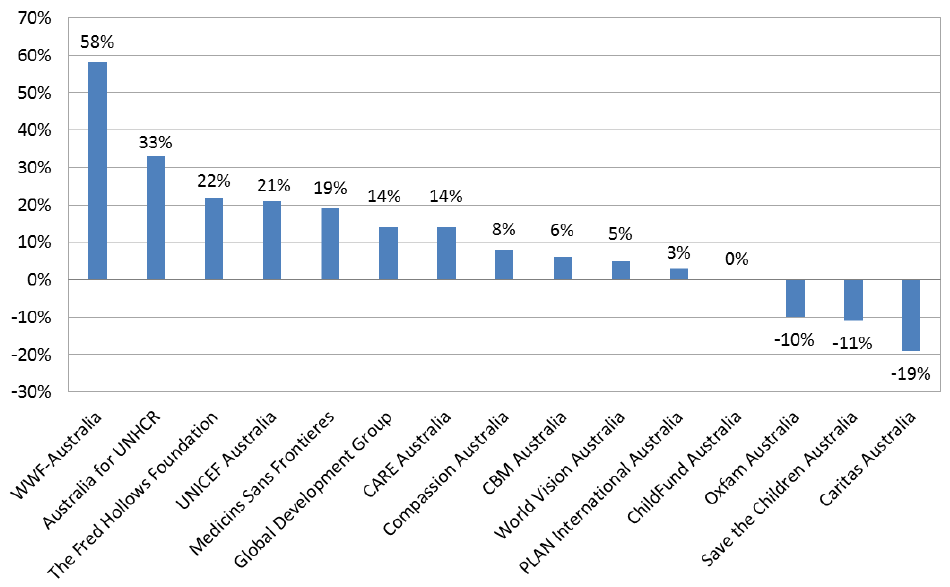 Figure 3: Winners and losers in the last two years (adjusted for inflation; 2012/13 prices) 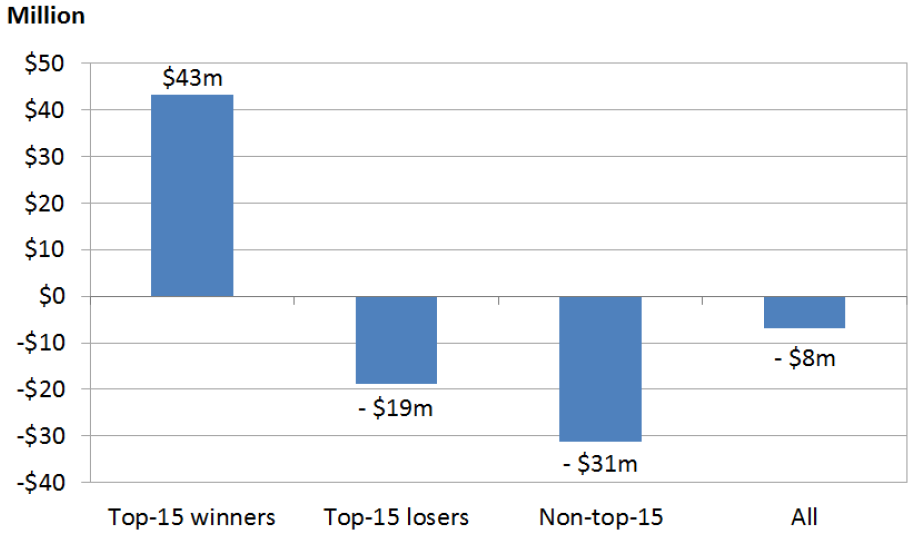 Figure 4 takes a longer term view of the changing ranking of Australia’s top development NGOs since the turn of the millennium. We use shares of donations to all development NGOs as our measure, and exclude World Vision from the figure (since it is singled out in Figure 1, and would require a very different scale). As Figure 1 shows, World Vision still stands alone in the development sector, though its dominance is reduced. There has been considerable churning among the 14 other top 15 NGOs. In 1999/2000 there were, in terms of public fundraising, five “second-tier” development NGOs: Oxfam, ChildFund, Caritas, Compassion and CBM, all with shares of about 4% or $15 million (in 2012-13 prices). In 2006/07, there were three second-tier fundraisers: Oxfam, Compassion and MSF, all with shares of 5% or $40-50 million. Today there are two: Compassion and MSF, both with a share in excess of 7% (or about $65 million). Oxfam is now a “third-tier” fundraiser alongside Fred Hollows (both with shares of around 5% or $43 million). ChildFund and Caritas have moved down into the fourth-tier. 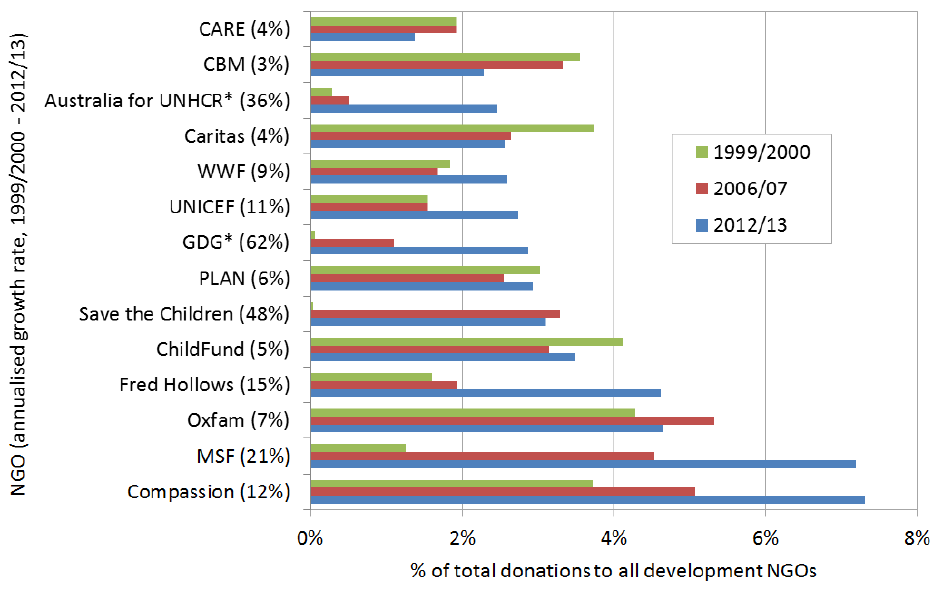 This analysis raises a number of questions. There is the awkward reality that the second and third largest development NGOs in Australia (MSF and Compassion) are becoming increasingly important but choose not to be members of the peak body, ACFID (for reasons that require a separate post). And for NGOs more generally, there is the question of whether the churning we observe is a zero-sum game. The fact that some NGOs are charging ahead with their fundraising while total giving is flat does not necessarily mean that those who are thriving are doing so at the expense of those who are struggling, but this must certainly be a risk.

Jonathan Pryke is a Research Officer, and Stephen Howes is the Director of the Development Policy Centre.

Note: WWF appears in the ACFID data as one of the top 15 fundraisers among ACFID members, but is excluded from this analysis as the majority of their funding from the community is directed to domestic campaigns. Its funds are, however, still included in the ‘total’ amount of community funding to development NGOs.