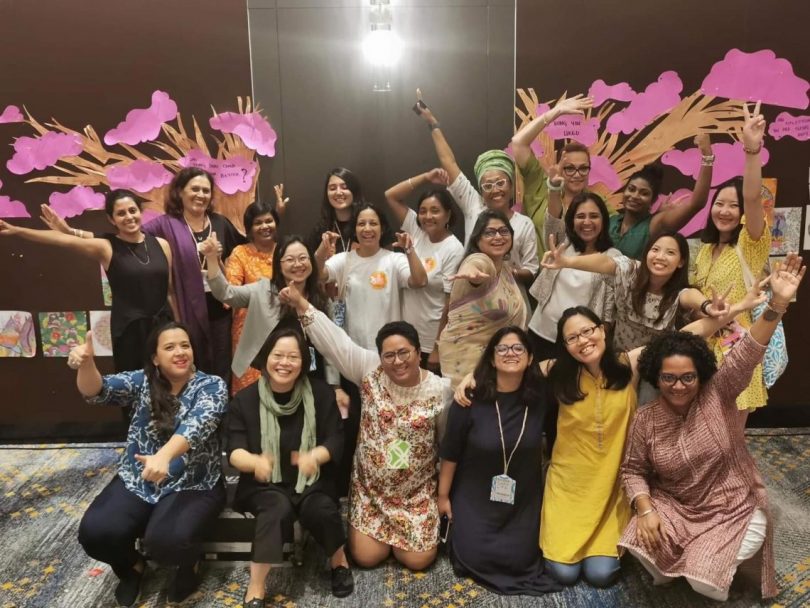 Have you ever wondered what the term Asia-Pacific denotes? A vast stretch of geographical land masses across Asia and the Pacific gathered into one grouping, or is the Pacific a token inclusion, where the ‘P’ is silent? Examining data, papers, and policies made for the Asia-Pacific region would have you believe that. As a result, across political discourse, media debates and public discussions, a new developmental and geopolitical need is being voiced – which has been amplified by an even fiercer feminist call – to be known as the Pacific region, with a distinct identity and voice from Asia.

A critical forum where we amplified the Pacific voice and the might of the Pacific feminist movement was at the Revolutionising Philanthropy conference organised by Prospera’s Asia and Pacific members in Bangkok in September 2019, the first event of its kind. Around 150 women, girls and trans* activists from 20 countries, speaking eight different languages, converged to examine the multifaceted reality of feminist funding in Asia and the Pacific. Both the Fiji Women’s Fund (FWF) and Urgent Action Fund Asia and Pacific (UAF A&P) see our role in the Pacific as critical to ensuring dedicated resources that go beyond traditional fundraising – such as forming sharing networks of communities, creating knowledge sources, and identifying volunteers to share time and expertise – benefit Pacific women’s groups, networks, and organisations. While a few women’s rights organisations in the Pacific have engaged with international women’s funds such as the Global Fund for Women and Mama Cash, there is still a lack of knowledge on the full role of women’s funds. Thus, this convergence, organised with six other funds from the Asia and Pacific region, became an ideal platform – a safe space for our Pacific grantee partners – to interact with other organisations, regional allies and funders, and talk about resources, power, and the processes through which they are negotiated.

How we collaborated to mobilise resources

“That was the first time, since [my] organisation has been running for over 10 years, that we have been invited to attend such an international meeting. It gave us the opportunity to highlight the challenges we face when it comes to amplifying our voices [from the Pacific] … and share at an international space – a feminist movement space. My community back home was looking forward to hearing from me when I got back. The first thing they asked me was ‘qai va cava (how was it)?’ They were really keen for me to … share OUR story.”

This experience has reinforced the ways and methods by which FWF and UAF A&P will collaborate in the coming years: we will co-host learning and sharing spaces for ourselves and our grantee partners as we accomplished in Bangkok, and we will also actively work towards attracting more resources for Pacific feminist and women’s movements.

Spaces such as the convergence are important as they help to bring together diverse groups of activists, national and regional women’s organisations, women’s funds and funders. It facilitates deeper conversations where we can question each other and hold each other accountable for our roles in strengthening the feminist ecosystem. It embodies the feminist mantra of ‘the personal is political’ – for every participant was an active contributor to developing an understanding of redefining funding that has potential to strengthen feminist movements in Asia and the Pacific.

Where are we headed? Our scoping study

Another aspect of our collaborative approach has been to understand the current funding landscape in the Pacific to better ascertain who to raise resources for, for what programs, and from which funders? (We refer to funders as organisations that provide grants to grassroots organisations and donors as the larger multilateral or bilateral agencies and/or philanthropic organisations that donate towards development work.) 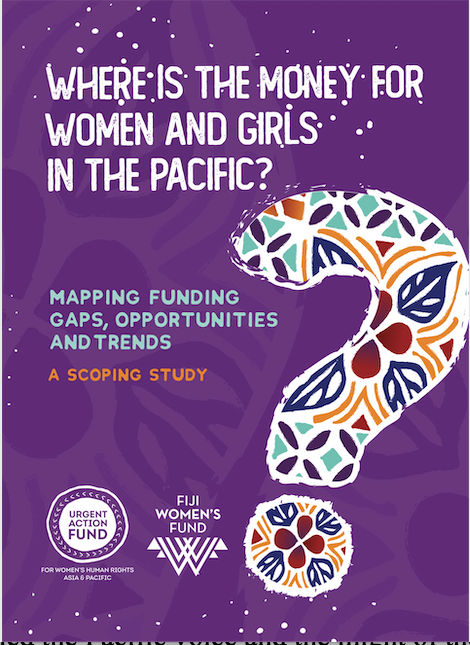 The low figure of funding flowing into the Pacific for women’s rights work is disappointing. The scoping study found recurring barriers that inhibit the flow of resources to the Pacific include key reasons such as risky, costly, fragile, conflict affected, fragmented, and the often-cited small. But to paraphrase Epeli Hau’ofa – who in Our Sea of Islands reflects on the notion of smallness often associated with the Pacific – what if smallness is a state of mind? If it is a state of mind, then we need to strive to change it.

As Pacific Islanders, our myriad experiences of working in feminist spaces have greatly shaped our analysis and praxis. Pacific feminists and women human rights defenders have long claimed and reclaimed our voices, languages, and spaces. We have a common goal as the global feminist movement. Yet the barriers to the realisation of this goal need region-specific solutions. The Pacific is no exception. The challenges we face as the feminist movement in the Pacific therefore must be overcome using our experiences and framed by our own cultural and geopolitical context. This is why we must resist any efforts to keep the Pacific as the silent P in an Asia-Pacific grouping and find our own distinct Pacific voice.

If you would like to know more about our upcoming scoping study, please write to us at info@womensfund.org.fj or info@uafanp.org. Or Join us in our efforts to better resource the Pacific feminist movement!

Menka Goundan is the Senior Program Manager at the Fiji Women’s Fund. She is also a member of the Program Advisory Committee of the Asian-Pacific Resource and Research Centre for Women (ARROW).

Virisila Buadromo co-leads the Urgent Action Fund for Women’s Human Rights Asia and the Pacific. Prior to joining UAF A&P, she led the Fiji Women’s Rights Movement for 14 years.