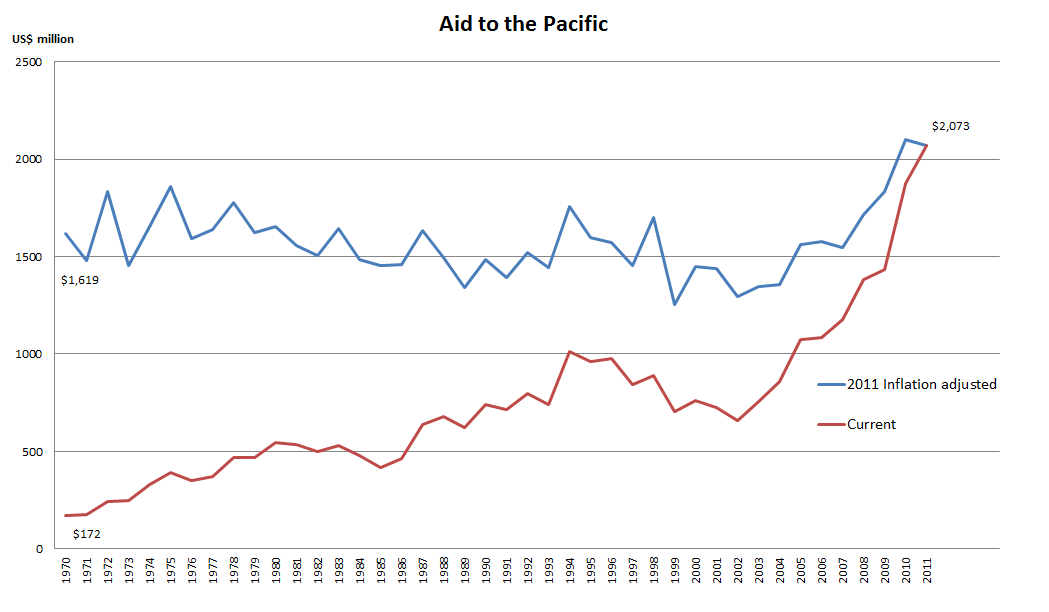 “[In 2010] both in towns and in the country, ‘self-reliance’, sometimes radicalised as ‘direct action’, has become a catchword, as governments have been forced to retract services, in the wake of aid donors turning their attention elsewhere.”

That is a snippet from the eminent Australian journalist Rowan Callick’s ‘doomsday scenario’ for the Pacific which he wrote in 1993 as a part of the National Centre for Development Studies’ forward-looking research project Pacific 2010. Callick is an acute observer of the region, and his pessimism about aid to the Pacific was well-founded at the time. Aid volumes (in inflation adjusted terms) fell by 22% from their peak in 1975 to 1993, when Pacific 2010 was written. Aid flows to the Pacific would continue this downward trend until hitting a near historic low of US$1.3 billion in 2002, a 30% decline from its 1975 peak. But then something surprising happened: aid began to dramatically rebound.

In the ten years leading up to 2011, aid to the Pacific, as recorded by the OECD, increased by 60%. (Note we only include aid to countries now independent, not colonies. The 14 countries analysed are all members of the Pacific Islands Forum.) By comparison, global aid increased by 46%, and the Australian aid budget doubled. Aid flows to the Pacific have increased so rapidly that they are now at their highest levels in history. But who has benefited from this tide of new aid? And where has it come from?

Who has benefited from the surge?

Some clear winners and losers have emerged from the surge of aid in the past decade. Aid to individual Pacific Island Countries remains extremely volatile. Take a look at this time-series visualisation to see for yourself. To control for that, I compare average aid for 2009-2011, with average aid from 2000-2002. 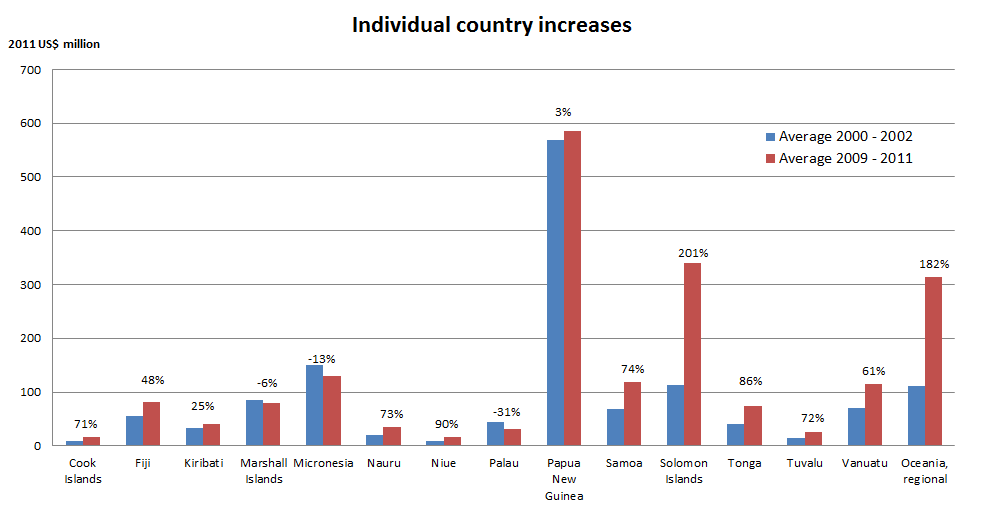 Note: Because of the year to year volatility of aid flows to the Pacific a three year average, calculated a decade apart, has been calculated for comparison.

Not surprisingly, the Solomon Islands has been the biggest winner from the scale-up, on account of RAMSI. Its aid has tripled over the last decade. Regional programs have increased massively, with such aid increasing almost as fast as aid to the Solomon Islands. Countries reliant on the US have suffered: the Marshall Islands, Micronesia and Palau all get less aid today than a decade ago. By contrast, most countries with a close relationship with Australia or New Zealand have done well: Cook Islands, Nauru, Niue, Samoa, Tonga, Tuvalu and Vanuatu have all seen aid flows increase at rates that are higher than the overall increase (of 60%). Even Fiji has seen a 48% increase. PNG is the big exception. Its aid continued to fall to the mid-2000s, and it has only recently recovered to reach the level of the start of the decade. Indeed, the biggest shift overall, in terms of the recipients of aid in the Pacific, is the relative shift in aid away from PNG to the rest of the region, as this figure shows. 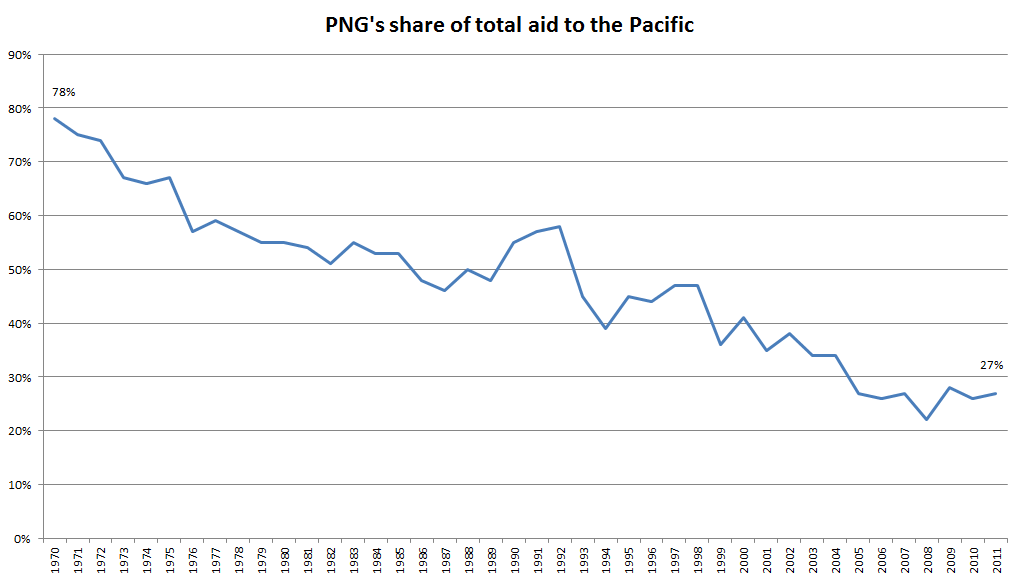 Below is the current (2011) distribution of aid flows to the region. 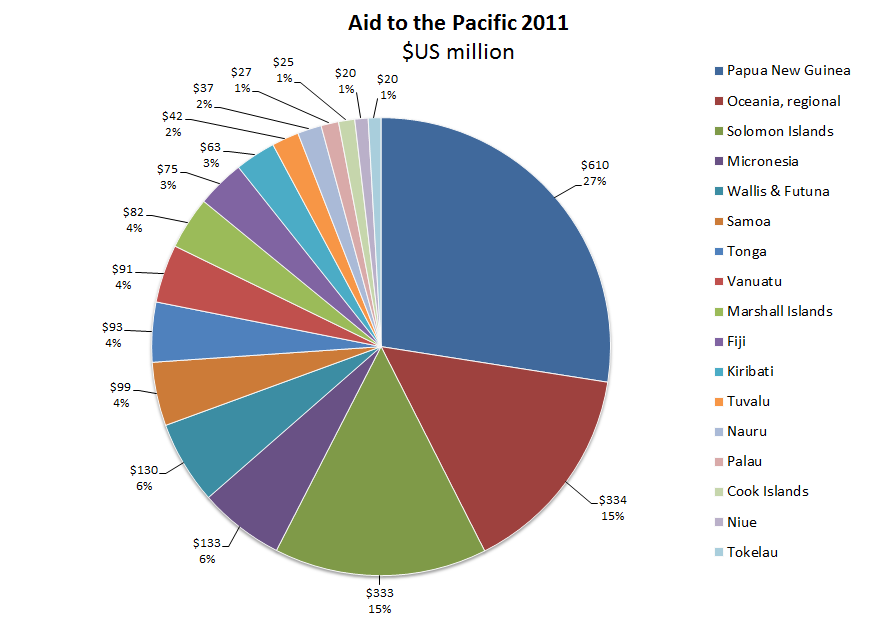 Where has the surge come from?

Australia is by far the largest donor to the Pacific. It has played a critical role in the aid surge, with its increase in aid alone contributing to 65% of the total since 2002. The Australian aid scale-up, however, has also been quite selective with almost three quarters of it being accounted for by the Solomon Islands (41%) and regional programs (33%).

However, Australian aid hasn’t grown much faster than the total volume of aid to the Pacific: its 65% versus the overall 60%. Aid from other donors has also grown: the figure below shows aid from the top 10 in 2011. 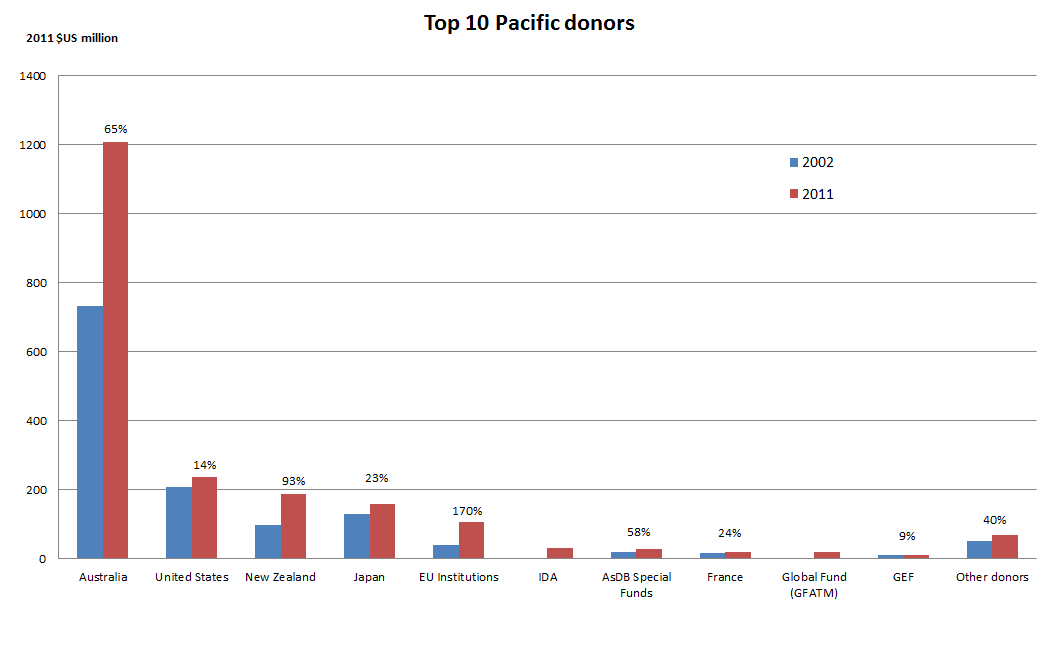 Note: Percent figures reflect the increase in aid volume from each donor between 2002 and 2011.

Since 2002 the World Bank’s IDA fund and the Global Fund have both moved into the top 10 Pacific donors, pushing out Canada and the United Kingdom, while the remaining eight have stayed the same.

The top six donors to the region accounted for 93% of total ODA to the Pacific in 2011. The chart below illustrates just how reliant the Pacific is on this select group of donors. 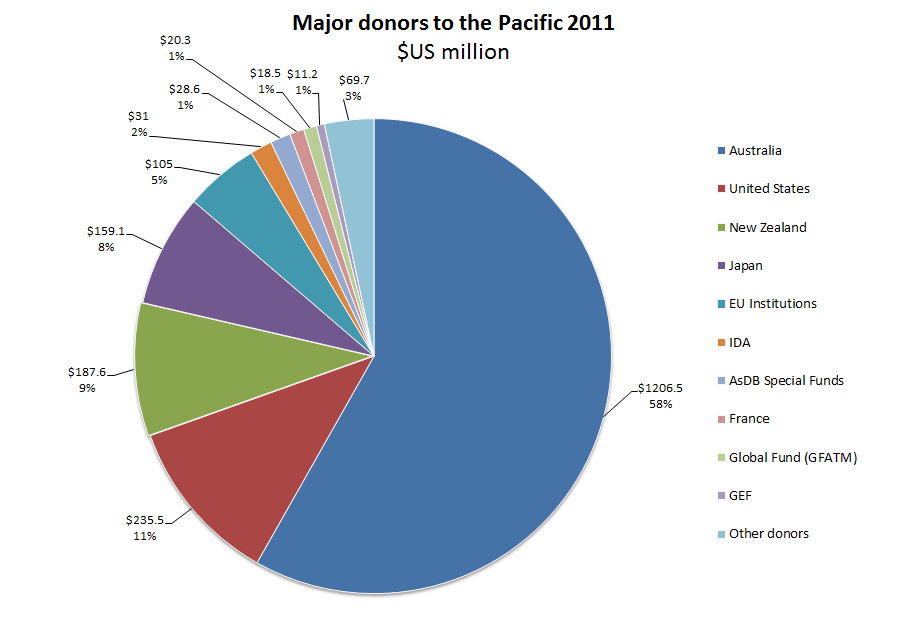 The data presented here is as collected by the OECD. The OECD’s traditional donor club (the DAC) does collect some data on aid from non-DAC members, but it is tiny as a source of aid to the Pacific: just some $3.4 million. The OECD doesn’t collect data on aid from China. The best estimate of Chinese aid to the region is approximately US$850 million from 2006-2011 (roughly $141 million a year, or around 6% of total aid to the region). This would make it a top six donor. Other non-traditional donors active in the Pacific include some Gulf countries, and Indonesia, though the amounts of money involved are probably much smaller. The entry of non-traditional donors not only increases aid volumes directly; it also provides competition and keeps traditional donors engaged with the Pacific.

Non-government aid is also excluded. It is probably also increasing.

Whether this massive increase in aid is a good thing is well beyond the scope of this blog post. It does make it more likely that the Pacific will avoid a doomsday and at least muddle through. But the real point of this post is just to point out how the aid fortunes of the Pacific have turned. These fortunes haven’t been evenly spread. PNG and Micronesia have missed out. But eight of the 14 Pacific island economies have seen their aid increase after inflation by more than 50% over the last decade. For these countries, the last decade has truly been an aid boom.

Read the second in this two part series on aid to the Pacific (focusing on aid dependency) here.