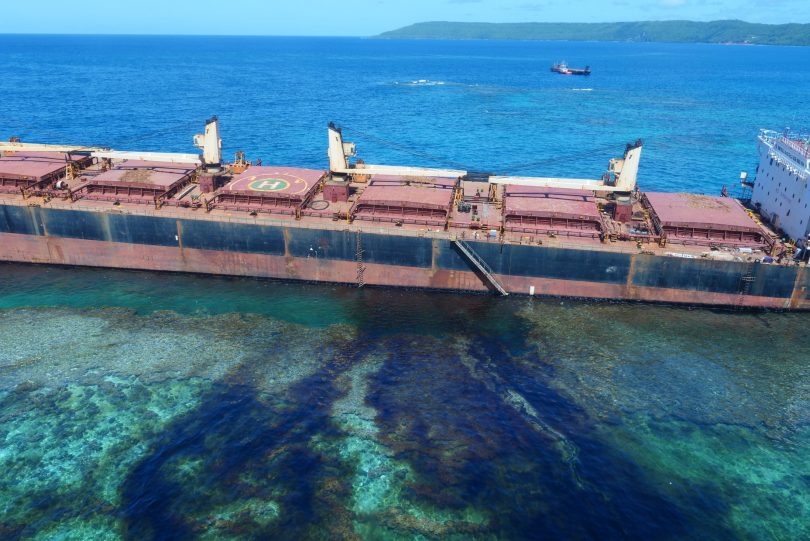 Large scale environmental disasters in developing countries come and go these days with only the faintest of acknowledgement in the industrialised north. Another sip of the morning coffee, a flick of the television remote control or newspaper page, and they are largely forgotten.

Over the last month what authorities fear could be the country’s worst environmental disaster in recent times has been playing out in Solomon Islands. A ship laden with up to 600 tonnes of oil has run aground off the postage-stamp-sized island of Rennell, best known for its biological diversity and for being the largest raised coral atoll in the world. The Hong Kong-owned vessel was collecting the island’s fertile soil, laden with bauxite ore.

It is estimated that anywhere between 60 to 100 tonnes of fuel have now been discharged onto the island’s reef. While precipitated by Cyclone Oma, early indications suggest a flouting of marine safety codes led to the grounding. More spillage is anticipated over the coming days and weeks.

In the midst of a fiercely fought election campaign in Solomon Islands, it could be expected that this calamity would be the focus of the nations’ attention. How did it occur and who is responsible? Instead, not one word about the disaster has been uttered publicly by the country’s politicians who are deep in campaigning mode: not a peep from the Minister for Environment, not a whisper from the Minister of Mines, not a murmur from the Prime Minister. It is notable that the incident has garnered more interest outside of the country. Foreign news coverage has surpassed that of the local media.

Meanwhile, the Indonesian company responsible for mining in Rennell – the company that chartered the stricken ship – continues to load its precious bauxite only a stone’s throw from the listing tanker, seemingly oblivious to the unfolding catastrophe. No one is stopping it.

Outsiders are leading the effort to contain the spill, with Australia at the fore. Australian experts are now on the scene, although the initial slow reaction, the island’s remoteness, the complex logistics and the state of the hapless ship has meant that progress has been excruciatingly slow.

What has transpired in Solomon Islands tells us a number of things about a country that Australia has spent billions propping up over the last fifteen years. The unfolding disaster on Rennell is a perfect case study in rapacious natural resource exploitation, poverty and weak governance. And the deafening silence within Solomon Islands is perversely rational. Solomon Islands’ politics is highly localised: direct relationships of MP-voter patronage dictate everything. It is characterised by widespread corruption, fuelled by the country’s Asian-dominated logging, and now mining, industries. (There is a blurring between the two, as one-time loggers turn their hand to mining.) Political and bureaucratic elites collude with third-rate companies whose definition of corporate social responsibility is to build a public road to a mining site. Environmental laws are disregarded, either deliberately or because public servants lack the ability to enforce them.

Against this backdrop, there are no incentives, indeed, there is no need, for any of Solomon Islands’ 50 fragmented national MPs to worry themselves about a mounting environmental catastrophe which government neglect and malfeasance has contributed to. Not one vote cast at April’s upcoming election will be made on the basis of what is transpiring in Rennell. The vast majority of voters simply have no interest in matters beyond the personal: the provision of corrugated iron roofing, given by a local MP, upon which a similarly gifted cheap solar panel can be affixed. And this too is completely rational given a historical failure of government service delivery and limited livelihood options. At a political level, no one will be held accountable for this disaster.

While oil haemorrhages, the vexed question of how to address the fundamental problems underlying Solomon Islands’ natural resource sector continues to be ignored. And there are zero political repercussions for this; just as there have been none for the national government for foregoing much needed revenue by scrapping all export duties on bauxite in late 2016, and for quietly pulling out of the global standard for governance in minerals, the Extractive Industries Transparency Initiative, last year.

Back on Rennell, the island’s only arable land continues to be scooped up and shipped off-shore. Future generations’ valuable food gardens are vanishing. The trashing of an island once known for its pristine environment is reaching a crescendo, with the destruction of its marine environment now added to the list of woes. Despite this, there will be no change to Solomon Islands handling of its internationally recognised, and dwindling, natural resources. To do so would require the country to change its politics, something no one, neither voters nor elected officials nor donors, is able to do.

A version of this blog first appeared on SBS Dateline.

Daniel Evans is a PhD candidate in the ANU Coral Bell School.