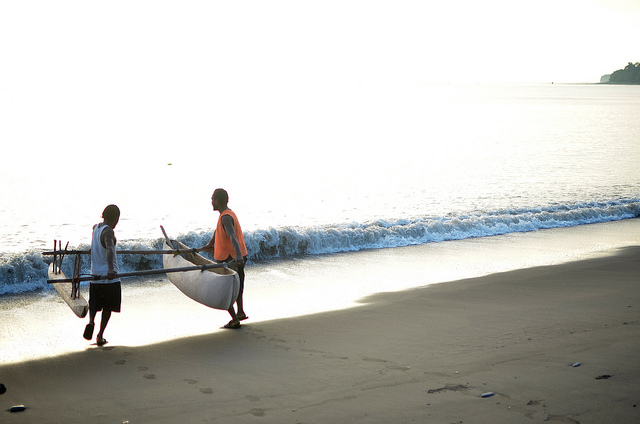 The meeting at which world leaders will agree on the 17 proposed Sustainable Development Goals (SDGs) that will replace the Millennium Development Goals (MDGs) is fast approaching. There has been a flurry of recent commentary regarding the proposed goals, which at this stage are unlikely to change, both around the world and on this blog. There has also been debate between those that are optimistic and those that are pessimistic about the SDGs; groups that Ben Day characterises as Team Bumblebee and Team Chimera.

Here I want to provide some thoughts on what has been said in previous blog posts, with a particular focus on the relevance of these arguments for Pacific island countries (and without reference to the country western music so loved by previous commentators). After all, the Pacific as a region has broadly failed to achieve the MDGs: 10 of the 14 independent Pacific island states did not achieve a majority of the MDGs (excluding MDG 8, which is not focused on countries), and three failed to achieve any. But despite this there is a sense of optimism regarding the SDGs in the region; even in the face of capacity constraints that are likely to limit progress against a long list of targets.

But before discussing the SDGs, let’s reflect on the impact of the MDGs in the Pacific. It is fair to say that the MDGs received a mixed reception in the region. On the one hand, the MDGs were credited with marshalling resources and efforts around a global anti-poverty agenda. There was an increase in aid to the Pacific [pdf], which can partly be attributed to the MDGs, although this was not uniform and was not as significant as the aid boom in sub-Saharan Africa. Many a national development plan in the Pacific refers to the MDGs, meaning that in practice, even if MDG targets were not achieved in the Pacific, the MDGs took on normative aspirational value (as Terence Wood has outlined, and a point to which I’ll return).

On the other hand, the MDGs were rightly criticised for having been drafted by UN officials without input from the region. Derek Brien from the Pacific Institute of Public Policy argued that as a result, the MDGs were “aimed primarily at sub-Saharan Africa, but applied to all developing countries.” The MDGs failed to include issues of great importance to the region, such as climate change. Their focus on international poverty lines did little to inform poverty alleviation in the Pacific.

The drafting of the SDGs has been a far more inclusive process, involving extensive consultation in all regions of the world, including the Pacific. A wide group of stakeholders, which includes civil society and the private sector, has also participated in their formulation. Small Island Developing States (SIDS) are referred to explicitly on a number of occasions in the goals – a reflection of this participation, and the sheer number of SIDS in the United Nations (where Tuvalu’s vote is equal to that of Australia). This is a great outcome for SIDS, and no doubt will lead to better recognition of the special challenges that they face in other fora (such as recent recognition in the Addis Ababa Action Agenda). Issues of importance to Pacific island countries, including combatting climate change and sustainable use of ocean resources, are SDGs in themselves (goals 13 and 14 respectively).

More broadly, the result of extensive consultation is a vast set of interrelated goals, targets, and indicators. There is also a list of ‘means of implementation’ that follows the SDGs.

Pessimists argue that the list is unmanageable. The Economist has said that, “a set of 169 commandments means, in practice, no priorities at all.” Ben Day argues that the failure to make choices about what should be excluded from the SDGs will ultimately undermine their ability to provide focus. (Ben uses a brilliant example of corporate speak to, dare I say, articulate this). Bill Easterly, in an interview, makes a similar point.

There are some interesting parallels here with the now defunct Pacific Plan for Regional Integration and Cooperation (the Pacific Plan). The Pacific Plan was criticised last year when reviewed by a high-level panel of experts on the basis that the plan “has so many priorities, and is so broadly framed, that it effectively has no priorities.” However, the comparison ends there. The Pacific Plan failed to manage submissions from vested interests (the CROP agencies); however, it also failed to be truly inclusive, with civil society effectively excluded from the regionalism agenda. The same cannot be said of the SDGs.

Optimists on the other hand welcome the breadth and complexity of the SDGs. Joy Kyriacou and Derek Brien, for example, argue in their respective blog posts (here and here) that development itself is complex, and that the SDGs must reflect that complexity if they are to be transformative. The text that precedes the list of 17 goals is inspiring, whatever our criticism of the SDGs themselves.

I’m of the view that the SDGs could be simplified, even while acknowledging the complexity of development and welcoming the more inclusive way in which the goals were formulated. The current draft list of SDGs does a poor job of differentiating end goals (or outcomes) from means; outcomes such as ending poverty and hunger sitting alongside SDGs focused on infrastructure, industrialisation and access to modern energy (i.e., means to ends, rather than ends in themselves). The MDGs did better in this respect (with the exception of MDG 8).

The targets that sit under the SDGs could also be refined. Some of the detail, I feel, is unnecessary (“road traffic accidents” – in a high level document?). Some is odd (“significantly raise industry’s share of employment and GDP” – really? Even in SIDS?). In other cases, targets are vague. See, for instance, target 12.8: “By 2030, ensure that people everywhere have the relevant information and awareness for sustainable development and lifestyles in harmony with nature.”

But does this breadth and complexity undermine the ability of the SDGs to achieve their purpose?

Here I think it is important to be realistic about what the SDGs are likely to achieve. To the extent that the SDGs are supposed to guide domestic decision-making by government, the current draft list of indicators and targets is problematic. This is especially evident in the Pacific, where small government bureaucracies cannot seriously be expected to measure progress against 169 targets, much less establish and implement policies designed to achieve them.

I’m not convinced this is a big problem. Domestic policy formation is primarily a national endeavour, and we should be realistic about the extent to which it can be influenced by global exercises like the MDGs and the SDGs. The main benefit of exercises like the SDGs, in my view, is the articulation of a normative ‘vision’ of what international civil society should work toward (a benefit that Terence Wood also pointed to in an earlier blog post). This can influence (foreign) aid policy, but is less likely to directly influence domestic policy – a point demonstrated by Andy Sumner and Charles Kenny’s review of the MDGs.

The current draft list of SDGs does a good job of articulating this normative vision, even if the list of goals, targets and indicators could be refined. For the Pacific, the issues that matter to the region have been incorporated into the SDGs, as has acknowledgement of their special circumstances. I believe that this outweighs the implementation problems associated with a long list of priorities. There is a lot in the SDGs that the region can be pleased about.