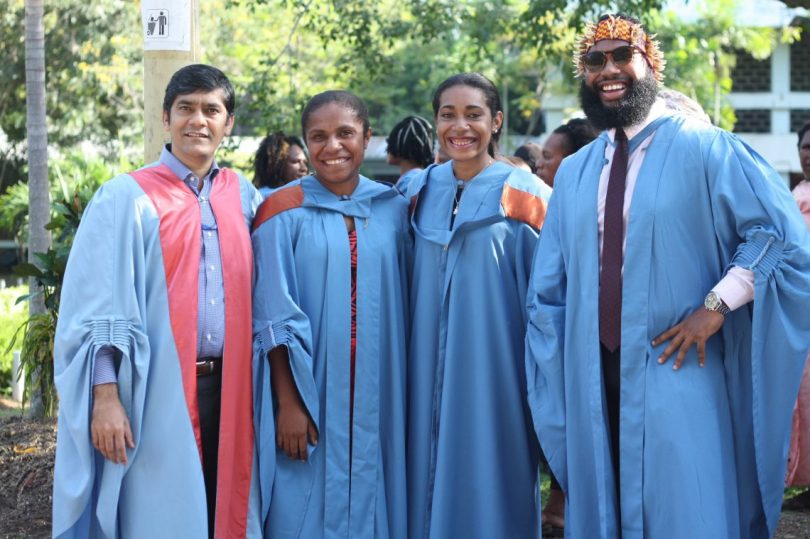 In 2015, final-year economics students at the University of Papua New Guinea (UPNG) were surveyed as they completed their studies (blog here and report here). In 2017 and 2020, I ran the surveys a year or so after their completion of studies (2017 blog here and report here). The full report of the latest survey can be found here. This blog summarises some of the findings on employment outcomes.

Generally, the results for 2020 are similar to those in 2017. Both surveys found that between 60% and 70% of students had found a job in the formal sector one year on from their completion of studies. Another 20% were looking for work. And another 10% were not in the formal sector (either undertaking further study, working in the informal labour market, or living in the village). 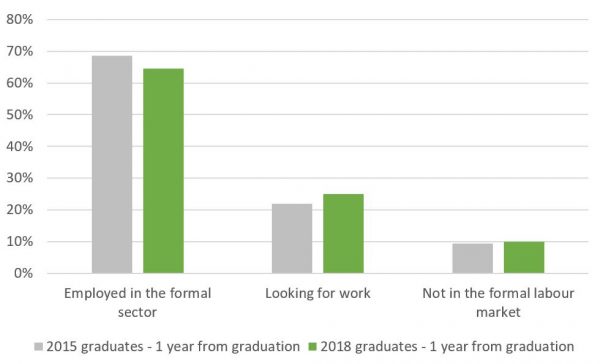 The good news is that most who responded had found jobs. Many were working for prestigious government departments or private organisations.

The sobering news is that one in five respondents were looking for work more than a year after completing their studies. The survey was run online, and clearly those who have better access to the internet (e.g., at work), and are more successful in their careers, are more likely to respond. Almost everyone who responded was in Port Moresby, with a couple in Lae and Madang. This means that the results will likely be skewed to more positive employment outcomes.

Bearing this in mind, the employment rate for UPNG graduates a year after graduation is probably closer to 50% than 70%.

Private formal sector employment has been in decline for the last several years, and a higher percentage of new graduates were in government jobs in 2020 than 2018. There is also evidence presented in the main report that the 2018 students had to write more applications to get a job than the 2015 cohort. There is also now COVID-19, though the 2020 survey was largely completed before COVID-19 hit. Four 2018 graduates responded to the survey after the onset of the pandemic: two were employed, two unemployed; of those unemployed, one lost their position due to the pandemic.

Taken together, the results from both the 2017 and the 2020 survey suggest that the labour market does not have a large absorptive capacity for economics graduates. It might be the case that students are finding work in the informal sector, though we do not have evidence of this. And if UPNG economics graduates are struggling to find a job, then think how much harder it must be for students from other less prestigious degree programs and universities.

These findings support a strategy for a focus on education quality rather than quantity, as recommended by the Garnaut-Namaliu report on tertiary education. University education is not the only route to success. It is not useful either for graduates or employers to have more students in universities if there are not enough jobs. It is better to ensure that those who are selected get better trained.

More research like this is needed, with surveys that track the employment fortunes of graduating students from a range of disciplines and universities.