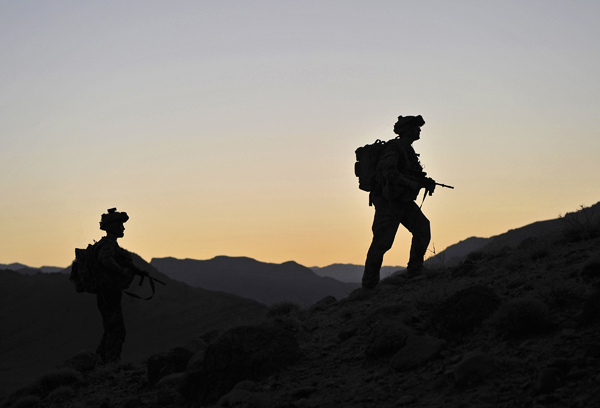 As a supporter of aid, it’s difficult not to feel a bit disgruntled by headlines that trumpet growth in Australian defence spending – an investment of some $50 billion to build Australia’s next submarine fleet being the latest example. And I’m certainly not the only one to feel this way.

But equally we know from our research on public opinion on aid that the Australian public often vastly over- and under-estimates how much the government spends in different areas. So is my disgruntlement justified? How much does Australia actually spend on defence as compared to foreign aid? And how does our spending in these areas compare to that of other countries?

Last month’s Federal Budget announced $3.8 billion will be spent on ODA and $32.3 billion on defence in 2016-17. The chart below shows Australia’s Defence and ODA budgets as a percentage of federal expenditure over a twenty year period, including forward estimates to 2019-20. 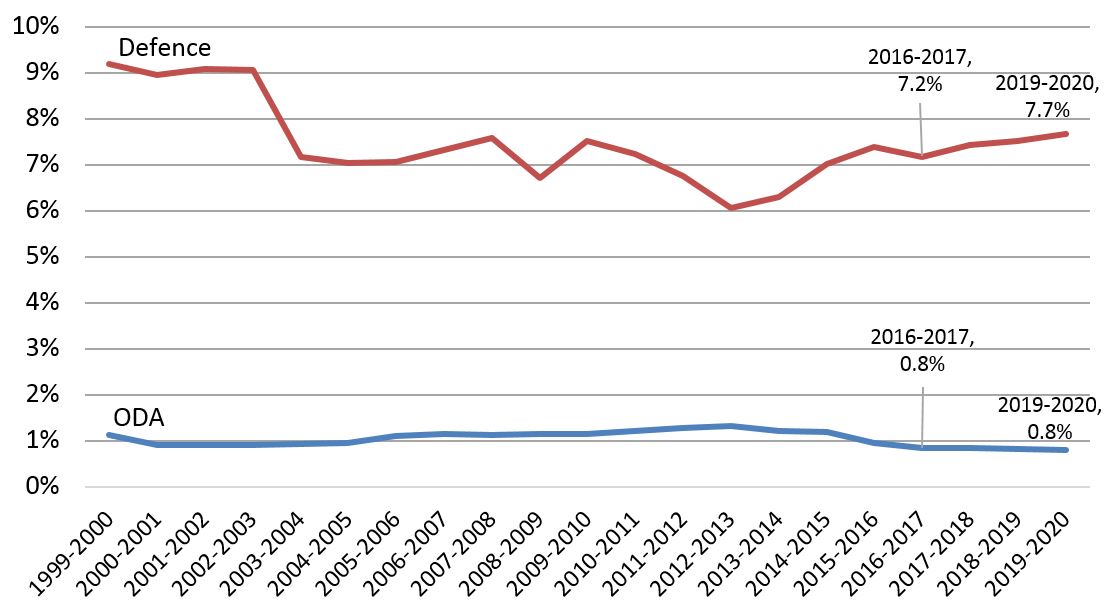 Defence spending is clearly on the increase, and is projected to be so for some time. Aid, on the other hand, is projected to continue on a downward trend as a percentage of GNI, and remain flat as a percentage of government expenditure, for several years to come, even in the event that the Australian Labor Party forms government in July, as my colleague Robin discussed in a recent blog.

Defence and aid do share one interesting characteristic: both have had bipartisan spending targets attached to them in recent years — 0.5% of GNI for aid, and 2% of GDP for defence. However, the fortunes of these two targets have fared rather differently. While the aid target has been effectively abandoned, the Defence White Paper released earlier this year includes a new 10 year funding model which sees the Defence budget growing to $42.4 billion by 2020-21 – reaching the 2% of GDP target based on current projections. The big innovation here was the decoupling of this target from changes in GDP forecasts. Moreover, the White Paper funding projections see Australia’s defence budget not only reaching the 2021-22 2% target of $42.4b but continuing to increase, apparently at or above projected nominal GDP growth. The defence sector’s attitude to the target is reflected in ASPI’s recent analysis of strategic choices for the incoming government, which advocates that the 2% GDP defence target might be better regarded not an “aspirational ceiling” but a “mandatory floor”. 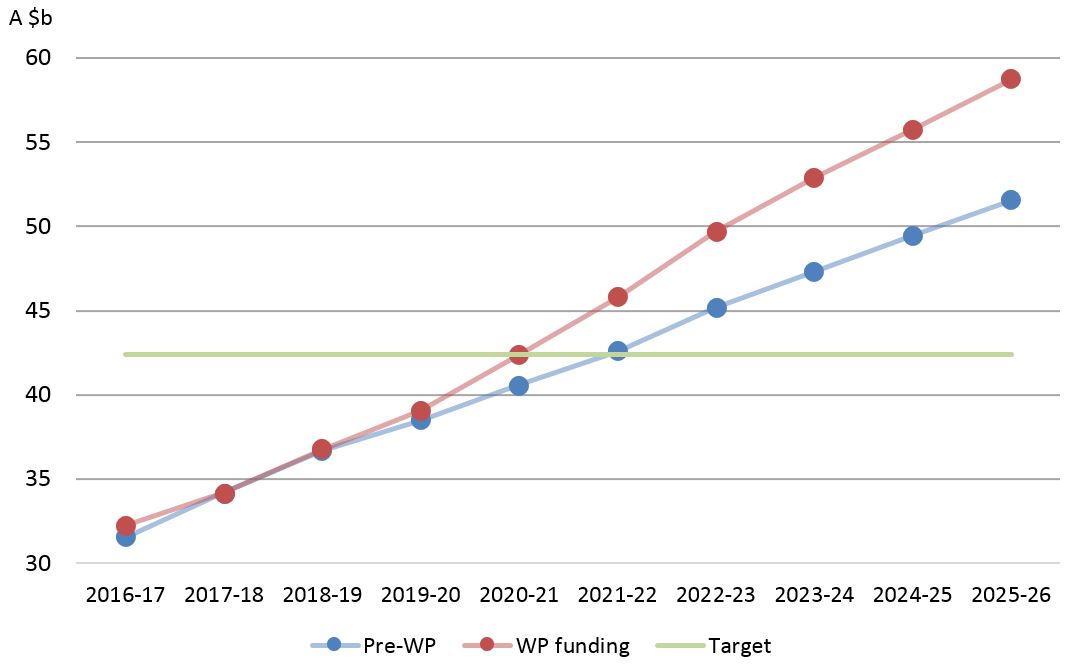 How do our current spending levels on defence and aid compare to other countries? While it’s difficult to project forward for countries other than Australia, the SIPRI Military Expenditure Database allows a retrospective comparison. Compared to nine other countries of interest, plus the OECD DAC, Australia’s military spending as a percentage of GDP has steadily moved above the DAC average and median figures. Australians are well-accustomed to comparing themselves to the British, so it is worth noting that 2015 figures show Australia and the United Kingdom (and, interestingly, China) sitting side by side when it comes to their military expenditure as percentage of GDP (NB SIPRI’s definition of ‘military expenditure’ encompasses more than just the Defence budget – hence the data showing that Australia is already spending 2% of GDP).

Military expenditure as % of GDP 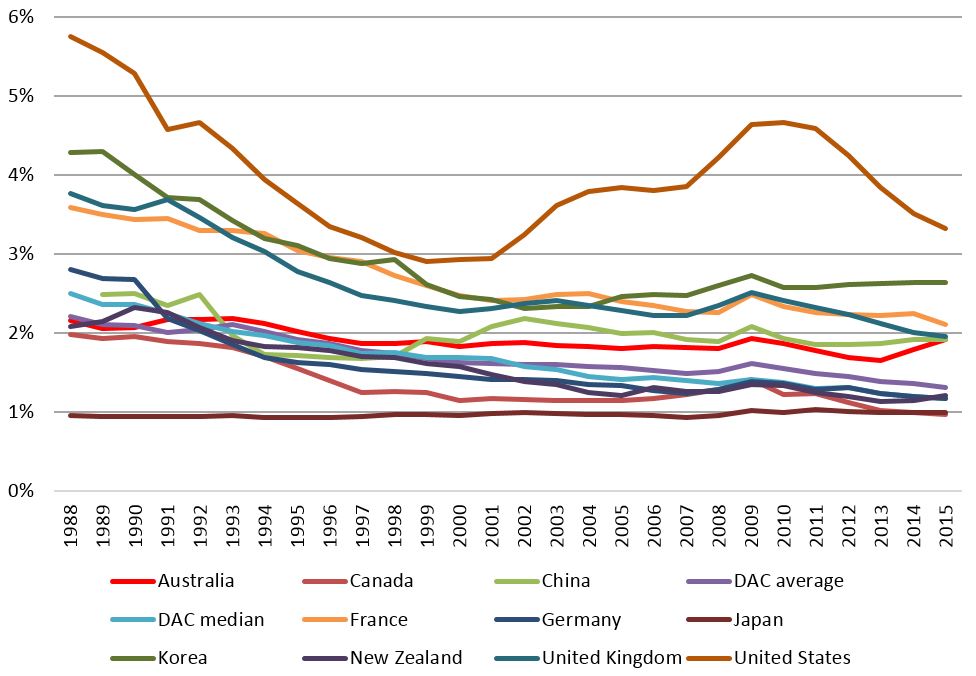 When it comes to relative spending on aid and the military, however, there’s a clear divergence. The figure below graphs the ratio of military-to-ODA spending by the UK and Australia over the last 20 years. Whereas Britain’s military once vastly outspent Australia, the ratio has for the most part dropped and then plunged last year with the adoption of legislation that commits the UK to giving 0.7% of GNI to aid. 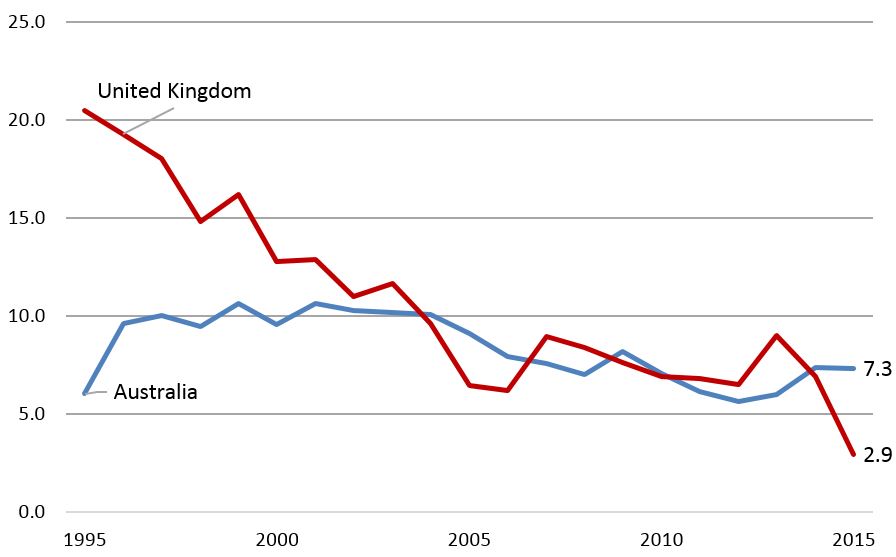 Source: Own calculations (military expenditure/ODA) based on data from OECD.Stat and SIPRI Military Expenditure Database 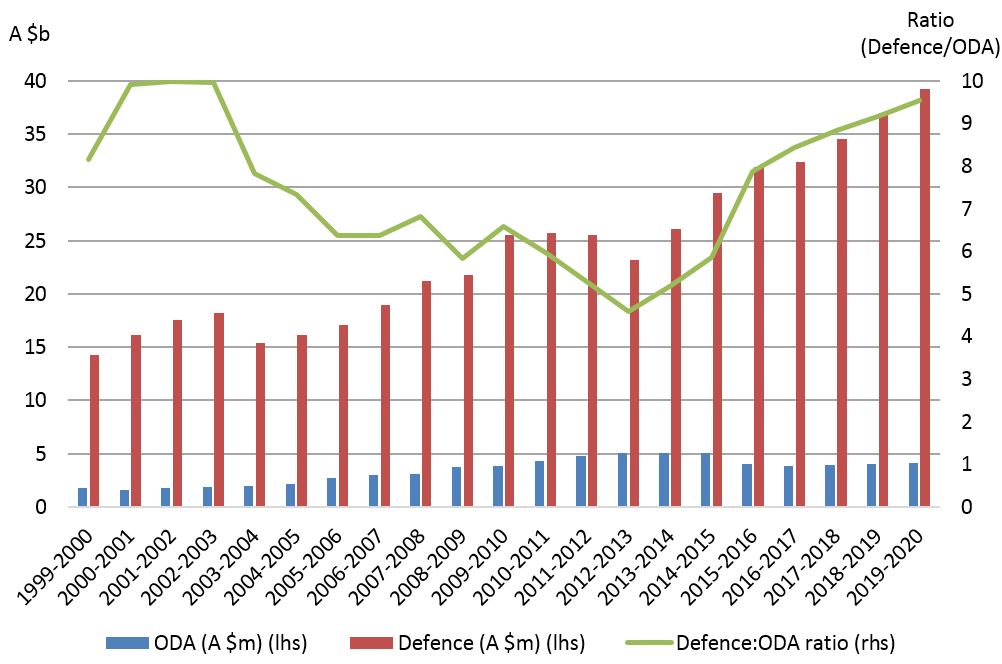 At the height of the aid scale-up, critics complained that Australia was becoming “an aid powerhouse” but “a military minnow.” Now the tables have well and truly turned.

It has been noted on this blog before that the Coalition cuts to aid have almost completely reversed the earlier scale-up of aid. What the figure above shows is that the government is also reverting to a pre-scale-up “defence first” policy. We spent $10 on defence for every $1 on aid at the turn of the century. That got down to as low as $5 in 2012, but we’ll be almost back up to $10 by 2020.

Is this a balanced approach? Does a defence-first policy make strategic sense? Aid advocates have a right to be disgruntled, and perhaps should join the debate not only on fiscal policy but also on defence.

Thanks to Anthony Swan (Research Fellow at the Development Policy Centre) for assistance with Defence data.