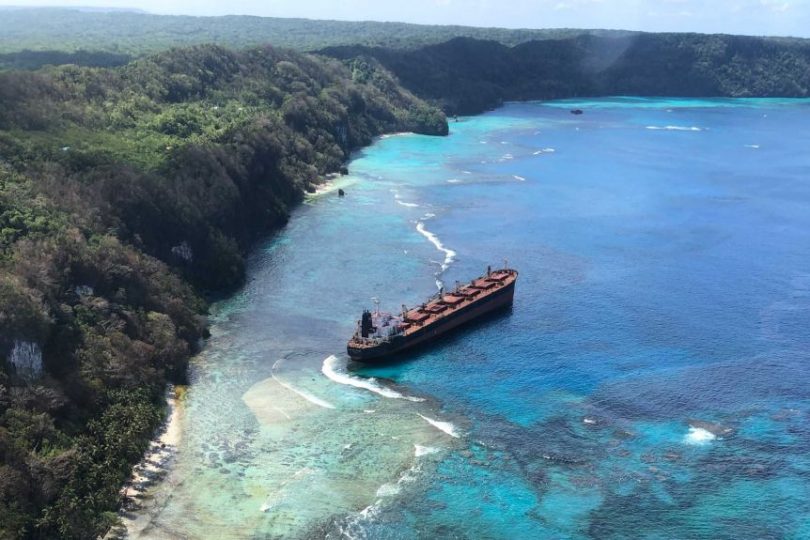 The Guardian provided considerable coverage (here; here; here; here). The New York Times investigated (see here and here). Then-Solomon Islands Prime Minister Rick Hou admitted that tax concessions to the bauxite miner meant that the nation gained no revenue from the mining operations at all and that the mining lease was granted without “proper procedures being followed”. PM Hou – likely sensitive to negative international attention – also promised full reviews and possible revocation of the mining lease. However, this did not happen, and mining continued business as usual (although for the last month a dispute between the company and landowners has paused operations; likely to be temporary).

Daniel Evans, for Devpolicy, provided analysis on the stranding and subsequent events – noting that the environmental disaster in Rennell was a “perfect case study in rapacious natural resource exploitation, poverty and weak governance”.

I visited Rennell in late 2015 while working for the New Zealand Ministry of Foreign Affairs and Trade (MFAT). As I later reported on and reflected for Devpolicy, Rennell left a lasting impression on me. As a Polynesian island in a predominantly Melanesian state, links to New Zealand were strong (the Rennellese language is related to Te Reo Māori; people greet nose-to-nose; rugby union is very clearly the first sporting love). The tensions and divisions on the island from environmentally destructive logging and mining were also stark. And the East Rennell World Heritage Site – the first World Heritage Site in the independent Pacific states and the first site globally under customary ownership and management – had recently been placed on UNESCO’s blacklist of World Heritage in Danger given threats from logging and mining, invasive species, and climate change.

In 2015, UNESCO supported the Solomon Islands Government (SIG) to prepare a road map to remove East Rennell from the World Heritage in Danger list: the Desired State of Conservation for East Rennell (DSOCR). In a recent article for Asia & the Pacific Policy Studies I investigate progress, opportunities and challenges associated with the DSOCR.

This action plan calls for the government to: (i) manage mining and logging in West Rennell so the “Outstanding Universal Value” of East Rennell is not affected; (ii) minimise the risks from invasive species including rats, Giant African Snails, and coconut rhinoceros beetle; (iii) promote the sustainable harvesting of important marine species such as coconut crab and Trochus; and (iv) improve the site’s management through the finalisation and adoption of a management plan.

Notably, the DSOCR also calls for East Rennell to be included under the Protected Areas Act, a significant addition to Solomon Islands’ environmental legislation when introduced in 2010. That is a worthy goal, and one that SIG is currently exploring through ongoing consultation with East Rennell landowners. However, this process is likely to be extremely lengthy, indeed ultimately impossible, given the legislation requires the support of all landowners – a group that is currently highly fractured between those that support conservation intentions, those that are frustrated from a lack of economic benefit from heritage listing, and those with links to logging and mining interests.

Overall, progress has been minimal and it is extremely unlikely that the DSOCR’s goals will be achieved by the target date of 2021. Consequently, East Rennell looks likely to stay on UNESCO’s list of World Heritage in Danger.

The reality is that the East Rennellese have just not benefited from the World Heritage inscription. At the time of listing in 1998 there was much optimism around tourism in particular. However – stymied by extreme remoteness and the ethnic tension period – tourist arrivals have remained a trickle. Indeed, I suspect that East Rennell is one the world’s least visited World Heritage Sites. All small-scale tourism and other livelihood interventions supported by donors and NGOs have failed. Frustration among East Rennellese prevails.

What realistically can be achieved? There are no easy solutions. Telecommunications finally arrived with the installation of 3G cellular technology in April this year; that is a start to better connect East Rennell. Efforts to increase legal protection through inclusion in the Protected Areas Act, despite the likely difficulties, should probably continue. Innovative methods of returning benefit and income to East Rennellese like the Forest Carbon Partnership Facility (REDD+) should be explored, and I understand initial conversations have started.

The East Rennell World Heritage site holds significant natural heritage value – although due to extreme remoteness will never receive significant amounts of tourists. And as I conclude for Asia & the Pacific Policy Studies, the Rennell case highlights the complexities of World Heritage protection in the Pacific – a context of scattered remote islands, customary ownership and management of land and other resources, limited government capacity and resources, and competing priorities that downgrade heritage protection.

Ultimately, the success or otherwise of the DSOCR, and the continuing protection of East Rennell’s Outstanding Universal Value, will largely rely on whether East Rennell landowners continue to support conservation efforts and ideals. Their views, concerns, and livelihood aspirations cannot be ignored.

This piece is based on the author’s article in Asia & the Pacific Policy Studies journal, “Achieving the desired state of conservation for East Rennell, Solomon Islands: progress, opportunities and challenges”. All articles in the journal are free to read and download.