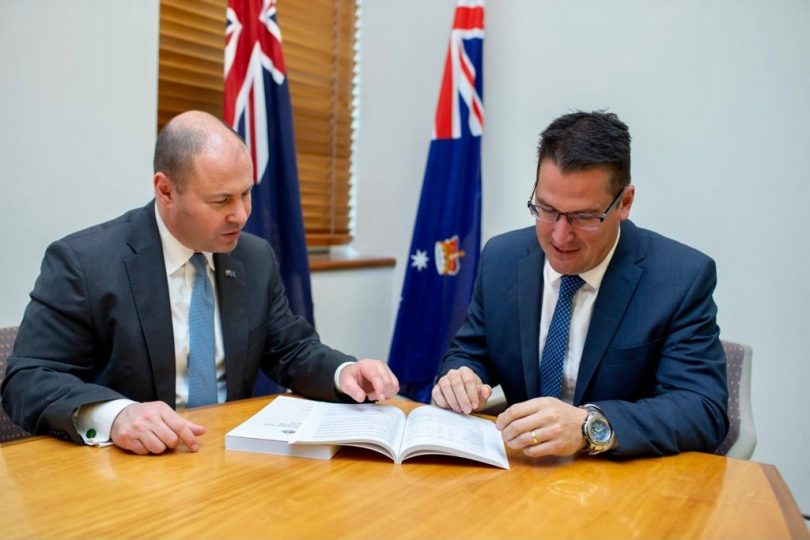 Kudos to Sky News journalist Kieran Gilbert who, in the follow-up to last week’s budget, put questions on foreign aid to all three of the Prime Minister, the Treasurer and the Minister for International Development.

The Prime Minister got just one question, about why we are cutting aid. In reply he insisted that “we continue to increase our support”.

If the minister for aid can’t actually say what the aid budget is, something has gone wrong. It is hard to understand, but it seems to be part of a strategy to avoid any permanent increase in development assistance.

Seselja wouldn’t be drawn on how much we are actually spending on aid, but was, like his boss, keen to deny there had been a cut. I ran through the numbers on my budget night blog, and here they are again in the figure below, starting with the last non-Coalition aid budget from 2012-13. These are official numbers, adjusted by official CPI estimates and projections. The numbers are actuals up to 2019-20 and budget numbers thereafter, including forward estimates.

There is an increase in the 2020-21 year (for which I was the first to give the government credit), and aid then falls every year for the next four. 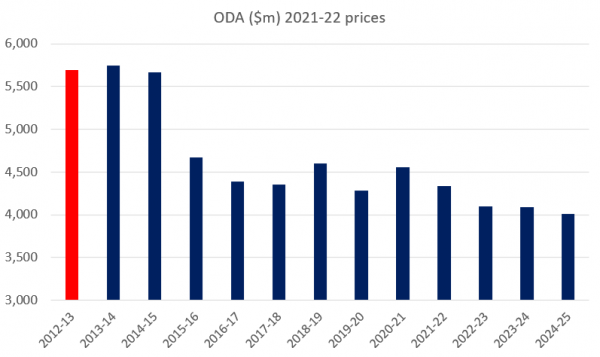 As I wrote in my budget blog this year and as the Minister emphasised in his interview, aid is falling next year in part because the government is planning to spend more of its COVID response package this year and so less next. But the aid cuts story is about the next four years. Aid falls in each of them. Looking at the figure above, there is no other way to interpret last week’s aid budget other than as a cut in foreign aid in the middle of a pandemic.

Australia’s foreign aid and domestic spending: a study in contrasts 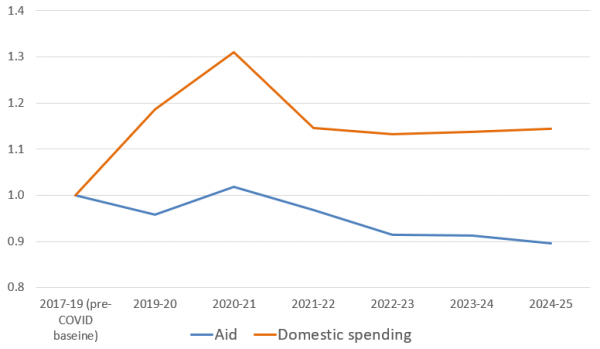 Both figures set equal to 1 for their average in 2017-18 and 2018-19 (pre-COVID average). Domestic spending is total spending minus aid minus interest. Figures are adjusted for inflation.

Seselja was also at pains in his interview to dispute the significance of the recent OECD finding that our aid to GNI ratio was 0.19% in 2020.

As I mentioned in my blog on the latest OECD numbers, the OECD calculates aid to GNI (or national generosity) ratios on a calendar year basis, whereas Australia budgets July to June. Australia spent 11% less in calendar year 2020 than calendar year 2019 (pre-COVID). According to the OECD – based on information that must have come from Australia – the reason was “slowed spending as a result of the pandemic”.

Sky gave aid much better coverage post-budget than the ABC. As far as I know, the ABC only interviewed the Minister for International Development about aid on Pacific Beat. The ABC seems to have assigned its coverage of aid to Pacific Beat. That’s unfortunate, because the aid budget these days is always kind to the Pacific. But even now, only about one-third of aid goes to the Pacific. A more global perspective is needed.

The government should be asked a lot more questions about foreign aid. Our share in the international aid effort has more than halved in the last decade. We have gone from being a donor of above-average generosity to being one of the least average donors. We are planning to spend less aid every year for the next four. And – strange but true – the government refuses to say how much we are actually spending on aid.

Good on Sky for trying to get some response from government ministers on these important points. I hope that the ABC and others will follow suit.

Check out all the latest aid numbers at the Australian Aid Tracker.