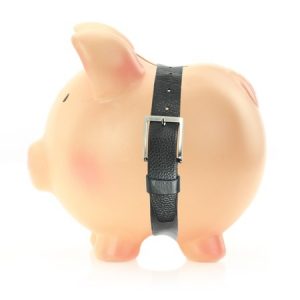 Australia’s 2017-18 aid budget was a dull affair.[1] In all the circumstances, that’s good news and good news is generally no news. End of story? No, not if we follow the story further back in time.

The apparent stabilisation represented by the 2017-18 budget invites an examination of changes in the composition of Australia’s aid program over the course of the five aid budgets brought down under the Abbott and Turnbull Coalition governments.[2]

My own such examination, summarised here, reveals some noteworthy changes. And it suggests that, broadly speaking, political considerations have gained a lot of ground.

A policy brief on which I recently collaborated with Bob McMullan discussed changes in the fine-grained sectoral composition of Australia’s aid program over time, based on OECD activity-level data up to 2015. The present post does something different. It takes a broader look at shifts in the allocation of funds to countries and organisations based on the actual structure of Australia’s aid budget, which has been quite consistent over time. It takes Labor’s last fully-implemented budget, that of 2012-13, as a baseline and considers allocations in the 2017-18 budget relative to it.

I find it natural to group the various elements of Australia’s aid budget into ten main building blocks.[3] These are shown in Figure 1, together with their share of the aid program in the baseline year and in the 2017-18 budget. By looking in the first instance at shares rather than absolute dollars, it is easier to perceive relative priorities without being distracted by budget cuts. 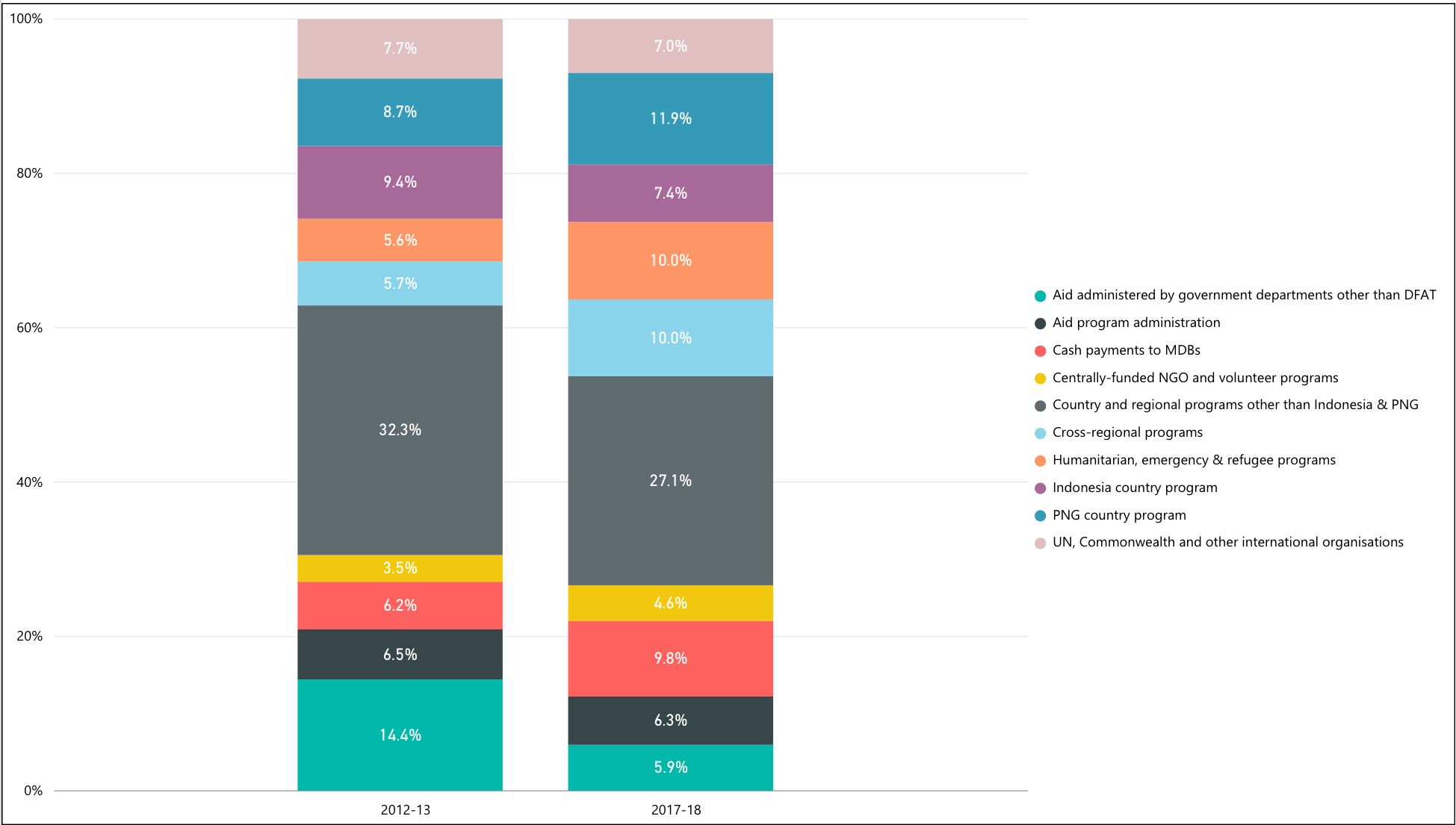 In aggregate, the magnitude of the shift in relative priorities from 2012-13 to 2017-18 is about 17 percentage points, which is substantial.[4] The shift has principally benefited humanitarian, emergency and refugee programs, cross-regional programs, the multilateral development banks and Papua New Guinea, in that order. These programs have been able to increase their share of the pie mainly as a result of reductions in the shares allocated to government departments other than the Department of Foreign Affairs and Trade (DFAT), and to unprotected country programs.

It’s worth noting that aid program administration accounts for about the same share of aid in 2017-18 as it did in the baseline year, around 6%. On the face of it, this would suggest that no significant, net efficiencies have been gained as a result of the integration of the former Australian Agency for International Development into DFAT.[5]

For the record, Figure 2 shows the absolute dollar amounts allocated each of the building blocks in the baseline year and in the 2017-18 budget, in current prices. 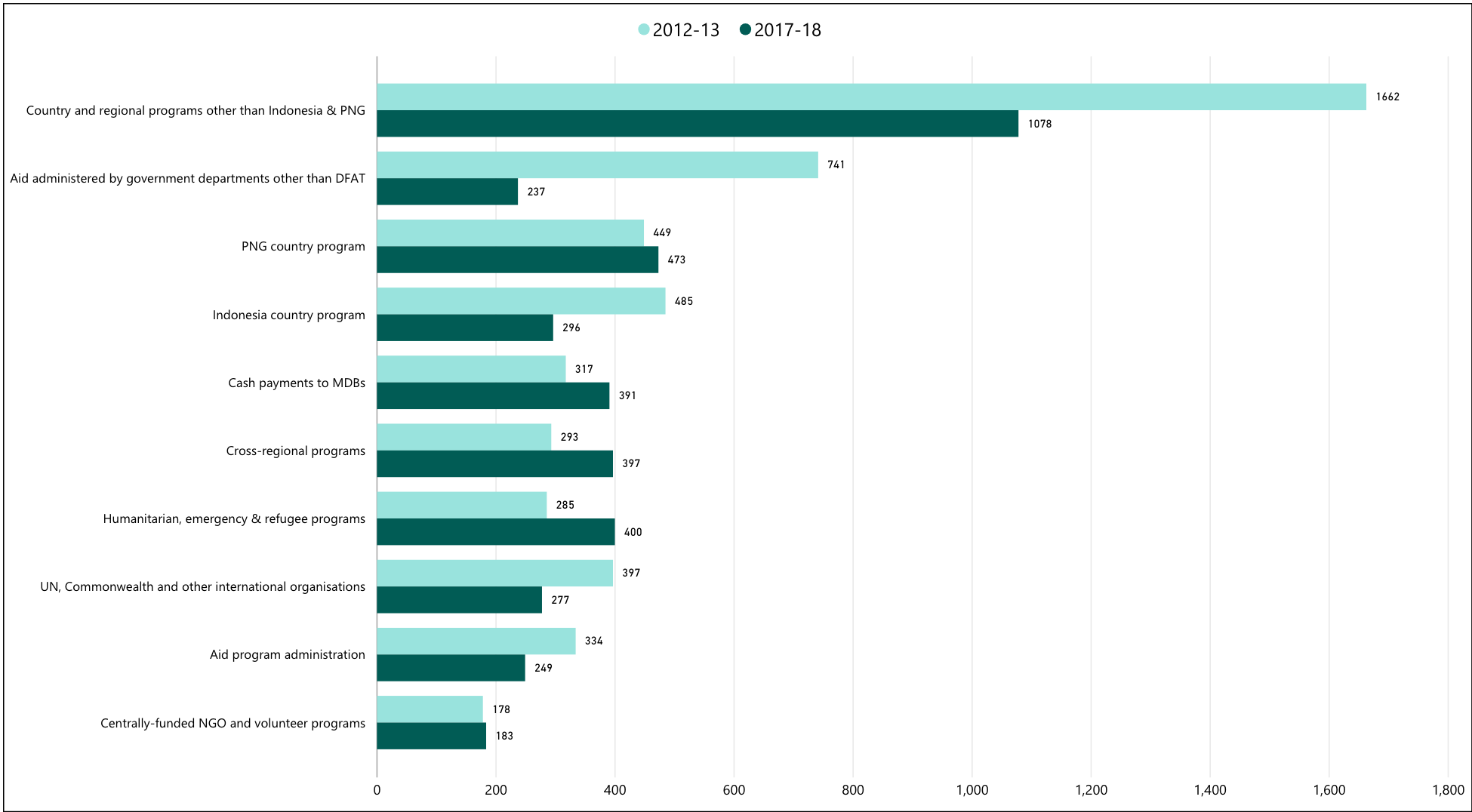 Because aid volume in 2017-18 will be $1.2 billion less than in it was 2012-13, in nominal terms, the share changes shown in Figure 1 translate into a lot less money, or else not much more money, when one looks at the dollar amounts in Figure 2. For example, while centrally-funded NGO and volunteer programs grew from 3.5% to 4.6% of the aid budget, the dollar amount increased by only $5 million in nominal terms.[6]

The main shifts in the allocation of aid to countries are already well known to most observers of the Australian aid program: aid to African countries has been heavily cut, Papua New Guinea, the Pacific island countries and Timor-Leste have been protected, and most other countries’ aid is down by anywhere between one-third and one-half. Figure 3 details the specific changes relative to the baseline year for all but smallest country programs.[7] 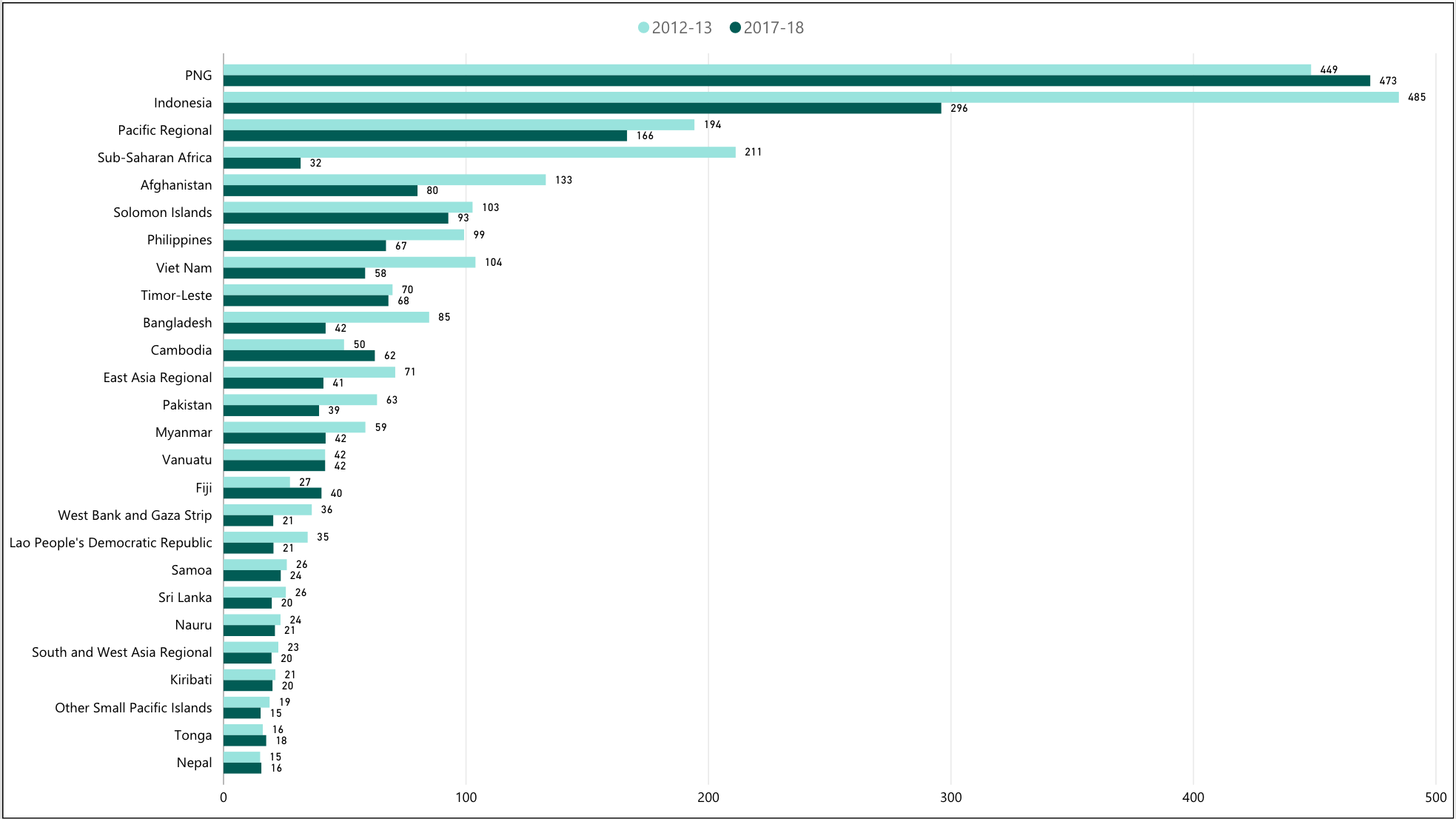 Sub-Saharan Africa is an outlier, down 85% across all countries. Cambodia and Nepal have escaped the cuts imposed on other Asian countries, which were generally above 40% in cumulative terms, thanks to a refugee resettlement agreement and an earthquake, respectively. Fiji, while down a little relative to last year, is up 48% relative to the baseline year, thanks in part to Cyclone Winston.[8]

The government generally applied a uniform 40% cut to unprotected country programs in the 2015-16 budget, which reduced aid by $1 billion or one-fifth in a single year. The circumstances of Australia’s partner countries, however, are obviously far from uniform. Some of the countries affected are conventionally considered fragile. Some are so stubbornly fragile that they also figure among the Least-Developed Countries (LDCs).

Among the unprotected countries, six are both fragile and substantial recipients of Australian aid: Afghanistan, Bangladesh, Laos, Myanmar, Pakistan and (not precisely a country) the Palestinian Territories. The first four are also LDCs. Figure 4 highlights how these six recipients have fared, and also how budget reductions have affected allocations to several wider groupings of vulnerable countries. 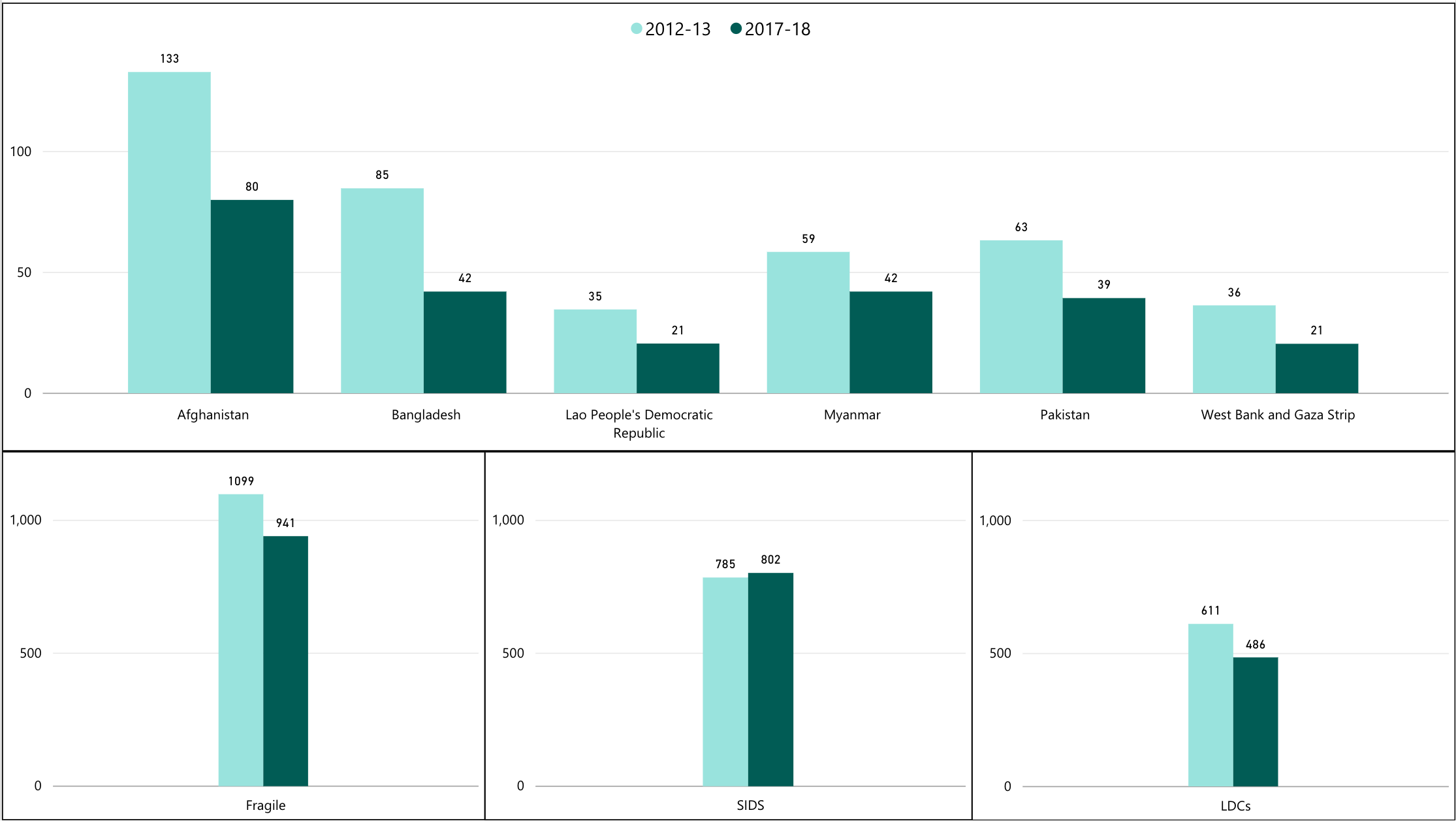 Four of the six fragile countries featured above each lost around 40% of their Australian aid, while Bangladesh lost 50% and Myanmar 30%. While the impact on some of these countries must have been considerable, Australia’s overall support for fragile states did not fall very dramatically because all the protected countries, including Papua New Guinea, fall into that category.[9] Australia’s support for Least-Developed Countries, however, fell by some 20%.

Australia’s support for Small Island Developing States (SIDS) actually increased a little, because both Papua New Guinea and Fiji fall into that category. In fact, SIDS will account for about half of Australia’s country aid in 2017-18, and Australia has been the world’s largest bilateral donor to this grouping since 2012 (and for 14 of the last 16 years).[10]

The fortunes of the programs on the ‘global’ side of the aid budget have been very mixed. At first glance, it seems international organisations have done reasonably well in a context of large aid cuts. However, that turns out to be true only of the multilateral development banks and the global health funds. Figure 5 details the changes, line by line. 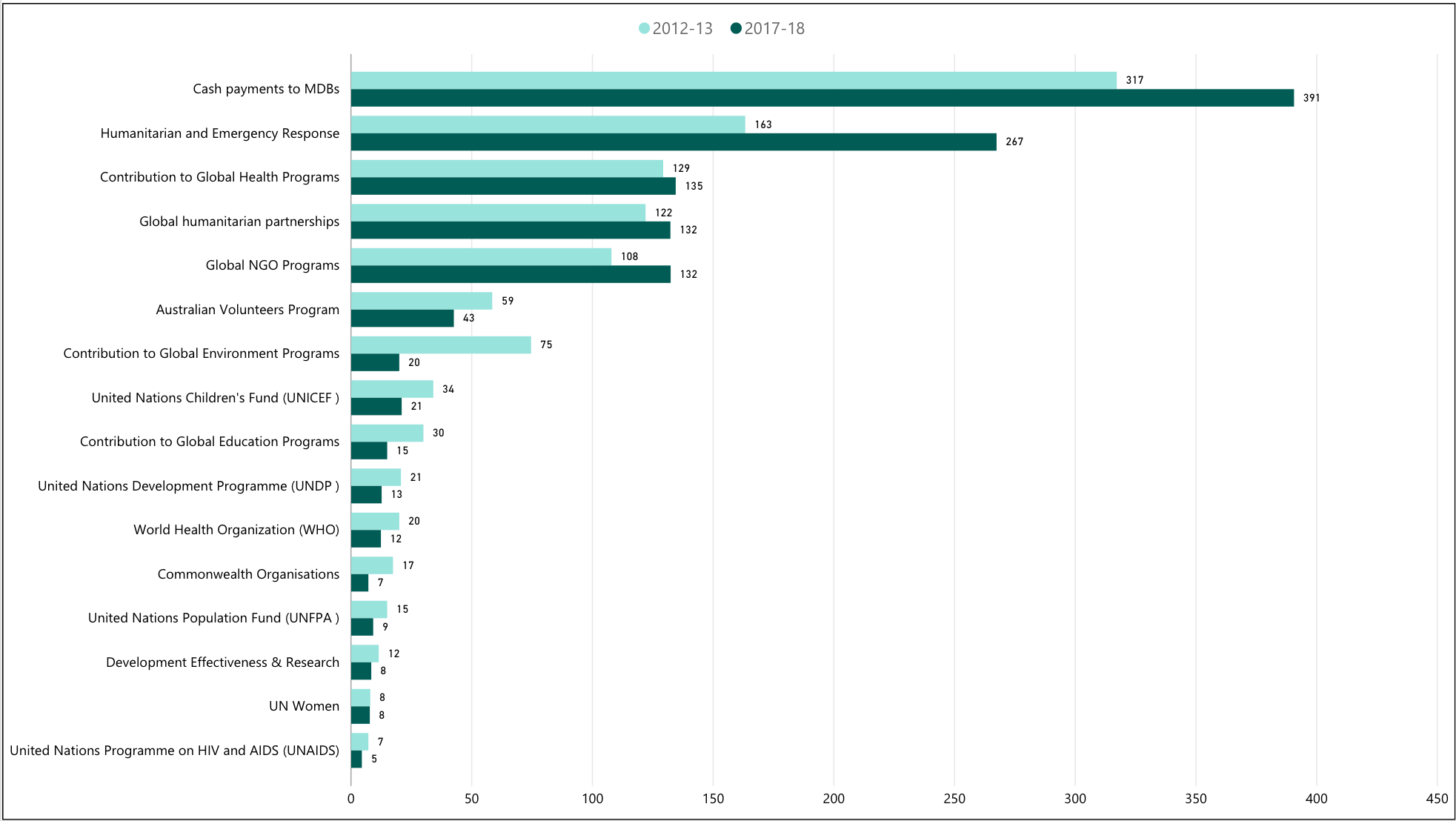 The large increase in funding for humanitarian, emergency and refugee programs which was seen in Figure 2 has not translated into increases in core funding for the relevant international organisations.[11] Those organisations, which are supported under the ‘global humanitarian partnerships’ heading, are receiving only a little more in nominal terms than they were in the baseline year. They might in the end handle much of the additional funding that sits on the ‘humanitarian and emergency’ response line, but will have little flexibility in how they do so. Much of that funding is likely to be allocated to specific priorities associated with the government’s large, multi-year commitments to Syria and Iraq.

Other UN development organisations, aside from UN Women, are all down by about the canonical 40%, having missed out on the protection afforded to humanitarian organisations—this despite the fact that the UN Children’s Fund, the UN Population Fund, the World Health Organisation and the UN Development Programme are constantly expected to play substantial roles in emergency and humanitarian situations. (It’s harder to remonstrate about the drop in funding for the Commonwealth Secretariat.)

Reviewing these changes in the shape of Australia’s aid program after five lean years, it is hard not to be struck by the growing dominance of broadly political considerations in aid allocation. Of course, politics always figures in bilateral aid; it would be foolish to expect otherwise. In fact, aid often does well to act as a servant to politics in circumscribed ways.

But, over the past five years, something more than that has been happening. We have seen bilateral aid cuts implemented seemingly without regard for fragility, presumably with a view to avoiding the political consequences of perceived inequitable treatment. We have seen high-profile, politically savvy international funds and organisations go unscathed while hapless and overstretched UN organisations were severely cut. We have seen the central funding mechanism for Australian NGOs, an organised pool of potential critics, grow substantially even while resources for volunteers, a pool of uncoordinated individuals, have dwindled. And, while increases in humanitarian aid are necessary and welcome, the additional resources are accumulating in a sort of political reserve, to be parcelled out to international agencies donor conference by donor conference.

If the aid budget really has stabilised in 2017-18, let’s hope that the next one is just as dull on the bottom line while being better balanced on its other lines.

[1] Aid volume is unchanged in real terms compared with last year. Most budget lines are unchanged in nominal terms. The inflation-related increase in the bottom line is used mainly to increase the provision for humanitarian contributions. A two-year suspension of inflation indexing sacrifices $303 million to ‘other priorities’ (understood to be security-related) within the foreign affairs portfolio in 2019-20 and 2020-21.

[3] I have used this framework several times before, here, here and here.

[4] Five building blocks shrank by a total of 17 percentage points and the other five grew by the same total amount.

[5] ‘On the face of it’ because administrative integration on the Australian model makes it very difficult for anybody, including DFAT itself, to determine how much is really being spent on aid policy administration as distinct from other policy and administrative functions of the department. DFAT has an incentive to maximise the amount of funding allocated to aid administration since this is provided in the form of departmental resources rather than administered resources yet still counts as aid. But it would be unlikely to allow this amount to exceed about 6% of the aid program, or would face criticism of the kind sometimes directed at the previous government. Administrative costs accounted for only about 3.5% of aid at the end of the Howard era.

[6] Funding for ‘development effectiveness and research’ is also included in this budget line in Figures 1 and 2.

[7] These are bilateral allocations. The countries listed will also benefit to varying extents from aid channelled through multilateral organisations, non-government organisations and the several regional programs that are included in Figure 3.

[8] DFAT gives Fiji’s base allocation as $35 million in both 2016-17 and 2017-18. So its allocation has grown by 30% even without the additional funding associated with Cyclone Winston reconstruction.

[9] There is no hard and fast list of fragile states, and different institutions use different. For the purposes of this post I have used the list applied by the OECD in classifying aid flows.

[10] Even if Papua New Guinea were excluded, Australia would rank second after the United States among bilateral donors to the SIDS grouping.

[11] Namely the UN Office for the Coordination of Humanitarian Affairs, the UN Refugee Agency, the World Food Programme, the UN Relief and Works Agency, the UN Peacebuilding Fund and the International Committee of the Red Cross.