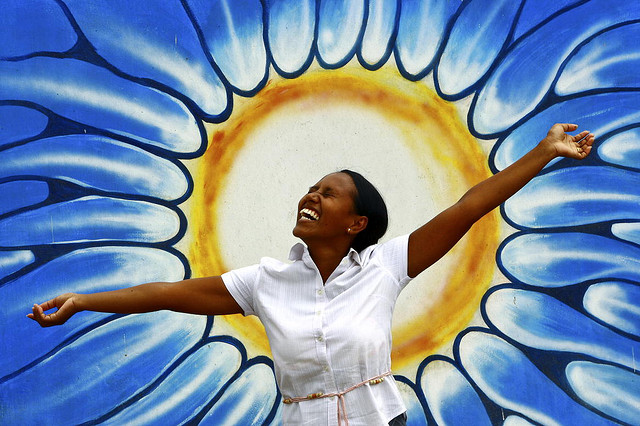 The love affair began in May 2013. I’m weak-kneed for a United Nations document with a vision, and here was one.

“We have a choice to make: to muddle through as we have done, making progress on some fronts but suffering setbacks elsewhere. Or we can be bold and set our eyes on a higher target, where the end of many aspects of poverty is in sight in all countries and where we have transformed our economies and societies to blend social progress, equitable growth and environmental management.” (High Level Panel of Eminent Persons’ Report [pdf]: p. 27)

Emerging from extensive consultations across the world, this report [pdf] outlined the way forward to the SDGs. Part of the SDG’s attractiveness has been the process of their creation. As Joy Kyriacou explains, the comprehensive consultation process is a significant achievement in itself. Working in sexual and reproductive health, an area deliberately excluded (initially) from the Millennium Development Goals (MDGs) due to its contentiousness, I have spent time skulking outside meetings in the UN basement because civil society representatives weren’t allowed in. The inclusive, exhaustive SDG process is a stand-out for the UN. This is one reason why I love the SDGs.

Another reason I love the SDGs is because, as Terence Wood argued, the SDGs have norm-setting, aspirational value. Ben Day’s interpretation is that the core problem is that the SDGs are driven by the question, “what do we include?” I disagree; the question was, and remains, “what world do we want to live in and how do we get there?” The SDGs solidify in 17 succinct goals what people from across the world said they needed to flourish as human beings and to protect our home, the Earth.

Often, driving forward aspirational norms in this way is painstaking. I have spent hours negotiating over the presence of an individual word in a UN document, discussing in hallways what compromises can satisfy. And no doubt the SDG negotiations have involved this. Yet, it is outstanding that governments have arrived at agreement on an all-encompassing text that their Heads of State can accept, and one that affirms universal human rights and gender equality as core to achieving the SDGs. I’m in love.

Perhaps my previous relationships set me up for a fall. I still have a soft spot for the 1994 Cairo International Conference on Population and Development’s Programme of Action: all 282 pages and 106 articles of it. When I’m feeling nostalgic, I open it up and flick through the articles, gooey-eyed at the words within. And the Cairo Programme of Action was only one of the several conferences in the 1990s when governments came together to agree to farsighted action agendas in many areas of human existence: environment and development, social development, gender equality and women’s empowerment, to name a few.

Here is why the SDGs won’t break my heart (unlike Terence Wood): because I don’t have unrealistic expectations of them. They won’t live up to their lofty rhetoric because they are a symbol of the ongoing relationship between people, states and global governance. They are about the never-ending struggle of political negotiation, with the aim of advancing human progress. But that doesn’t mean that they aren’t a worthwhile endeavour. Imagine if just one country achieved only one of the goals: how many people’s lives would be better for it?

The SDGs won’t break my heart because they are not a one-night stand with hopes for more. Like some others, I think it is unhelpful to compare the SDGs with the MDGs. In many ways, the MDGs were the odd ones out. The UN General Assembly never agreed on the MDGs, only the Millennium Declaration. The final goals themselves were fully developed afterwards. I can understand the rationale. Having negotiated into the wee hours of the morning over including the word ‘families’ rather than ‘family’ in a document, I can see why the UN wanted to avoid contention, even if it did mean important groups of people were neglected (like young women or persons with disabilities, for example). But this was out of character for the global policy-making body. I prefer to compare the SDGs to the human rights conventions and the agreed goals and actions from various global, intergovernmental meetings. The SDGs are part of the slow process of global change. Yet, the SDGs are more beautiful because they manage to articulate it all in 17 simple goals.

At the end of the day, the SDGs are not mine alone to love. They are ours. Thousands of people and organisations have been involved in bringing the SDGs this far. Most have done so out of a belief in, and hope for, a better future for humanity. And the SDGs embody this hope: who can’t love that?