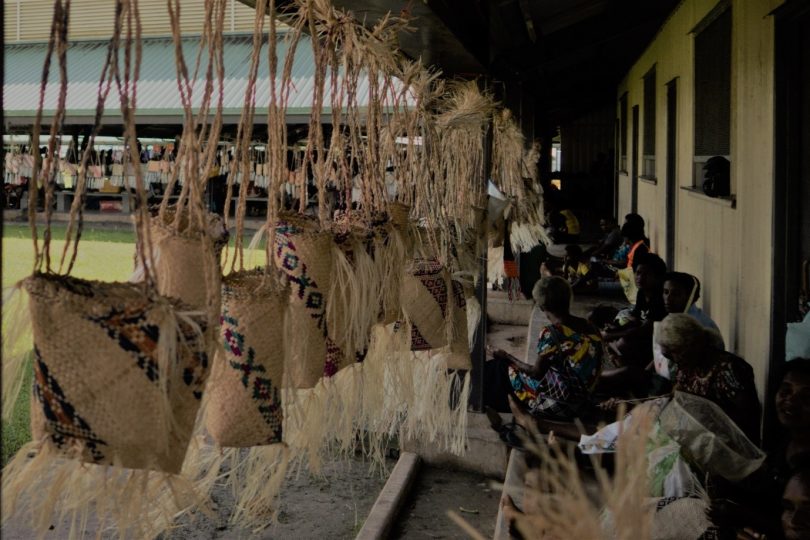 Manus Island in Papua New Guinea has again been cast into the international spotlight as the geopolitical contest for power intensifies. During the 2018 APEC meeting, China’s growing interest showed at the highest level with the President’s visit – the ‘redwashing’ of Port Moresby with Chinese flags and symbols, and the opening of several major construction projects. Australia responded by launching its own investments and, with the US, announcing a trilateral arrangement to re-establish the Manus Island naval base.

Putting aside tensions between China and the US, two issues – gender and security – are important to the relationship between PNG and Australia. For many PNG women and the daunting challenges they face, the bilateral program is a beacon of hope, and programs funded under the partnership have led to great progress. Support from Australia is critical because the PNG Government provides limited budget allocations towards issues like gender-based and sorcery accusation-related violence.

On the other hand, security, a male-dominated domain, binds PNG and Australia together. Bruce Hunt’s 2017 book Australia’s northern shield notes that, although Australia has historically viewed PNG as a shield against external threats to Australia, recent defence cooperation has moved towards mutual security interests. See this recent blog for a review of these contemporary strategic considerations and the associated risks.

In this blog, I reflect on the intersection between these two important development and political agenda as they play out on Manus Island, a stage where the bilateral relationship between PNG and Australia has been performed in recent years. Manus has historically been a strategic location not only in terms of war, but, as Hunt discusses in his book, also as an important route for trade and the military. Australia’s recent announcement only cements the importance of Manus into the future. I explore these issues through the lens of the complex racial and gendered history of colonial discourse in PNG.

The history of dominance through gendered colonial and racial discourses

PNG’s colonial and contemporary history has a deeply racialised and gendered dynamic that centres on the relationship between Australia – the colonial administrator – and Papua New Guinea – the colonial subject. Regis Stella, in his 2007 seminal book Imagining the other, highlights how literary and colonial discourses erase PNG’s history and indigenous self-representations by deploying racialised representations of PNG men with tropes like ‘childlike’, ‘savage’ or ‘sexualised’. On the other hand, colonial discourses rendered PNG women as largely invisible. Stella (reviewed here) argues that these portrayals reinforce relationships of power and inequality. His argument has contemporary significance. Christine Stewart’s 2012 Name, shame and blame (reviewed here) also highlights how the dynamics of racialised and gendered colonial and legal discourses work to control PNG subjects through the criminalising of consensual sex.

Ted Wolfers’ 1975 classic Race relations and colonial rule in Papua New Guinea notes on its first page that a ‘knowledge of race relations in the past provides invaluable insights into the roots of present tensions’. All these books highlight the colonial administration’s protection of white women from PNG men, and how these colonial discourses served to establish control over Papua New Guinean colonial subjects. Control over PNG subjects in turn served to secure Australia’s economic and security interests.

The race to gender equality and women’s empowerment

These racial and gendered dynamics have endured in contemporary PNG, with both Stewart and Stella noting that colonial power has been replaced by the power exercised by PNG’s own elites.

The dominant portrayal of PNG women today is unfortunately based on sad fact. PNG women face the worst forms of violence in the world, low political representation, and cultural and social barriers to economic engagement, and are often silenced or shut out of opportunities taken for granted by women globally.

These portrayals also serve to reinforce the subjugation of PNG women’s abilities to engage in their own self-representations. In the context of her research, Stewart (p. 251) also notes the marginality of PNG women in shaping their own narratives. One need not search far to see how portrayals of PNG women are used to great effect by local and international organisations raising funds to support and save PNG women. But the women themselves have very limited control over how funds raised in their name are allocated or spent.

Yet, it is also evident that today PNG women are not just overcoming barriers – they are engaging and leading in many domains and shaping their own narratives and self-representations.

The 2012, the bilateral agreement to establish the offshore detention centre on Manus Island opened up another chapter in the gendered and racialised dynamics of the PNG-Australia relationship. The deal, primarily shaped by Australia’s domestic politics, mixed the morality of saving lives at sea with border and regional security. It involved the the detention of a few hundred men in exchange for ‘development’ money. The arrangement unravelled messily in the following years, with violence between locals and detainees, other gendered forms of violence, and prolonged legal battles.

The media sustained the racialised narrative, pitching local men against detainees while giving little attention to the implications for gender violence. These portrayals of Manus locals have been accepted and used by both sides of Australia’s domestic debate. Manus is too dangerous for any asylum seeker to dare risk coming to Australia, and at the same time too dangerous for current asylum seekers and refugees.

Stewart (2012, p. 251) also notes that “[t]he complex intersections between race, class, kinship, culture and gender ensure that the elites must constantly strive to ensure that their dominant position is maintained.” Today, the powerful actors in PNG include PNG’s political and business elite, as well as Australia, the USA, and China, each presenting their own discourses in order to secure a dominant position.

The risks of falling into a gender diplomacy trap are multifaceted. On the one hand, some may argue that the current situation has some potentially positive outcomes. Australia may increase support toward gender as a way of garnering more popular support in PNG. However, this runs the risk of reducing the struggles of PNG women to another rhetorical diplomatic platform among the suite outlined in Australia’s Foreign Policy White Paper. If this happens, PNG women may – validly – argue that their struggles should not be used in these broader regional power struggles. On the other hand, Australia may stop talking about gender, much as it has about corruption, post-Manus, for fear of offending the PNG Government. Finally, the greater emphasis on security may, in and of itself, undermine the progress that has been made.

The issues on Manus Island highlight the complexities of the gender diplomacy trap and will continue to complicate the bilateral relationship. One could easily argue that the gendered outcomes – the violence, the racialised demonisation of Manus men, the treatment of male refugees and asylum seekers, the impact on local women, children and families – are the collateral damage of Australia’s border protection policy.

One concrete example (highlighted in this report) is a growing generation of children being born to local Manus women and former detainees on Manus Island. One could also argue that Manus women in particular have paid, and will continue to pay, the price for Australia’s domestic security imperatives. Moving forward, it is critical that we think through and respond to the gendered and racial dimensions of the heightened strategic competition in relation to PNG and the Pacific.