This week, world leaders will agree to the Sustainable Development Goals (SDGs) that will replace the Millennium Development Goals (MDGs) and shape the next 15 years of international development. The goals are very ambitious, aiming to end poverty, improve human rights and achieve environmental sustainability (among other things) by 2030. As readers of this blog will be well aware, the SDGs are perhaps best known for their complexity, encompassing 17 goals and 169 targets. To date, discussion has largely been divided between those in support of the broad, aspirational nature of the goals, and those who think the lack of prioritisation has led to a rambling agenda that has left no target behind. Nevertheless, this week the SDGs will be agreed to, which brings a number of questions to the fore: how much change is required to achieve the ambitious SDG agenda by 2030? Which goals are most off-track and will need to be prioritised? And what are the particular challenges that will face different regions?

A new Overseas Development Institute (ODI) flagship report, Projecting progress: reaching the SDGs by 2030, attempts to answer the above questions. Using projections from leading international organisations, including the World Bank, the OECD, and the World Health Organization, the report quantifies how much the world would need to accelerate current trends in order to achieve the SDGs by 2030. To make the task more manageable, only one key target is examined for each of the 17 goals. Goals are ‘graded’, based upon how close they would come to being achieved if the current progress toward the goals were to continue to 2030. An ‘A’ grade implies that current progress is sufficient to meet the target, while ‘B’, ‘C’, ‘D’ and ‘E’ grades represent a continuum of how much faster progress would need to be. An ‘F’ grade indicates that the world is currently heading in the wrong direction – there may actually be a regression in progress toward the goal by 2030. The results of this analysis are shown in the scorecard below. 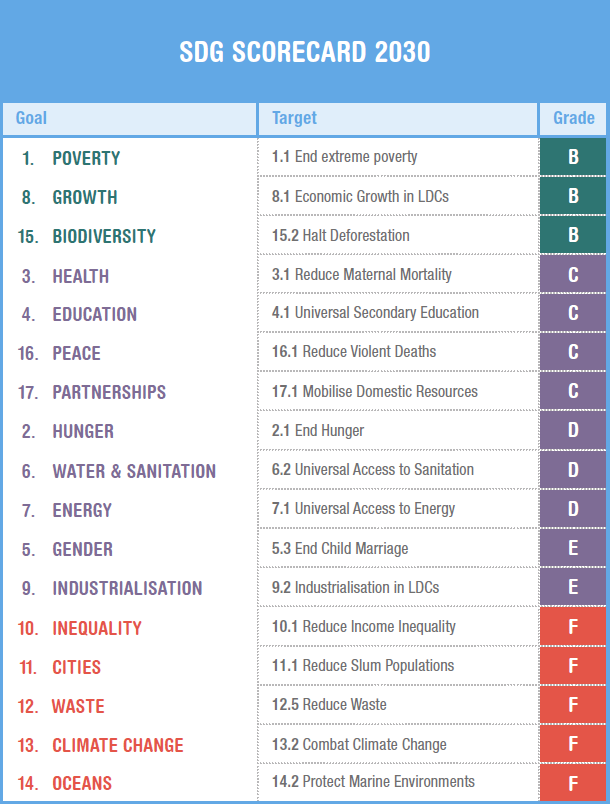 Not a single goal will be met by 2030 if current trends continue. There are no A grades. This is not necessarily a bad outcome. The goals are self-consciously ambitious, and are at least partly intended to encourage extra effort beyond current levels.

Three targets received a ‘B’ grade: ending extreme poverty, boosting economic growth in least developed countries (LDCs), and halting deforestation. The ‘B’ grade indicates that if current efforts continue the world will get more than halfway towards achieving the target.

Nine targets received a ‘C’ to ‘E’ grade, indicating that in order to achieve them existing efforts will have to be between two to eight times greater than current trends. These goals include much of the ‘unfinished business’ of the MDGs, such as improving health and education standards across the developing world. In addition, some of the ‘new’ goals fall into this category, such as those relating to peace, partnerships and industrialisation.

Five targets received an ‘F’ grade, as current progress in these areas is heading in the wrong direction. These SDGs require that the existing trajectory turn around – if it does not, the world will be further behind these targets in 2030 than it is today. These include a number of goals related to environmental issues, such as combating climate change and improving waste management, as well as reducing income inequality.

The scorecard is based on global projections. However, the report also highlights that there is likely to be substantial variation both between regions, and between goals within regions. For example:

This analysis should not be interpreted as a predetermined outcome. Instead, it should serve as a wakeup call that if the SDGs represent ‘the future we want’, then a rapid acceleration in current progress is required to achieve these ambitious goals. Simply maintaining the status quo won’t be enough. Radical change is required. The good news is that this has happened before. In fact, many of the SDGs would be within reach by 2030 if the world could replicate the progress of some of the top performing countries over the MDG era. However, change will need to begin immediately and countries must not delay implementing the SDGs at a national level. Each additional day that the current rate of progress is just maintained will make it that much more difficult to achieve the SDGs by 2030.

Chris Hoy is a Research Officer at the Overseas Development Institute, and co-author of the ‘Projecting progress’ report. He has previously worked for UNICEF, AusAID and the Australian Treasury. He has a Masters in International and Development Economics from Yale University.

The Development Policy Centre will host a panel discussion focussing on the ODI report ‘Projecting progress: reaching the SDGs by 2030’ on Thursday 1 October at ANU. Find more details and register here.