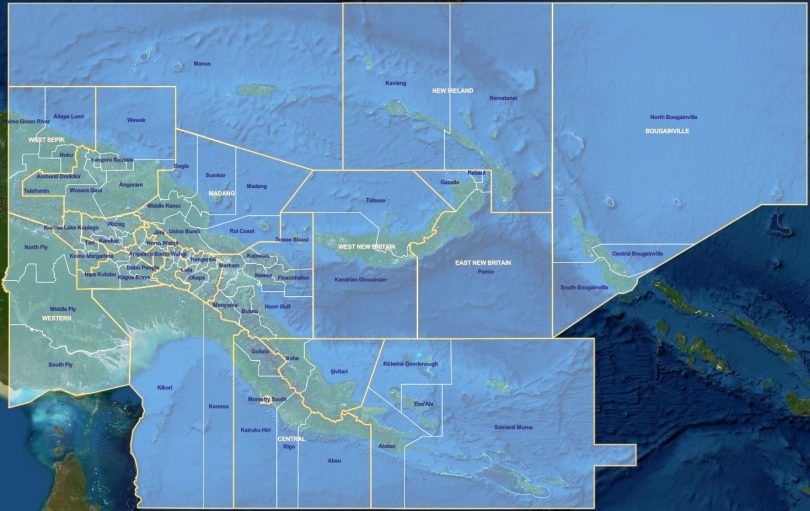 Populations vary greatly between open electorates in Papua New Guinea (PNG) – a problem called malapportionment. Malapportionment is a concern because it violates a basic democratic tenet, that everyone should be equally represented in parliament. In PNG, malapportionment brings other practical problems, such as preventing some spending from being fairly distributed on a per capita basis – for example, the District Services Improvement Program (DSIP), which is allocated equally to open MPs. In this post, I describe the extent of malapportionment across open electorates, and discuss how redistricting may be conducted, and its associated risks.

In a country like PNG, where voter rolls are inaccurate, the best means of measuring malapportionment is using census data. However, PNG’s next census has been delayed until 2024. This leaves us with the 2011 census, which was not well run, but its data are adequate to get a sense of malapportionment in PNG. 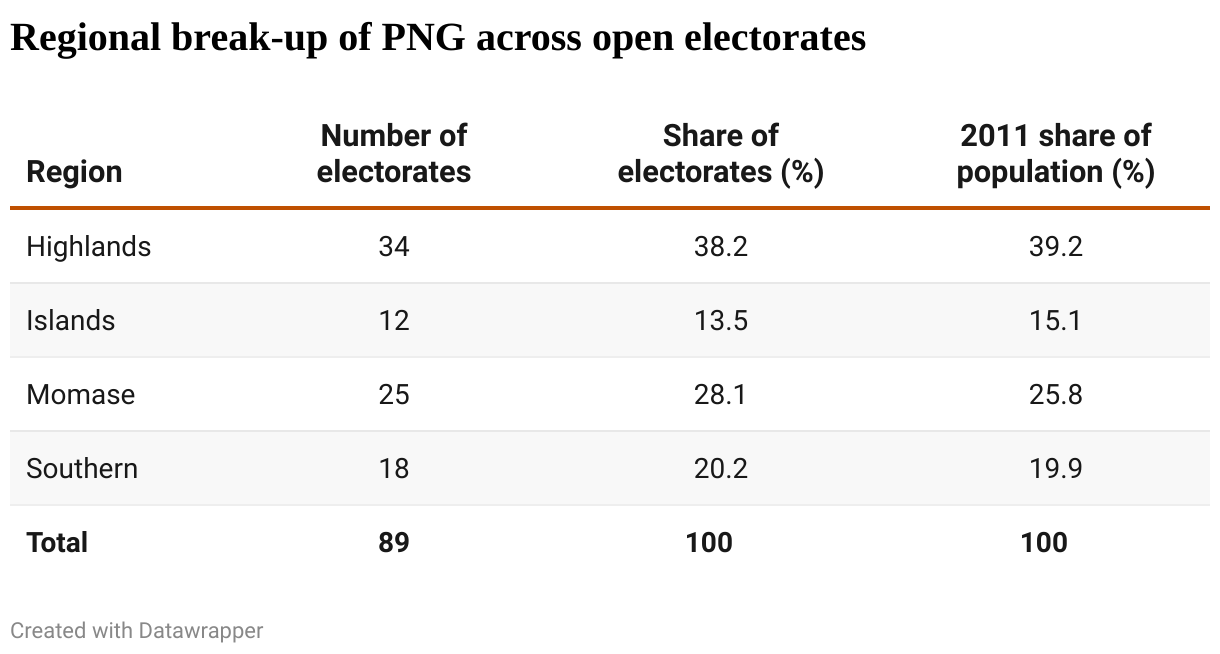 However, when we look at individual open electorates, problems become apparent. In 2011, the largest electorate was Anglimp-South Waghi (Highlands), which was 5.4 times more populous than Goilala (Southern), the smallest electorate. A big difference, and when I compared 2011 data to 2000 census data, I found malapportionment had worsened over time. 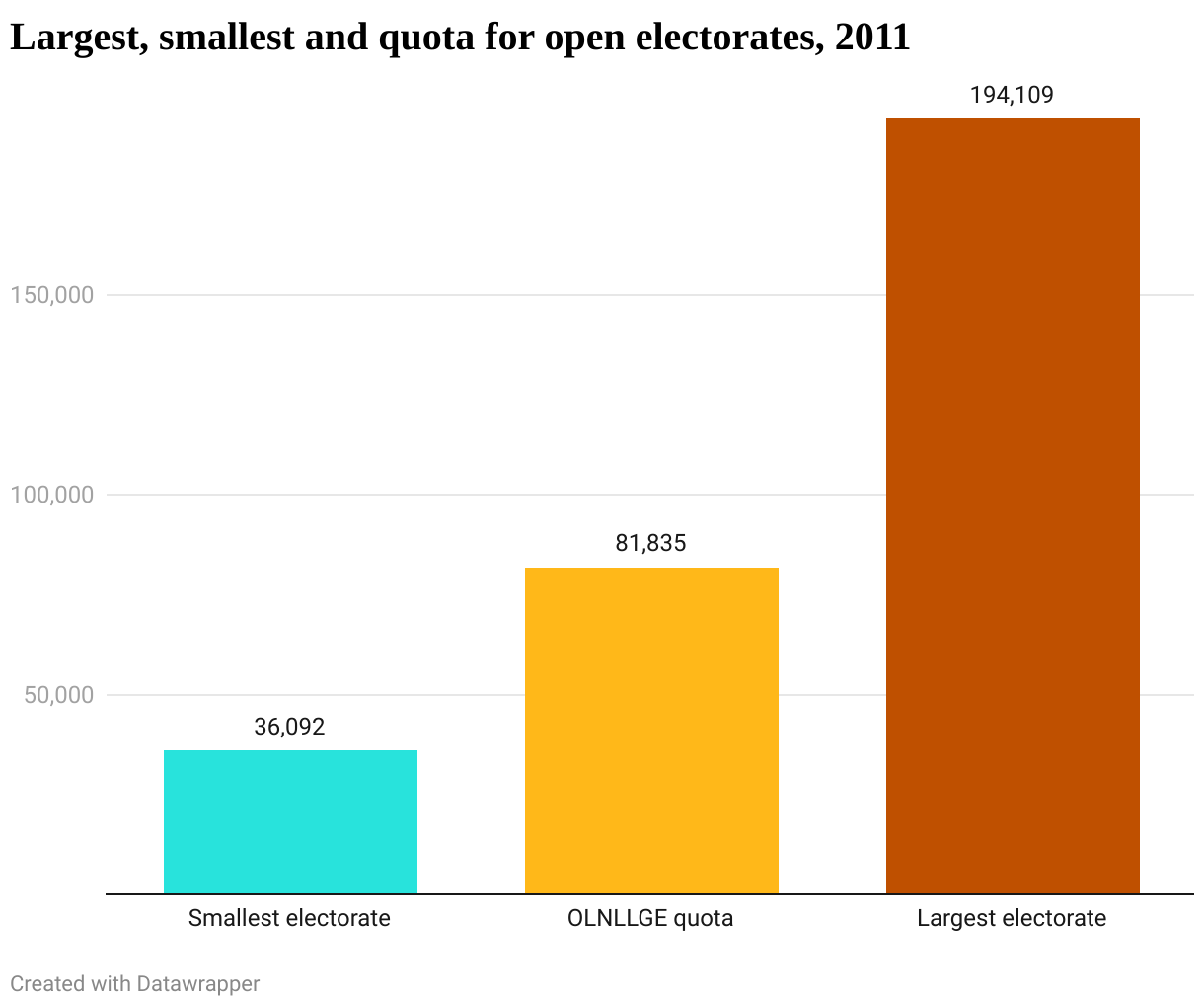 Malapportionment needs to be corrected through redistricting, where boundaries are redrawn so that populations are more fairly distributed across electorates. As the table below shows, much of the redistricting needs to happen in the Highlands and Southern regions. Although in theory, redistricting could potentially involve amalgamating smaller electorates, the most likely approach for PNG would be splitting larger ones. 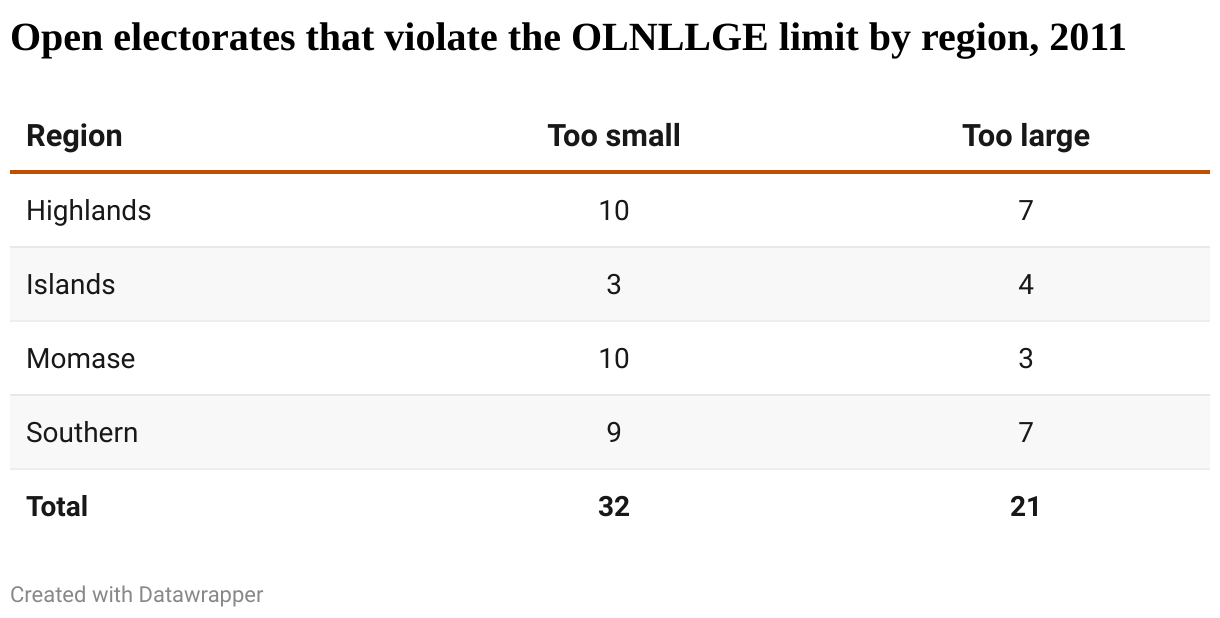 The OLNLLGE states that the number of open electorates in PNG can range between 110 and 120, and allows for a maximum of 31 new electorates in addition to the 89 existing electorates.

As other countries, such as the United States, have shown, a risk when redistricting is the possibility of gerrymandering (the redrawing of electoral boundaries to favour certain politicians or parties). According to the OLNLLGE, the Electoral Boundaries Commission (EBC) must comprise six members, half of which are ex-officio: the Electoral Commissioner (chair), the head of the Surveyor-General’s Office, the head of the National Statistics Office, and three members appointed by the Governor-General. National MPs, members of provincial assemblies or local level government, or office-holders of registered parties cannot be appointed. These restrictions would seem to protect against gerrymandering. However, a risk remains that gerrymandering might occur through government’s influence over members of the EBC, both ex-officio and appointed.

No redistricting has occurred since independence. The EBC conducted reviews in 1981, 1985-86, 1991, 2005-06 and 2011, but its recommendations to parliament were rejected (the OLNLLGE does not permit parliament to amend the EBC’s recommendations). In 2005, the EBC recommended 26 new open electorates, reflecting 8, 6, 6, and 6 new electorates in the Highlands, Islands, Momase, and Southern regions, respectively. All provinces then were recommended one new electorate, except Madang (2), Morobe (2), West New Britain (2), and Southern Highlands (4).

It’s unclear in any case whether the 2005 recommendations (and those of other years) would have successfully tackled malapportionment. Though new electorates were distributed almost equally across provinces, malapportionment isn’t distributed in this way. Possibly, the EBC sought what it thought would be most politically acceptable – distributing new seats more or less equally. (Its 2005 report stated additional seats were recommended in provinces such as Manus, Western, Chimbu, and Gulf on grounds other than population.)

Recently, the EBC announced its latest attempt at redistricting, which involves creating 22 new open electorates by splitting open electorates in 18 provinces (excluding Bougainville, Chimbu, Eastern Highlands, and the National Capital District). These recommendations will not successfully address malapportionment, as a number of electorates that were too small in 2011 are recommended for splitting. The recommendations are yet to be brought to parliament.

Efficacy requires that correcting malapportionment be foremost in guiding the EBC. Action requires parliament to actually accept the recommendations.

There is no easy solution. MPs have various reasons to oppose redistricting. First, more open electorates mean more resources to those provinces that gain new electorates, and MPs from provinces that don’t will oppose this. Second, more electorates mean more political rivals to existing MPs in provincial assemblies. Third, existing MPs will be sceptical that redistricting will favour them, given politics at the open electorate is dominated by local issues, and victors garner on average only a small share of total votes.

Nevertheless, action is needed. Malapportionment is getting worse in PNG. Accuracy and feasibility may both be assisted if the redistricting exercise is delayed till 2024, when new census data is available.

This research was undertaken with the support of the ANU-UPNG Partnership, an initiative of the PNG-Australia Partnership, funded by the Department of Foreign Affairs and Trade. The views are those of the author only. The author is grateful to Dr Terence Wood for comments on earlier drafts. Population data are from the PNG National Statistics Office’s website.