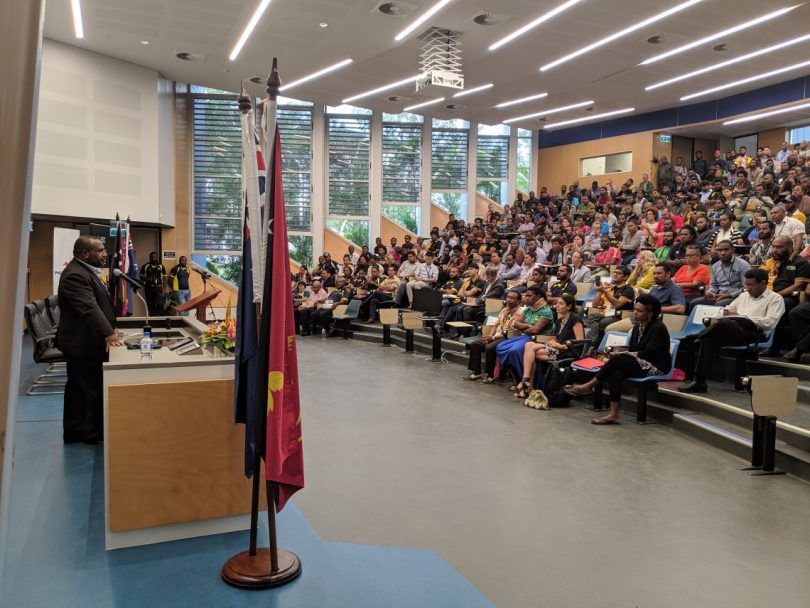 PNG PM James Marape speaking to the closing session at the 2019 PNG Update.

In a year of historic visits, historic spats, ongoing China drama in the media, and big political change in PNG, it’s no wonder that our year on the blog has been dominated by the growing hunger for analysis on the Pacific region. But Australia had an election in 2019 as well, and while not much changed in a big picture sense as the Coalition government took power for its third term, there has still been a strong appetite for analysis of the aid budget and priority areas for Australia’s engagement with aid and development, including topics beyond aid like labour mobility.

As always it is hard to pick the best of a jam-packed year on the Devpolicy Blog, so this year we have summarised the top posts by the various ‘hot topics’ — with a few of our other favourites thrown in for good measure. We hope you enjoy this summer picnic spread of our 2019 analysis from the blog.

This year saw an early budget delivered in April, adding to the cumulative cuts under the Coalition government that started in 2013. Stephen Howes emphasised the incoherence of Australia’s aid budget, particularly in relation to economic rhetoric and its Pacific obsession. He argued: ‘It cannot be the case that aid to the Pacific is so important that it has to keep being increased, and aid to Asia so unimportant that we should continue cutting it.’ A coalition of feminist analysts from Australian NGOs also highlighted the gendered aspects of the repeated cuts.

In the lead-up to the May election, we compared the policies of major parties on aid and other development issues such as climate change and migration. After the vote, Stephen Howes looked at the Coalition’s likely approach to aid in its third term, arguing that positive changes were possible. Later in the year, he argued that the Pacific push was overlooking governance issues, and condemned the cutting of aid to Pakistan.

On the fickle nature of the Australian public and their support for aid, our research showed that national interest arguments could make the biggest impact on those who thought we should give less, followed by altruism. Also, perhaps unsurprisingly, being told about China’s growing aid program, particularly with an alarmist tone, could also change views.

Unfortunately though, Australian donations to development NGOs are on a slide, according to the latest available data. In better news, women in leadership roles in Australian NGOs increased to more than 50 per cent (bucking persistent issues in humanitarian leadership globally).

Across the ditch, New Zealand’s aid budget turned a corner, even if it hadn’t quite ‘shifted the dial’ yet.

Our 2018 Australian Aid Stakeholder Survey, released in February, showed that the use of facilities (large private-sector operated aid clusters) were one of the new issues that had emerged since the last survey in 2015, with a majority of both aid contractor and NGO executives saying they had reduced effectiveness.

Stephen Howes kicked off a debate on the blog around facilities by discussing the survey results and proposing a state-owned implementing facility. Facilities do have friends though — Erin Anderson argued for their flexibility, Colin Adams said they were the right modality for effectiveness in some contexts, while Scott Bayley made the case for improved evaluation and clear goals. Facilities are no silver bullet, said David Green, but are ‘worth a try’.

Nemat Bizhan continued his analysis of development issues in Afghanistan, including on building state effectiveness, youth protest movements and the country’s ‘flawed’ peace process. The International Convention on the Rights of the Child celebrated its 30th anniversary, and the leaders of Australia’s child-focused NGOs wrote on the unfinished agenda of the convention. Refugee issues continued to simmer for Syria, and a proposed ‘safe zone’ for refugees within the country’s border was condemned by those in the sector.

Sarah Garap’s call to donors to do better at supporting grassroots organisations delivered some hard truths. Elizabeth Reid delivered a dose of inspiration during her acceptance speech for the 2019 Mitchell Humanitarian Award. Bobby Anderson looked at some of the myths of community-driven development, while Annalisa Prizzon provided advice for countries transitioning from low-income to middle-income status.

Solomon Islands headed to the polls in April, returning Manasseh Sogavare to the Prime Ministership. Terence Wood looked at some of the issues after the vote, and the impact of constituency development funds.

We continued to dive into the data from the 2017 PNG elections, looking at gender (here and here) and electoral boundaries.

The biggest and most anticipated vote in the region this year had to be the Bougainville referendum, where Bougainvilleans overwhelmingly voted for independence from Papua New Guinea. In the lead-up, Kylie McKenna called it PM James Marape’s ‘biggest challenge or biggest opportunity’, while Gordon Peake and Miranda Forsyth looked at what the effectiveness of a referendum booze ban could teach about implementing policy post-vote.  Elsewhere, Timor-Leste celebrated 20 years since its self-determination referendum — Jake Lasi, a Timorese student, reflected on the occasion.

PNG coverage was dominated by the dramatic change of Prime Ministers in May with James Marape replacing Peter O’Neill, who had served in the role for eight years. A range of commentators wrote on this for Devpolicy: Bal Kama looked at the implications for the political climate; Henry Ivarature discussed the parliamentary and court developments; Michael Kabuni looked at the winners and losers; while Michelle Rooney examined the historical context. Former anti-corruption head Sam Koim provided some advice for the incoming PM. Stephen Howes reflected on O’Neill’s legacy as Prime Minister. Maholopa Laveil looked (sceptically) at the numbers on the new PM’s goal to make PNG the ‘richest black Christian nation on planet earth’ within a decade, while Bal Kama wrote on Marape’s vision to ‘take back PNG’.

Some of the big topics included the barriers to skilled migration from the Pacific, and the lack of non-seasonal work opportunities. Ryan Edwards wrote a series on issues around brain drain (here, here and here), while Richard Curtain looked at labour demand.

Stephen Howes argued that a real Pacific step up would be to move beyond temporary migration solutions for the region to look at more permanent options.

In horticulture, visa debates prevailed — data showed the increasing use of the backpacker visa for agricultural work, as calls for a new agriculture visa continued. Beth Orton reported on changes to the Horticulture Award and possible impacts, and Henry Sherrell questioned whether there really were agricultural labour shortages.

On the Seasonal Worker Program, numbers in Australia finally surpassed those on New Zealand’s equivalent scheme. We looked at why some countries, such as Tonga, had been so successful at uptake, and some of the lasting impacts from returned workers in Vanuatu. And we interrogated the early results from the new Pacific Labour Scheme.

Rochelle-Lee Bailey continued to talk to workers and communities, visiting Koo Wee Rup in rural Victoria. Kalomel Sepa, a repeat seasonal worker from Vanuatu and avid photographer, provided a personal testimony on what it is like to work in New Zealand’s RSE scheme. Flippant comments from Australia’s Deputy Prime Minister on seasonal work and climate change angered many.

James Webb’s series on Kiribati provided insights into the economy and how the country may do after its graduation from ‘least developed country’ status (here, here, here and here). Jo Spratt wrote on the neglected issue of palliative care availability in the Pacific islands (here and here). Grant Walton and Sinclair Dinnen examined the massive private security industry in PNG (here), while Grant also continued his work on anti-corruption messaging and reforms (here and here). Busa Jeremiah Wenogo brought us into the world of Port Moresby’s street mechanics, demonstrating the value in the country’s informal sector, while Mike Rose took us to Timor-Leste through his contributions, discussing megaprojects in Oecussi, the country’s international airport dilemmas, and more.

If you’re looking for some summer reading, browse the blog, have a look at our Aid Profiles series or various publications. Our podcasts are also great for long flights and car trips. If you are planning a tropical holiday, Timor-Leste, Kiribati and Vanuatu’s outer islands are all seeking your tourism dollar based on blog posts we have published this year, while Tom Bamforth took us to Tuvalu with an excerpt from his new book. Luke Kiddle painted an intriguing picture of Levuka, Fiji.

As this is our last post for 2019, we’d like to say thank you to all of the authors who have contributed close to 300 posts to the Devpolicy Blog this year. Only about half our posts come from Devpolicy staff. We are able to post material on a daily basis because of the contributions of writers from all around Australia and indeed the world. Thank you everyone! We wish you all a merry Christmas and happy new year, and we’ll be back on 13 January 2020.